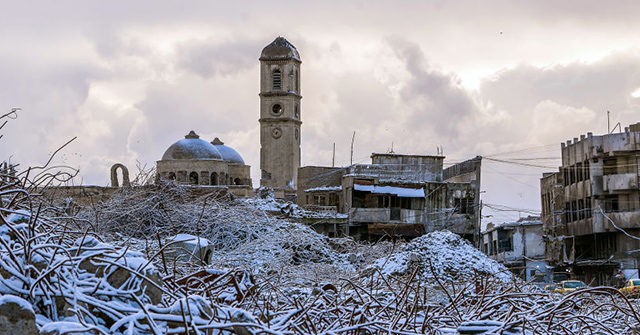 Members of Iraq’s persecuted Christian community attempting to return home over three years after the Islamic State’s “caliphate” fell are struggling to resettle, multiple reports highlighted Sunday, as Muslim militias and fraudsters have stolen many of their homes, while others lie in ruin.

Once one of the largest religious communities in the country, even the most generous estimates of Iraq’s Christian population — made up of Chaldean Catholics, Assyrians, and others — place the number at about 500,000, significantly lower than the millions believed to live there in the past century. Iraq is one of the first places on earth where large populations adopted Christianity and is often referred to as its “cradle.”

The worst persecution to recently befall Iraq’s Christians occurred during the Islamic State occupation, which began in 2014. The jihadist group sought to convert or kill all Christians in the country to establish a fundamentalist “caliphate.” As thousands fled, jihadists stole their homes and belongings. In cities like Mosul — which had a population of 2 million people before ISIS conquered it — complex sets of explosive traps left behind when the Islamic State lost control in 2017 have destroyed entire neighborhoods. Airstrikes during the battle to liberate the city also caused substantial damage to property and infrastructure.

The Christians who have returned to Mosul, a small number compared to estimates of the population before the ISIS siege, told the Kurdish outlet Rudaw on Sunday that the Iraqi government has done nothing to help them rebuild their lives.

“This is my house. I bought it for a handsome amount of money. It is uninhabitable. How am I supposed to live in it?” a Christian man identified as Joseph Gabriel told Rudaw in front of his home in Mosul. “I should be compensated in order to be able to cover the cost of repairing my house, to reside in it with my wife.”

Rudaw estimated, citing local clergy, that 50 Christian families had returned to Mosul since the fall of the Islamic State in 2017. The city was believed to be home to hundreds of families prior to the occupation.

In an article Monday, the Agence France-Presse (AFP) similarly observed that, throughout Iraq’s Christian homelands in the north, Christians attempting to resettle have struggled to reinhabit their own houses.

“Fleeing war or threats of persecution, Iraq’s Christians left behind thousands of homes in recent years — returning to find them occupied by militiamen or secretly sold using fabricated deeds,” AFP reported. “Getting those houses back, families, clergy and officials told AFP, is a dizzying bureaucratic process that usually ends in failure.”

Many of the incidents documented by AFP occurred in Baghdad, about 250 miles from Mosul. Baghdad has a much largest Shiite Muslim population than Mosul and the Iraqi government is dominated by Shiite politicians. Baghdad also legalized a coalition of Iran-backed, mostly Shiite militias known as the Popular Mobilization Forces (PMF) during the fight against the Islamic State and many militia fighters have resettled in the capital.

“Before 2003, Baghdad counted a diverse Christian population. But once sectarian bloodletting began, they fled to Iraqi Kurdistan or abroad, leaving their homes in the care of relatives or Muslim neighbors until they could return,” AFP narrated. “Within months, many discovered that other families had moved in, claiming to be the real owners, or that armed factions had turned their homes into command centers.”

Speaking to AFP, Iraqi politicians claimed to have returned 26,500 stolen homes to their rightful owners, but only 50 of those originally belonged to Christians.

Elsewhere in Iraq, Christians have struggled to return to normalcy as they live in areas targeted by Turkey’s ongoing aerial invasion of the country. In Duhok, part of the Kurdistan Regional Government (KRG), Turkish officials have claimed members of the Kurdistan Workers’ Party (PKK), a Marxist terrorist group, have established a base. The KRG opposes the PKK and has requested its members leave the area. In some areas, particularly those once targeted by the Islamic State, PKK fighters stayed during the ISIS invasion and participated in protecting minority groups from the jihadist organization, earning them some civilian support.

Turkish bombings of Duhok have complicated attempts by Christians to rebuild their lives in the territory, Rudaw reported Sunday. Some have given up attempting to remain there.

“Our security situation is very bad. We do not dare bury our dead ones in the village cemetery,” Shlimon Atheel, a Christian speaking to the Kurdish outlet, said. “It has been four years since we did not go to our church [fearing airstrikes]. We do not dare to go. It has been four years since our water supply was cut. We cannot even fix it, because of jets and artillery fires.”

“Operation Claw-Eagle,” a bombing campaign in Iraq by the Turkish military, began in June, targeting northern Iraqi regions home to large Kurdish and some Christian populations. Ankara insisted that attacking alleged PKK positions within the KRG was necessary for Turkey’s national security, ignoring demands from both the KRG and the Baghdad government to stop invading the country.