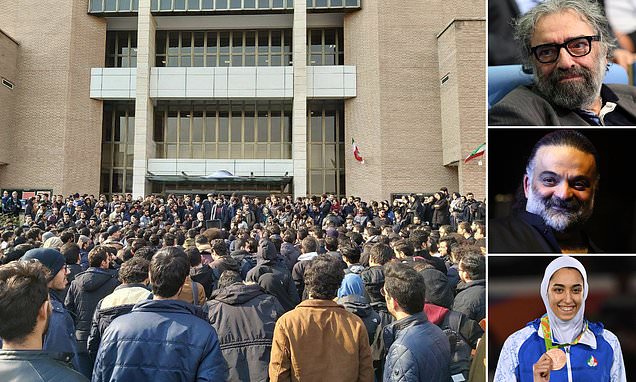 Director Masoud Kimiai (pictured) has pulled out of Tehran's annual…

Anti-government protests in Iran have entered a third day today after Tehran finally abandoned its pretence and admitted shooting down a passenger jet.

Dozens of protesters chanted slogans at a Tehran university today amid a wave of public anger after the plane was shot down with dozens of Iranians on board.

A string of Iranian celebrities have also turned on the regime and two state TV hosts have quit over Tehran’s three days of false reporting on the crash.

Leading Iranian film director Masoud Kimiai has pulled out of Tehran’s annual Fajr Film Festival in protest, saying he was ‘on the side of the public’.

A prominent singer, Alireza Assar, has also cancelled a concert in a bid to show support for the protests which resumed over the weekend.

Iran‘s only female Olympic medallist Kimia Alizadeh has already announced her defection from the Islamic republic, piling further pressure on the regime.

Tehran is now signalling de-escalation in the stand-off with the United States which had sparked fears of a Middle East conflict.

Dozens of protesters gathered at a Tehran university today where demonstrators chanted: ‘They killed our elites and replaced them with clerics.’

Students were heard chanting ‘clerics get lost’ outside universities in the city of Ishafan, a major city south of Tehran.

The capital’s police chief claimed today that the security situation in the capital was ‘fine’ despite the protests, with riot police deployed to face the protesters.

General Hossein Rahimi denied reports that police had shot at protesters and said officers had been ordered to show ‘restraint’.

‘The police treated the people who had gathered with patience and tolerance,’ he said before the latest protests broke out.

Anti-government protests resumed in Tehran at the weekend with pro-regime gunmen accused of opening fire on demonstrators yesterday.

Riot police armed with water cannon and batons were seen at Amir Kabir, Sharif and Tehran universities as well as Enqelab Square, while there was also a heavy police presence around the iconic Azadi Square.

Last night students packed the gates of Amirkabir University of Technology near the former US embassy to protest against Iran’s supreme leader, Ayatollah Ali Khamenei.

Protesters chanted ‘Death to dictator’ and against the Revolutionary Guards, Fars news agency said, a rare move for a country where media usually refer to demonstrators as ‘rioters’ and refrain from publishing such slogans.

A vigil for the crash victims on Saturday night turned into an angry protest and police temporarily arrested the British ambassador for being there.

Rob Macaire was called in to the Ministry of Foreign Affairs to explain his ‘illegal and inappropriate presence’ at the protests.

The diplomat said he been attending a vigil for the victims of Flight PS752, when protests broke out and he left.

Protesters at the vigil shouted ‘death to liars’ and demanded the resignation and prosecution of those responsible, Fars news agency reported, saying that police ‘dispersed’ them.

Fars also reported that police had ‘shot tear gas in some areas.’

The UK government said the ambassador’s arrest was a ‘flagrant violation of international law’ and said Iran was marching towards ‘pariah status’.

Today the UK said it would summon the Iranian ambassador in London to convey its ‘strong objections’ about the ‘unacceptable’ breach of protocol, while Iran released footage of him at the vigil.

Foreign Secretary Dominic Raab told the House of Commons that Britain was keeping the security of its Tehran embassy under review amid the protests.

Downing Street also suggested that families of Flight 752 victims could claim compensation from the Iranian government.

Meanwhile Germany demanded today that Iranians be allowed to ‘protest peacefully and freely’ and express their ‘grief and also their anger’.