Inquirygate: Did Pelosi Just ‘Prorogue’ The US House? 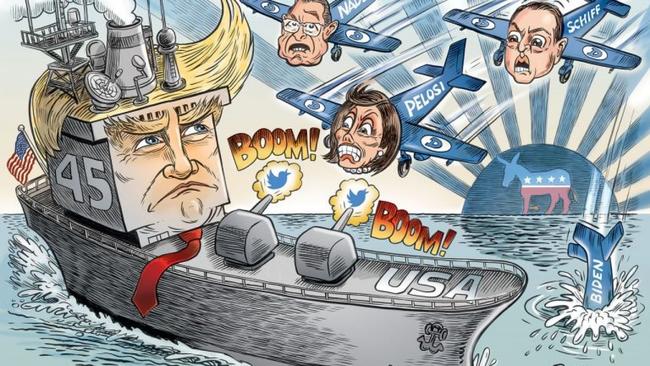 Inquirygate: Did Pelosi Just 'Prorogue' The US House?

Authored by Raul Ilargi Meijer via The Automatic Earth blog,

It took just 4 months after the deplorably failed Mueller probe of alleged Trump links to Russia, for the Democrats to raise the next -faded- red flag, Ukraine. And they do so in a manner that reminds me, personally, a lot of what happens in the UK. That is, the process has now moved on to what is legal or not and who decides what is or not.

Nancy Pelosi apparently has been told by her legal advice that it’s okay for her to move ahead with an inquiry, that she can even label an Impeachment Inquiry, without following established Capitol Hill procedure. Needless to say, them slopes are mighty slippery. Because if true, it would mean she can call the ‘other side’ offside for as long as she wishes.

She would, in effect, prorogate the US House the same way Boris Johnson tried to do Parliament in Britain. And not by shutting it down from the outside (Boris as PM) but from the inside (using her powers as Speaker). It would appear it’s time for every American to pay attention, because this could have grave consequences far into the future.

Pelosi’s plan is to not have a House vote on initiating the inquiry, but to just go ahead and have one, and stealing the name Impeachment Inquiry for it. Why? Because she thinks that way she can have only Democrats ask questions, issue subpoenas etc., while House Republicans could only sit and watch the spectacle (not what they were elected for).