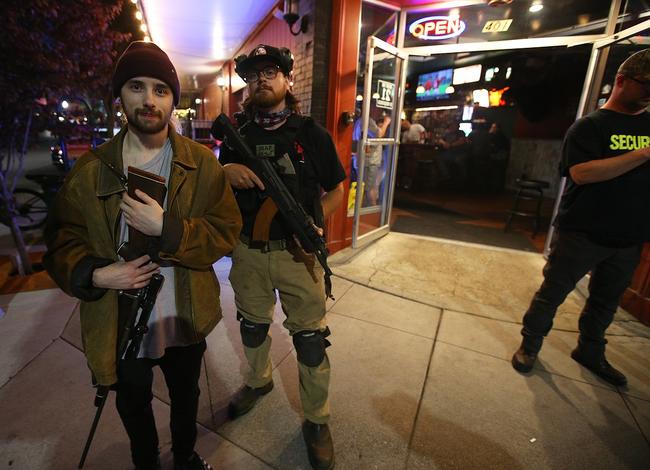 "Everybody's out and strapped... getting ready for the invasion."

Amid rumors of mass protests and riots in the northwest Idaho city of Coeur d’Alene, some locals weren’t having it, and armed themselves to patrol city streets lined with small businesses.

It’s a trend giving rise to fears that violent armed clashes between different American factions are imminent. Already videos from cities across the nation have depicted counter-demonstrators taking matters into their own hands as police retreat.

“Reports and rumors that groups bent on rioting and violence in Coeur d’Alene brought out men and women with guns on Monday determined to stop them if they arrive,” local Idaho media reported.

Groups of loosely affiliated ‘Proud Boys’ and armed ‘patriots’ began lining the streets of downtown Coeur d’Alene over reports left wing militants and Antifa anarchists were planning to cause mayhem in the area:

Soon, more armed men, self-described as a loosely formed group of patriots, arrived. They took up posts at corners on both sides of Sherman Avenue.

Later, they were joined by hundreds of citizens packing rifles, semi-automatic weapons, handguns, and bows and arrows.

The sidewalks were packed with people walking up and down Sherman Avenue, firearms proudly displayed for all to see.

They carried guns, had them holstered around their hips and had them strapped across their backs.

More of the same in downtown Coeur d’Alene as people are armed, saying they’re protecting the city. They say there have been a few protestors here today, but it’s been pretty quiet.

They say they’ll be here as long as they need to be tonight to keep the city safe. @kxly4news pic.twitter.com/ZtEZlkKBPJ

As it turns out, a group of Black Lives Matter protesters did in parts of the city briefly face off with the ‘protect Idaho’ group of armed locals, however, the scene stayed peaceful and without incident, dispersing relatively early into the evening as the police monitored the situation.

Ultimately it appeared that in the downtown area it was only the armed patriot group which was out in force, unopposed. But the armed citizens patrols were in such large numbers they effectively took over the streets.

Our beautiful home sweet home of North Idaho!! God bless our patriots, law-enforcement, & peaceful protestors (we support you) you are welcome! Those of you who incite violence, to destroy our communities will be met with a force in the likes of which you have never seen! #NIdaho pic.twitter.com/JKyUrLzqSD

It’s a scene that’s also played out in places like Texas, where smaller towns and rural areas have vowed to keep rioters far away, also as individual citizens practice ‘open carry’ in states where it’s permissible.

“I’m telling you… if you guys are thinking about coming to Coeur d’Alene to riot or loot, you better fuckin think again, because we ain’t havin it over here.”

“Everybody’s out and strapped… getting ready for the so-called invasion.”

But the trend suggests it could take a single ‘incident’ to spark a deadly encounter between such armed ‘citizens patrol’ groups and Antifa, BLM, or left-wing militants in locations across the nation.

As hundreds protest in Upland, tensions are now rising between Trump supporters and George Floyd Activists. Currently police are monitoring the protest. pic.twitter.com/Yql1rgy1g2

Given that local and state police can barely handle the growing riots and random destruction as it is, such a scenario would send things escalating to far more violent proportions at flashpoints across the US.

During the early momentum of riots taking over Minnesota’s twin cities – ground zero for the initial George Floyd protests that began late last week – local and state police came under intense criticism as they retreated from riot-hit parts of the city, leaving business owners to watch helplessly as their stores and in some cases homes burned the ground.

This and other scenes of lawlessness have resulted in a growing trend this week of armed ‘citizen patrols’ – adding to a potentially deadly combustible mix amid increasingly chaotic unpredictable scenarios on American city streets.

Published in Crime, Second Amendment and US News