Hunter Biden, 49, IS the father of Arkansas woman’s child, paternity test confirms and the 28-year-old is demanding child support for their baby, who is eligible for Secret Service protection because of grandpa Joe’s political status 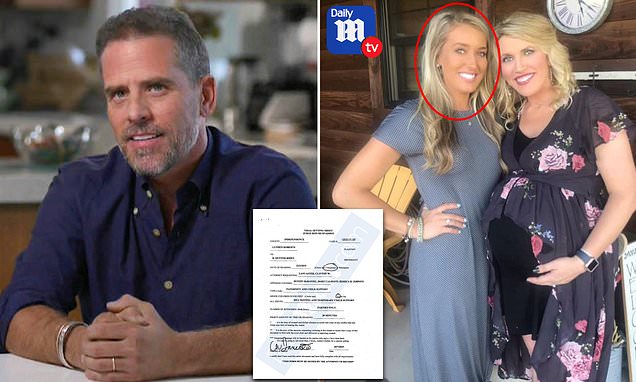 Lunden Roberts, 28, has been demanding since May for Hunter,…

Hunter Biden is the father of an Arkansas woman’s child, DNA testing has shown, according to court records obtained by DailyMail.com.

Lunden Roberts, 28, has been demanding since May for Hunter, 49, to take a test to prove he is the father of her baby, despite his continued denials that he wasn’t.

Court papers filed in Independence County on Wednesday state: ‘The DNA testing has established with scientific certainty that [Hunter] is the father of the plaintiff’s child.’

Hunter is not expected to challenge the results, according to legal documents.

Roberts is demanding for Hunter to pay her $11k legal fees and child support for their baby, who she argues could be eligible for Secret Service protection because of grandpa Joe Biden.

She is also seeking for the court to seal case records to protect the child’s identity out of fear of safety for the baby and Roberts’ family, citing presidential candidate Biden’s political status.

In previous filings, Roberts said her child was born in August last year. That would make the child’s current age around 15 months. She referred to the infant as ‘Baby Doe’ and did not say whether it is a boy or girl.

Roberts’ legal team argues: ‘Baby Doe’s paternal grandfather, Joe Biden, is seeking the nomination of the Democratic Party for President of the United States of America. He is considered by some to be the person most likely to win his party’s nomination and challenge President Trump on the ballet in 2020.

‘The members of the Biden family either are protected or eligible to be protected bu the United States Secret Service as a direct result of Joe Biden’s political status.’

‘Baby Doe’s paternity could put the child and those close to the child at risk of harm for the same reasons the Biden family is protected by the United States Secret Service.’

Roberts filed a petition for paternity and support in May, saying Hunter was the biological father of her baby, asking the court to establish paternity while seeking child support, health insurance and legal fees.

Hunter had previously denied all allegations and demanded the suit be tossed.

Last month, Roberts claimed Hunter had privately admitted to her that he is the father but continued to deny it publicly, demanding Hunter to take a paternity test.

The most recent filing comes as Hunter continues to face intense scrutiny over his shady business dealings in Ukraine and whether or not his father Joe Biden, then vice president, used his influence to avoid his son’s prosecution.

In her lawsuit, filed on May 28, Roberts said she and her baby are living in Independence County, Arkansas, which includes both Batesville and Southside.

Her friends and family held a baby shower for her shortly before she gave birth.

Roberts, who lived in Washington, D.C. for two years where she studied at George Washington University, has refused to comment on her relationship with Hunter, who is more than 20 years her senior.

A man at her family’s isolated home in Southside, a town just outside Batesville, Arkansas, refused to speak, telling DailyMail.com: ‘There’s no story here.

‘I don’t mean to be rude but you have to leave.’

Her attorney Clinton Lancaster did not return calls from DailyMail.com. He told The Arkansas Democrat Gazette that Roberts wants to be left alone but he confirmed she is seeking money from the former vice-president’s son.

‘She really values her privacy. This is a parenting and child support issue between her and Mr Biden,’ Lancaster said.

‘She just wants this baby to get financial support from the baby’s father, Lancaster added.

Roberts was a star basketball player at Southside High School and then went on to play for the University of Western Illinois before transferring to Arkansas State, where she played for the university’s team, the Red Wolves.

According to the university, she was named to the Arkansas All-State team during her high school senior year and also played in the all state softball game. Her bio said ‘she also enjoys hunting and shooting skeet.’

Her Western Illinois coach Leslie Crane said during her time there: ‘Lunden is a great ball handler and can finish at the glass or with a jump shot. She is very savvy on the floor and has a lot of game experience.’

She graduated from Arkansas State in 2014 with a Bachelor of Science Degree in Interdisciplinary Studies. She then went on to study at the George Washington University in Washington D.C., where she did not complete her masters degree in crime scene investigation.

Hunter Biden has been surrounded by controversy over the past few years and it is feared his escapades could affect his father’s chances of winning the Democratic nomination for presidency.

He was discharged from the US Naval Reserve in 2014, less than a year after being commissioned, after testing positive for cocaine and then his name, address and email were included when the cheating website Ashley Madison suffered a security breach in 2015.

He left his first wife Kathleen — the mother of his three daughters — in 2016 after 22 years of marriage and moved in with Hallie Biden, the widow of his elder brother Beau, who died from brain cancer the previous year.

In the divorce, his wife claimed he had spent ‘extravagantly on his own interests (including drugs, alcohol, prostitutes, strip clubs and gifts for women with whom he has sexual relations), while leaving the family with no funds to pay legitimate bills.’

Biden, an attorney with offices in Washington, D.C., split with Hallie earlier this year and on May 16 he married 32-year-old South African Melissa Cohen, whom he had only known for ten days. She had been living with a boyfriend up until April.

He would have been dating his sister-in-law when Roberts got pregnant in late 2017.