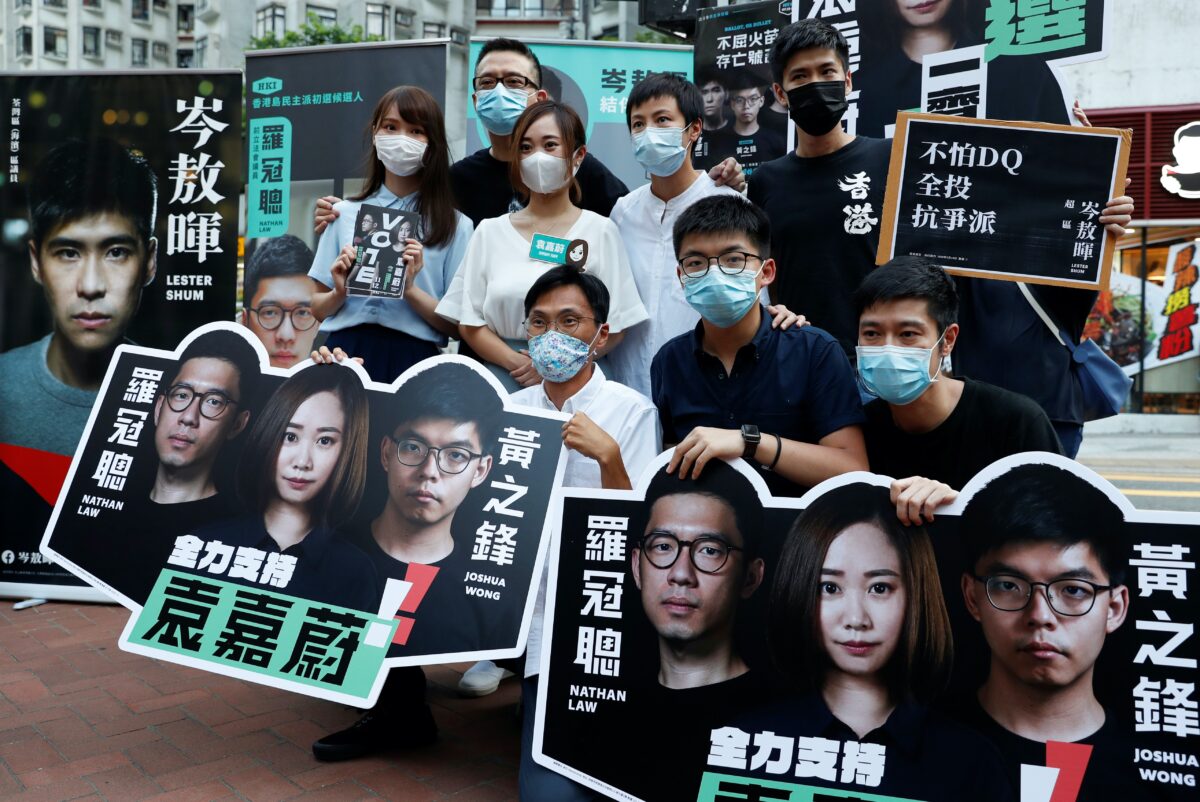 The nominees announced the official disqualifications on their respective Facebook pages, posting letters of notification from the government.

Wong, a 23-year-old Hong Kong activist, had received the largest number of votes in this month’s unofficial election primary, with more than 30,000.

“Clearly, Beijing shows a total disregard for the will of the Hong Kongers, tramples upon the city’s last pillar of vanishing autonomy, and attempts to keep [Hong Kong’s] legislature under its firm grip,” Wong wrote on Twitter, in response to the disqualification.

4. Clealy, #Beijing shows a total disregard for the will of the #Hongkongers, tramples upon the city’s last pillar of vanishing autonomy and attempts to keep #HK’s legislature under its firm grip.

A government spokesperson confirmed that a dozen candidates had been disqualified. An official statement released on July 30 expressed adamant support for “the decision of returning officers [election officials] to invalidate 12 nominees for this year’s Legislative Council General Election.”

The period for nominating candidates ends July 31, leaving the pro-democracy camp with little time to regroup after the elimination of so many candidates.

The Hong Kong government said the rationale for elimination was the candidates’ past behavior that indicated they would be unable to “genuinely uphold the Basic Law,” referring to Hong Kong’s mini-constitution, or “perform the duties of a LegCo (Legislative Council) member.”

Activities that invalidated the candidates include promoting Hong Kong independence, supporting self-determination, soliciting support from foreign governments, and opposition to China’s national security law, according to the statement.

China’s sweeping new law took effect on July 1, immediately after the Chinese Communist Party’s rubber-stamp legislature approved the draft. It punishes secession, subversion of state power, terrorism, and colluding with foreign countries, with a maximum penalty of life in prison.

In 2016, pro-democracy activist Nathan Law was among several lawmakers who were disqualified because they altered their oath of office, which includes a sentence stating allegiance to the Chinese regime’s rule over the city. A court ruled that Law and the others had failed to take their oaths properly.

Moderate pro-democrats, such as lawyer Dennis Kwok, were also eliminated.

“When the national security law was passed, I said ‘one country, two systems’ is finished,” said Kwok during a press conference on July 30, referring to the framework under which Beijing promised to preserve Hong Kong’s autonomy upon the territory’s transfer from British to Chinese rule in 1997. “I think today we’re seeing the result of the relentless oppression that this regime is starting.”

Many candidates have voiced their concerns over the potential for the security law to be used to silence and eliminate pro-democracy proponents in Hong Kong.

After more than half a million Hong Kong residents voted in pro-democracy election primaries earlier this month, U.S. Secretary of State Mike Pompeo expressed the United States’ support. In a statement, Pompeo emphasized that the United States would “be watching developments [of the Hong Kong elections] closely.”

“This is an outrageous political purge of Hong Kong’s democrats,” Patten said. “The national security law is being used to disenfranchise the majority of Hong Kong’s citizens.”

An official statement from the Hong Kong government said it didn’t “rule out the possibility that more nominations would be invalidated.”