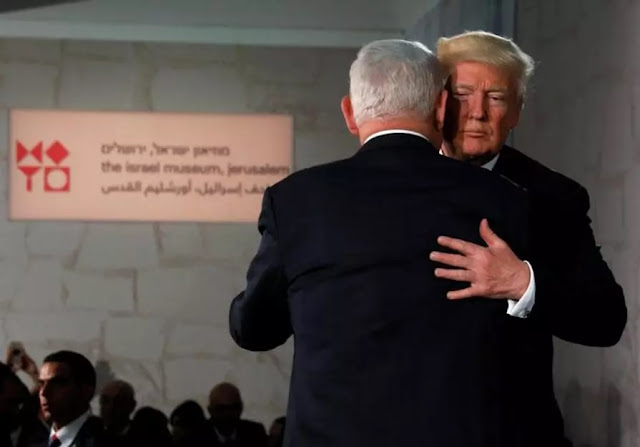 Four things have just fundamentally changed, which means the peace…

For decades every U.S. president in collusion with their European counterparts have attempted to push through a “two-state solution” in the Middle East that would divide the Holy Land between a Jewish west and a Palestinian east. There have been “high marks”, so to speak, particularly the 1993 Oslo Accords during Clinton’s first term, but everything, so far, has been a hit and a miss.

No doubt that all of these unsuccessful attempts have had several things in common:

“The Ultimate Deal”, as Trump calls it, has been perpetually unfeasible, but not just for the four reasons cited above. The bigger reason that outweighs them all is that this deal plays a central role in end time prophecy and without God allowing it to proceed in His permissive will, it will never happen.

Why is this deal so important to Bible prophecy?

I’ll start with the simple fact that God made an everlasting covenant with Abraham, endowing him and his descendants with the Holy Land as an everlasting possession. This means that God’s own Name, honor, and truthfulness are at stake in regards to upholding this covenant promise:

In times past the Jews temporarily lost their land for breaking God’s commandments, but as prophecy frequently stated would happen near the end of the age, God would bring His people back to their ancient homeland (see here and here).

While the world has talked a big game for the past 70 years about creating a “Palestinian State”, the truth of the matter is that only one nation actually came into existence via the 1947 UN Mandate and the subsequent 1948–49 War of Independence and that is the nation of Israel. The Jews, replanted in their reconstituted country after nearly two millennia of exile, not only assumed control of the UN-mandated land, but also expanded north, south, and east after a series of disastrous wars for the surrounding Arab populations. Israel took control of the Golan Heights, much of the West Bank (Judea and Samaria), parts of Gaza, and for a time, all of the Sinai Peninsula.

Since those conquests in justified wars of defense, the world has heavily pressured Israel to cede back land. They gave back Sinai and years later—all of Gaza. And now the world wants to finally complete their desire to divide God’s land by establishing a second country, called Palestine, within the biblically-defined borders of Israel. Doing so would formally sever the Jews from the land God promised to them.

God calls foul on this division in the last days. And this “foul” is what precipitates the onset of the Day of the LORD, which is a judgment on all nations:

I will gather all the nations and bring them down to the Valley of Jehoshaphat. And I will enter into judgment with them there, on behalf of my people and my heritage Israel, because they have scattered them among the nations and have divided up my land.

The earth lies defiled under its inhabitants; for they have transgressed the laws, violated the statutes, broken the everlasting covenant. Therefore a curse devours the earth, and its inhabitants suffer for their guilt; therefore the inhabitants of the earth are scorched, and few men are left.

Talk of a peace deal in the Middle East is a big deal. It’s no laughing matter. In the words of Ian Malcolm, the world carelessly broaches the subject, not realizing they’re dealing with actual divine power. “[They] wield it like a kid that’s found his dad’s gun.”

Well, it now looks like the dinosaurs are soon to be unleashed. And by “dinosaur” I mean a seven-headed dragon who will be cast to earth, causing immeasurable death and destruction in the process—all because the world gives no regard to God and thinks it safe to play with divine fire.

Four things have just fundamentally changed, which means the peace plan is very likely to happen, possibly next year, possibly even this year:

1. Israel is now 70 years old, the bottom limit of a biblical generation (Ps. 90:10), and Jesus said that the Fig Tree Generation would see all things pertaining to His second coming fulfilled. This milestone occurred this year. 2028 might be a theoretical upper boundary on this time frame, but that’s not to the beginning of the Tribulation, but to its end. That means we could be living in literally the last 1–3 years of the present dispensation.

2. The greatest astronomical sign ever predicted in the Bible—a sign that symbolizes the soon rapture of the Church and the Tribulation upon Israel—is now history. It occurred last year. A subsequent, and perhaps final, sign, may have occurred just two weeks ago.

3. The Israeli Knesset managed to finally pass the Jewish State Bill into law (this year), thus completely removing that sticking point off the table.

4. The Trump Administration, under the direction of Trump’s son-in-law Jared Kushner, is on the verge of unveiling a peace plan in the next few months with a fundamentally different approach and they seem to have the backing of several Arab countries (Saudi Arabia, Egypt, Jordan) who in years past would be completely averse.

The reason this plan seems likely to be “the one” is because the Israelis may be dividing the land themselves, even without Palestinian agreement. News articles are popping up right and left, which indicate that Israeli officials feel like this is their one and only golden opportunity. In other words, because they presently have the military upper hand, and a seemingly-favorable American president in the White House willing to present an agreement that doesn’t require Palestinian support, they can simply divide the land how they see best and arbitrarily create a “Palestinian State”. They see this as an immediate necessity in order to finally make “peace” with their blood-thirsty Arab neighbors and to prevent a demographic disaster in the form of a single-state with a majority Arab population.

The stars are aligned and it seems to be the time.

At the end of last month the President said the plan will be unveiled within four months, which would mean before the end of January 2019. And today it was reported that President Trump has told Emmanuel Macron that he is ready to pressure Prime Minister Netanyahu to ensure the deal happens.

There’s no precise timeline or timing predictions to be made, but I think it is very likely that the plan you’ll soon see unveiled could be what many of these signs have been pointing to.

Addendum: I’ve received some questions about this peace plan, with people curious to know if I think it is the 7-year covenant mentioned in Daniel 9:27. Short answer: no. Longer answer: it could be the basis for it. Daniel 9:27 does not say that a 7-year covenant is confirmed by the antichrist. It says that a covenant is strengthened. According to Scripture, the antichrist is not revealed until the Church is taken out of the way (2 Th. 2:3, 7), thus I believe we will be gone before the deal is “strengthened” for a period of seven years.

This peace plan could very well be the basis for the post-rapture 7-year deal, though. What I do think this deal could be is the catalyst for the Tribulation and God’s judgment upon the nations.

Published in Political News, Trump, US News and World News