‘He died like a dog’ Donald Trump addresses the nation and confirms that ‘coward’ ISIS leader Abu Bakr al-Baghdadi has been killed by U.S. Special Forces and died ‘whimpering and crying and screaming’ after being cornered inside his Syrian lair and detonated his suicide vest 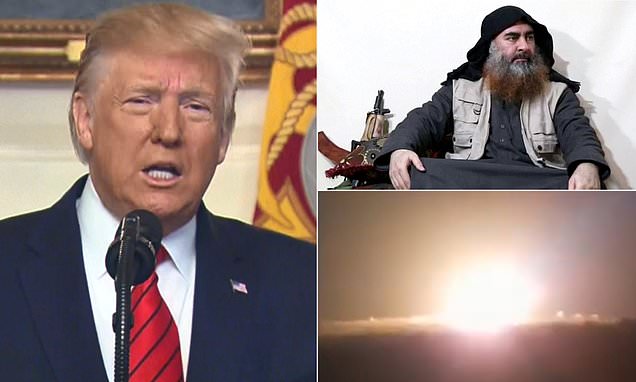 Donald Trump announced Sunday morning that ISIS leader Abu Bakr al-Baghdadi ‘died like a dog’ as the result of a U.S. Special Ops forces raid on his hideout in northwest Syria.

‘Last night the United State brought the world’s number one terrorist leader to justice. Abu Bakr al-Baghdadi is dead,’ Trump said from the Diplomatic Reception Room, where just a week earlier he announced a ceasefire between Turkey and the Kurds.

‘He was the founder and leader of ISIS, the most ruthless and violent terror organization anywhere in the world,’ he continued as he described the events of the raid.

Al-Baghdadi, the president confirmed, detonated his suicide vest, killing himself and three children, during an overnight targeted attack in Syria’s Idlib province.

The president touted the operation and al-Baghdadi’s death as ‘bigger than bin Laden.’ Osama bin Laden, founder of Al-Qaeda and the terrorist leader behind the September 11 terrorist attacks, was killed in 2011 during a Navy SEALs operation during Barack Obama’s presidency.

‘This is the biggest there is. This is the worst ever. Osama bin Laden was big, but Osama bin Laden became big with the World Trade Center. This is a man who built a whole, as he would like to call it, a country,’ Trump said, referencing al-Baghdadi’s creation of the Islamic State.