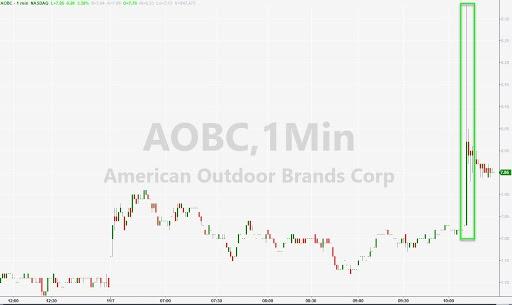 Gun stocks are zooming higher in late session Thursday after the Trump administration passed a crucial milestone in a long-delayed rule change that would make it easier for gun companies to export firearms around the world, sources told Reuters.

Sources said the rule change would shift oversight of firearm exports from the U.S. Department of State to the Department of Commerce. The timing of this change could occur as early as next month.

The National Sports Shooting Foundation concluded in an earlier report that American Outdoor Brands and Sturm Ruger & Company could see foreign gun sales surge by as much as 20% upon the rule change. Both companies would likely export assault rifles and ammunition.

American Outdoor Brands soared as much as 4% on the news.