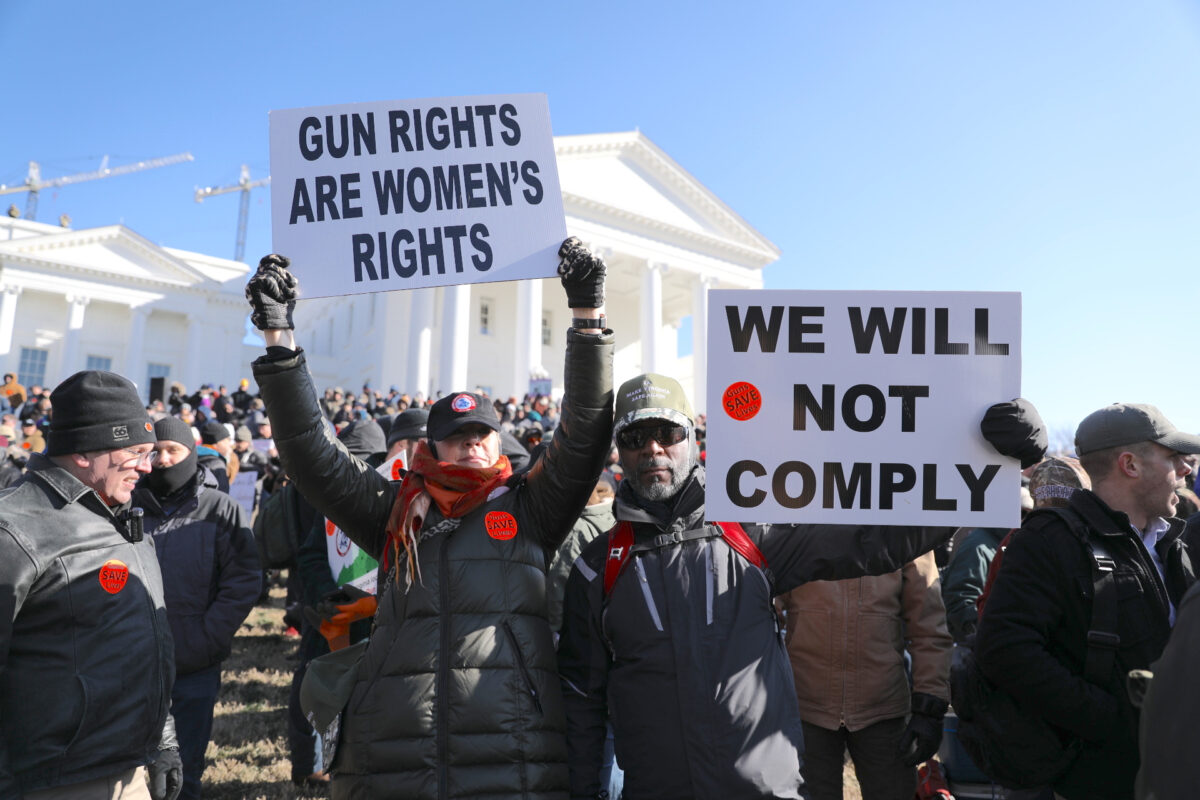 The Democrat-controlled legislature of Virginia has seen a flurry of contentious legislation this season, some…

The Democrat-controlled legislature of Virginia has seen a flurry of contentious legislation this season, some of which sparked outrage among Republicans. The bills focused most prominently on curbing the right to possess firearms. Still, many pertain to other areas, such as abortion, voter ID requirements, electoral college, and giving felons the right to vote.

There are signs that many of the bills won’t make it through the legislature. One of the reasons is that the state’s legislative calendar is set up in a way that both the House of Delegates and Senate only have until Feb. 11 to act on their legislation.

Still, the Democrat majorities in both chambers have already shown a willingness to pick up and pass some of the bills.

More than sixty bills regarding guns, many focused on limiting the right to bear them, were introduced in Virginia this year. The most prominent one was Senate Bill No. 16. It would have banned the possession of most semi-automatic rifles that accept a detachable magazine or hold over 10 rounds and also some semi-automatic handguns and shotguns. That would have turned a large share of the state’s estimated two million gun owners into criminals since nearly two-thirds of gun owners own a rifle, and the types of rifles covered by the bill are the most popular ones, according to industry estimates.

The bill prompted outrage across the state and beyond. Nearly every county in the state has declared itself a “Second Amendment Sanctuary,” vowing to boycott enforcement of such a law.

On Jan. 13, SB 16 died in the Senate by a unanimous vote of nine Democrats on the chamber’s Judiciary Committee.

Another similar bill, HB 961, has lain in the House’s Public Safety Committee since Jan. 7. It covers the same weapons but would allow current owners to keep them under certain circumstances, such as if they keep them on their property or only take them for hunting or to a gun range and back.

Some other bills, however, have a much better chance. SB 69 limits common handgun purchases to one a month while SB 35 allows local authorities to ban possession of firearms or ammunition in public spaces used for or adjacent to events that require a permit to be held. Both passed the Senate on Jan. 16 along partisan lines (21-19).

On Jan. 22, the Senate Democrats also passed SB 240, which would allow law enforcement to ask state judges for an order and ultimately a search warrant to take guns from anybody who “poses a substantial risk of personal injury to himself or others in the near future by such person’s possession or acquisition of a firearm.”

When determining who poses such a “risk,” the judges should look “any relevant evidence,” including “recent … threats,” the targeted person had made that put one “in reasonable apprehension of … bodily injury.” The level of necessary evidence would be the same as for a search warrant—enough for a ”probable cause.”

The person would get a court hearing within 14 days where the government would need to prove “by clear and convincing evidence” that the order should be extended for a maximum of 180 days.

At least two bills focus on relaxing abortion rules in the state. SB 733 would remove requirements that a woman is provided various information shortly before getting an abortion, including ultrasound and “the possible detrimental psychological effects of abortion.” At least some women are dissuaded from abortion by seeing their unborn on an ultrasound. The bill passed in the Education and Health Committee along partisan lines on Jan. 23.

SB 635 says that a pregnant woman “has a fundamental right to … terminate a pregnancy,” and the state shall not “deny or interfere with,” such a right. The bill has 19 patrons in the Senate, all Democrats. It’s been in the Education and Health Committee since Jan. 7.

The state’s Democratic Governor Ralph Northam caused a furor a year ago when he suggested that a mother should have the option to have her child killed even after birth in cases when the baby has “severe fetal abnormalities” or is deemed “nonviable.”

SB 399 gives all Virginia’s electoral votes to the winner of the national presidential popular vote.

The law only goes into effect when states cumulatively possessing a majority of the electoral votes have passed such legislation as part of an agreement called the National Popular Vote Compact.

The compact still needs 74 more electoral votes to go into effect, according to its website. Virginia would add 13.

The bill has been in the Privileges and Elections Committee since Jan. 7.

SB 65 would remove the requirement that Virginians show photo identification to be allowed to vote. Under the new law, “a current utility bill” would suffice to prove one’s name and address.

The bill has been in the Privileges and Elections Committee since Nov. 21.

Virginia Constitution bars felony convicts from voting unless their rights are restored by the Governor “or other appropriate authority.” It also bars from voting those adjudicated to be mentally incompetent until their competencies are restored.

SJ 8 would amend the state’s constitution to remove such requirements, thus restoring voting rights to both groups and de facto allowing felons to vote from prison.

Most states allow felons to vote, but usually after they complete their sentences, including parole or probation. Only two states, Maine and Vermont, allow felons to vote during incarceration, according to the National Conference of State Legislatures.

Virginia used to have some of the strictest re-enfranchisement criteria until 2014, when then-Governor Terry McAuliffe, a Democrat, issued an executive order restoring voting rights to all the state’s convicted felons who had completed their sentences including parole or probation—more than 200,000 people. Virginia Supreme Court struck down the move, saying the Governor has to restore the rights for people individually. McAuliffe has been doing so until he finished his term. The effort continues under his successor Northam.

The legislature seems to have passed on the bill for the time being as the Privileges and Elections Committee unanimously continued it into 2021 on Jan. 21.

VIEW THE ARTICLE
The Epoch Times.com

Published in Gun Control and US News