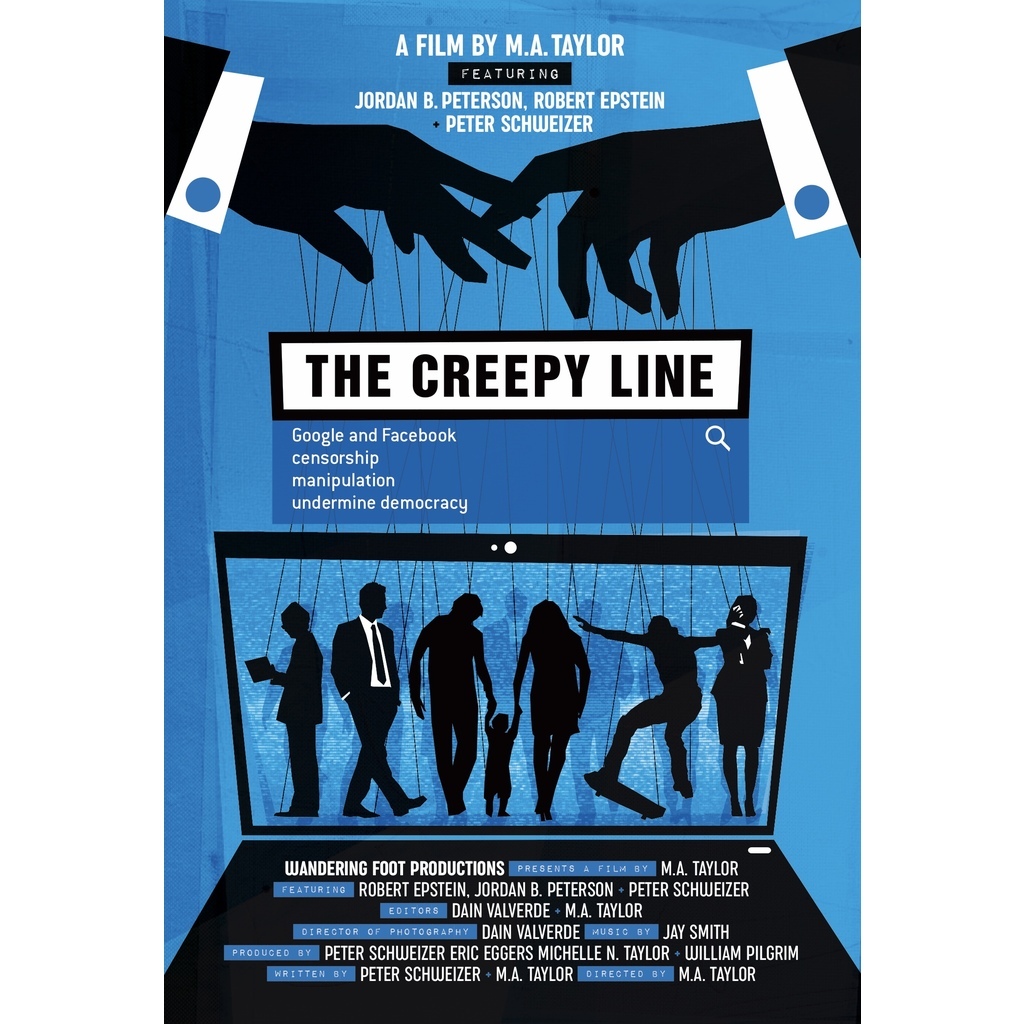 The Creepy Line is a particularly sinister term used in an unguarded remark by former Google CEO Eric Schmidt in 2010. In hindsight, what is most disturbing about the comment is how casually he explained Google’s policy regarding invading the privacy of its customers and clients.

“Google policy on a lot of these things,” Schmidt says about 45 seconds into the introduction, “is to get right up to the creepy line and not cross it.” Time pointer needed.

The Creepy Line is an 80-minute documentary available through several options available at the link below.  For now, it is available for free at Amazon Prime, but I’m not sure how long it will be offered there considering many current concerns regarding censorship of anti-establishment themes on various social media platforms.  This film offers a very frank look at the number one source of news in our country: Facebook and Google.

Early in the film, you will discover how Google acquired an enormous and permanent cache of data about users. Initially, the data was used to refine search algorithms used to help index the websites and information uploaded to the world wide web. Now, however, it is used to fine-tune ads and content that most suits your interests, storing the information to better provide content suggestions for you. But, this film will give you a really disquieting idea (at least it should) about what else they may be doing with that data.

Initially, Google was simply the most popular Search engine, basically the largest available “indexing” algorithm on the net. Then, Google came up with Google Chrome, a browser, to track and log not only what you look for but also where you go and every keystroke you make while there. In fact, Google realized they could serve you best if they know what you are doing even when offline, which is why the the Android system can track you everywhere you take your phone. With all the free apps available and used globally, Google has a very accurate picture of what everyone’s daily life looks like anywhere in the world.

At intervals during the presentation, Professor Jordan Peterson offers insight from his own experience with social media and agenda setting.  For those unfamiliar with Peterson, he was propelled into fame when he very publicly refused to use the new gender pronouns approved by Canada’s Political Correct Policy. Peterson’s outspoken refusal to yield to the thought police led to him being interviewed as being a spokesman for the Millennial Mindset, especially their willingness to accept new technology without questioning it.

“These are all free services but obviously they’re not,” notes Peterson, during his commentary, as he discusses the impact upon his life his sudden notoriety and the negative publicity Google and You Tube caused for him. He discusses his own battle with depression as well as insights into his daughter’s experiences with social media, which gives him special psychiatric insight into teenage (millennial) angst, perhaps.  Some may find his frank openness about the issues off-putting, but he comes across to me as a man who has walked through hell and doesn’t want to talk about it, but has decided he will do so, if you are interested. I find Peterson’s point of view extremely relevant, especially in light of the the news regarding Peak Prosperity’s de-platforming today and the implications for our own sources of information going forward.

He is not the main speaker during the film, but Peterson does an excellent job explaining how the surveillance business model works.  This leads to a discussion of how Google Maps, Google Docs, and the use of Gmail (even drafts of emails you don’t send!) combine together to form and shape your thoughts and behavior, similar to a bunch of people in a control room with dials which monitor and control your every interaction with the world. (15:28)

Less than ten minutes into the movie, you might have already decided to turn to non-Google search engines, but there is no hope of your retrieving any information they already have on you. It belongs to them, a legal point discussed several times during the presentation.

We already know Facebook censors conservative views and downplays trending stories favorable to conservatives, and the movie assures us Google and You Tube work on similar algorithms. Algorithmic choices must be based on something, but to remain supposedly objective, nothing should be completely filtered out, only put into some sort of rational order. Rational could be chronological, or most viewed, or relevant, for instance, but for that rational variable in the algorithm, something will come first.

As long as nothing is excluded, albeit, as long as you can find them on the list somewhere, there is at least a rational reason for their placement and the semblance of objectivity is retained.  Whether you agree with the rationality is not relevant at this point.  Except, that we know filters are restricting information for very irrational reasons.