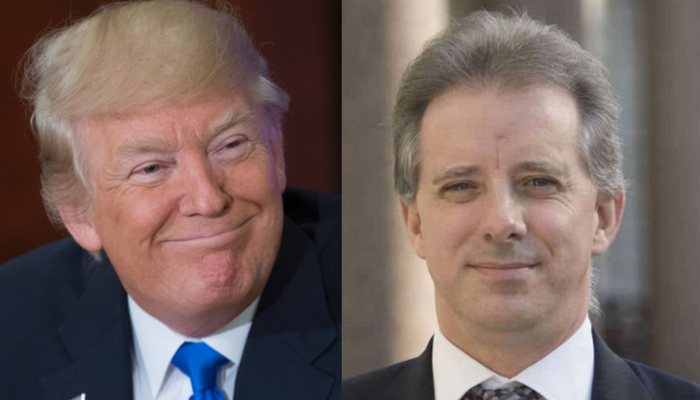 One of the founders of Fusion GPS said Sunday that…

The Political Insider
By Daily Caller

One of the founders of Fusion GPS said Sunday that he would “like to know more” about some of the allegations made in the infamous Steele dossier, which the opposition research firm began working on over three years ago.

“We also talk in the book very candidly about, you know, let’s be honest … there are certain things we wonder about. We’d like to know more,” Glenn Simpson, a Fusion GPS co-founder, said in an interview on “Meet the Press.”

The book he is referring to is “Crime in Progress,” which details Fusion GPS’s work with former British spy Christopher Steele on the anti-Trump dossier.

Simpson wrote the book with his Fusion GPS co-founder Peter Fritsch. It comes out Tuesday.

Simpson and Fritsch defend the dossier in the book, even though many of its most explosive allegations have either been debunked or remain unverified.

The special counsel’s report undercut the dossier’s core claim that the Trump campaign was involved in a “well-developed conspiracy of cooperation” with the Kremlin to influence the 2016 election. The report also suggested Steele’s allegation that Michael Cohen visited Prague in August 2016 to meet with Kremlin operatives is also false.

Steele’s most salacious allegation — that Russia has a blackmail video tape of Donald Trump — remains unverified, but heavily disputed.

While Simpson and Fritsch defend the dossier in their book and in recent interviews, they dodged questions about specific claims during their “Meet the Press” interview.

When Todd asked Fritsch about several allegations that remain unproven, the Fusion executive changed the topic to Steele’s past work as an MI6 officer.

“First, it’s important to understand who Christopher Steele is. He’s a former British intelligence officer who rose to run MI6’s Russia desk. This is one of the most capable and one of the most knowledgeable experts on Russia in the world today, and he spent a lot of time going through the dossier to sort out information from disinformation, credible facts from non-credible facts,” Fritsch said.

Simpson and Fritsch also revealed that they continue to work for The Democracy Integrity Project, a non-profit group founded by Daniel Jones, a former staffer for Dianne Feinstein when she served as chair of the Senate Intelligence Committee.

Jones told the FBI in March 2017 that he was working with Fusion GPS and Steele to collect and disseminate information to the media, lawmakers, and law enforcement authorities.

The Daily Caller News Foundation obtained TDIP’s tax filings that showed the group paid Fusion GPS over $3.3 million in 2017 for research. TDIP paid Steele over $250,000, according to the filings.

Jones told the FBI a consortium of between seven and 10 wealthy donors were funding TDIP. A spokesman for George Soros confirmed the progressive billionaire donated at least $1 million to the group.

Simpson and Fritsch revealed in their book that they turned to a small group of donors in 2017 to help pay for multiple lawsuits they faced over the dossier.

Published in Interviews and Political News