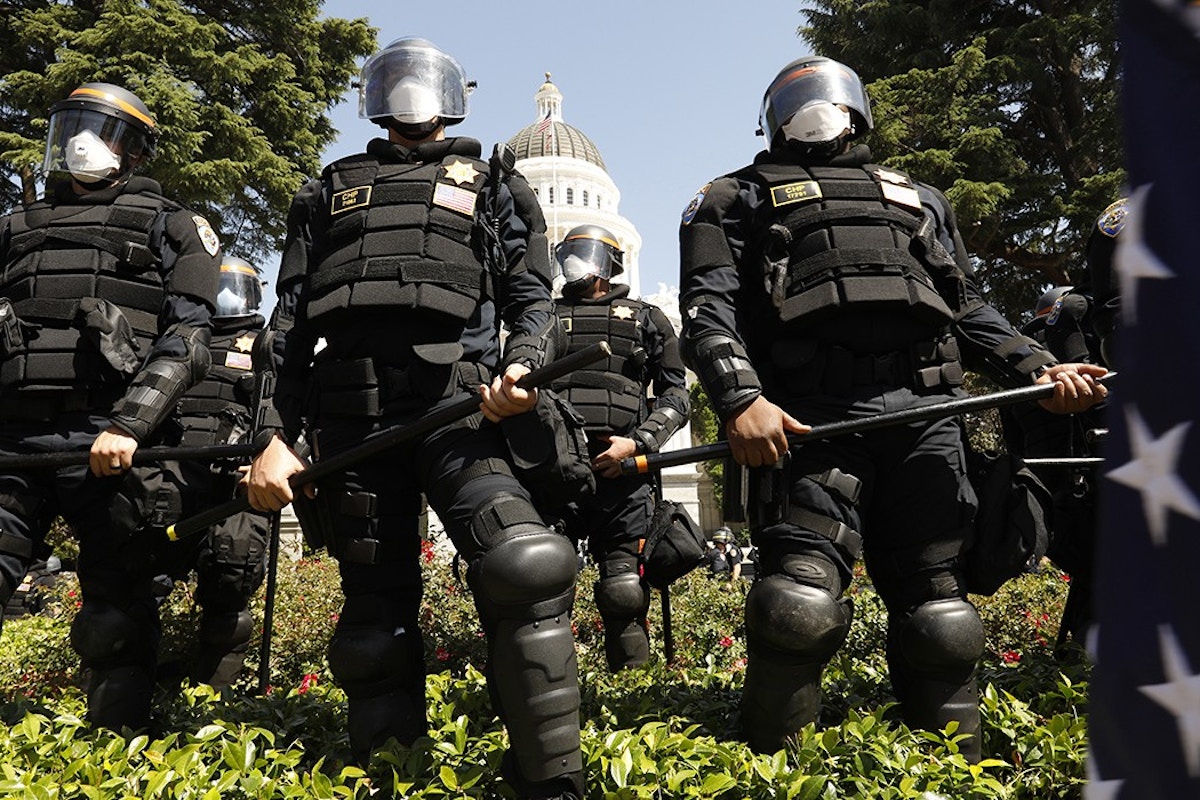 The orders are for disposable cuffs, gas masks, ballistic helmets,…

THE FEDERAL government has ramped up security and police-related spending in response to the coronavirus pandemic, including issuing contracts for riot gear, disclosures show.

The purchase orders include requests for disposable cuffs, gas masks, ballistic helmets, and riot gloves, along with law enforcement protective equipment for federal police assigned to protect Veterans Affairs facilities. The orders were expedited under a special authorization “in response to Covid-19 outbreak.”

Redcon Solutions Group, a private security company founded by Iraq War veterans, has won over $1.6 million in contracts to provide guards for “Covid-19 screening security guard services.” Similar contracts have gone out to private security firms to guard VA facilities in San Francisco, Des Moines, and Fayetteville, among others.

The increased security contracts appeared shortly after a recent Inspector General report noted an increase in absenteeism among VA employees and shortages among VA police. The IG report noted that there is “additional strain caused by the need for additional police presence for COVID-19-related screenings” of veterans at all VA health facilities and recommended the hiring of contract security services.

The VA police, as The Intercept previously reported, was not armed until 2011, when the Pentagon began providing military equipment to police forces around the country.

“Between 2005 and 2014, VA police departments acquired millions of dollars’ worth of body armor, chemical agents, night vision equipment, and other weapons and tactical gear,” The Intercept reported last year. But an Inspector General report in December 2018 found there was little oversight. “The OIG found that forces at roughly three out of every four facilities were not receiving timely inspections. Further, the sparse data collected on police activities was not tracked or assessed in any systematic or rigorous way.”

The CARES Act, the $2.2 trillion stimulus legislation passed in late March, also authorized $850 million for the Coronavirus Emergency Supplemental Funding program, a federal grant program to prepare law enforcement, correctional officers, and police for the crisis. The funds have been dispensed to local governments to pay for overtime costs, purchase protective supplies, and defray expenses related to emergency policing.

The CESF funding may be used for a range of coronavirus response efforts by law enforcement, including medical personal protective equipment, overtime for police officers, training, and supplies for detention centers. The grants may also be used for the purchase of unmanned aerial aircraft and video security cameras for law enforcement. Motorola Solutions, a major supplier of police technology, has encouraged local governments to use the new money to buy a range of command center software and video analytics systems.