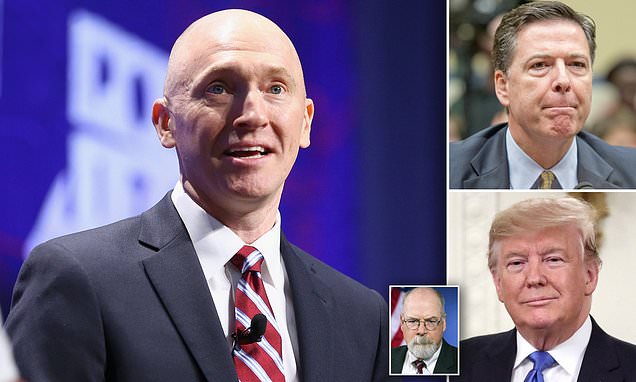 The alleged document tampering was uncovered during Inspector General Michael…

A criminal investigation has been opened into an FBI official suspected of ‘altering’ a document in the warrant application to surveil Trump campaign advisor Carter Page during the 2016 election, according to a new report.

The alleged document tampering was uncovered during Inspector General Michael Horowitz’s probe into the origins of the Trump-Russia investigation, and subsequently referred to U.S. Attorney John Durham for criminal investigation, CNN reported on Thursday.

In October 2016, the FBI sought and was granted a FISA warrant to surveil Page’s communications and access all of his stored emails and texts.

To obtain the warrant, the FBI had to convince a judge in a secret court that there was probable cause that Page was a foreign agent. The 90-day warrant was renewed three times, but Page has never been charged with any crime.

It’s unclear which FBI official is under criminal investigation for allegedly tampering with documents in the warrant application.

The names of the supervisory special agent or agents who submitted sworn statements to support the FISA application and renewals were redacted when the applications were publicly released.

Former FBI director James Comey signed off on the FBI evidence in the applications prior to being fired by President Donald Trump in May 2017.

The alleged FBI document tampering is expected to be addressed in Horowitz’s IG report, which is undergoing final classification review.

In a letter sent on Thursday to Senate Judiciary Committee Chairman Lindsey Graham, Horowitz said he expected his office to be able to release the report on December 9 ‘barring unforeseen circumstances.’

Published in Crime, FISA, Political News, Trump and US News