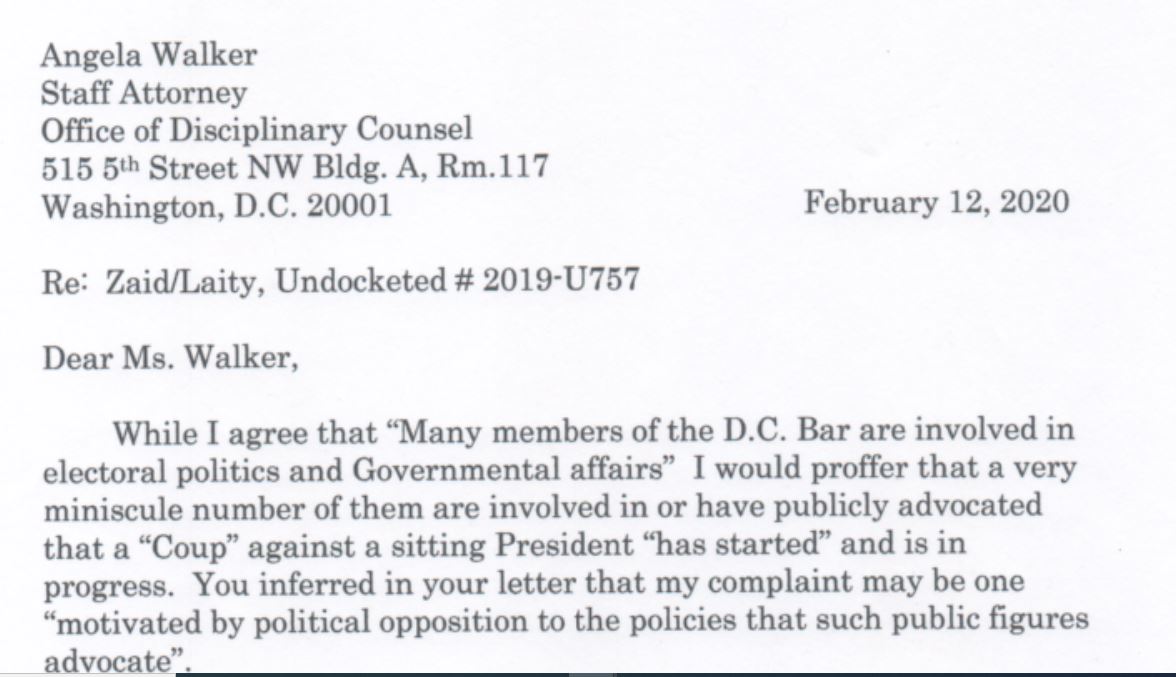 “A COMPLAINT MIGHT BE MOTIVATED BY POLITICAL OPPOSITION” by Sharon…

(Feb. 12, 2020) — In November 2019, New York State citizen and “associate member” of the American Bar Association (ABA) Robert Laity filed respective complaints with the ABA in Chicago and the Office of Disciplinary Counsel (ODC) in Washington, DC alleging “misconduct” on the part of Atty. Mark Zaid, one of three attorneys representing the Intelligence Community “whistleblower” whose August 12 complaint set off the impeachment of President Donald Trump.

The whistleblower complaint alleged that Trump had abused the power of his office in a July 25, 2019 telephone call with Ukrainian President Volodymyr Zelenskiy, an accusation both national leaders denied.

Trump was acquitted on both charges last Wednesday by the U.S. Senate, which heard testimony from House Impeachment Managers and Trump’s defense counsel for more than two weeks.

Ten days after Trump’s inauguration, Zaid tweeted that a “coup has started. First of many steps” and “impeachment will follow ultimately,” which Laity cited in his complaints to the ODC and ABA.

Since Trump’s acquittal, several Republican members of Congress have alleged improprieties on the part of the whistleblower, with Senate Judiciary Committee Chairman pledging to call him or her to testify in the near future.  Ranking member of the House Intelligence Committee Devin Nunes has given Intelligence Community Inspector General Michael Atkinson until Friday to produce documentation pursuant to several previous requests regarding the whistleblower complaint and rules governing such complaints which may have been altered at a key time in the process.

An initial response from the ODC dated December 30, 2019 informed Laity that “a review” of his complaint would take place over the next 45 days and that he would receive a follow-up communication “after our preliminary inquiry.”

Laity shared with The Post & Email a letter dated February 6, 2020 from the Angela Walker, Staff Attorney at the ODC stating, in part, that “Many members of the D.C. Bar are involved in electoral politics and governmental affairs. From time to time, this Office receives complaints about these public figures. We are sensitive to the possibility that a complaint might be motivated by political opposition to the policies that such public figures advocate or carry out and that our investigation might interfere in the political or governmental process.”

The letter concluded by stating that the Office would not be opening “a full investigation” into Zaid’s conduct based on Laity’s complaint. 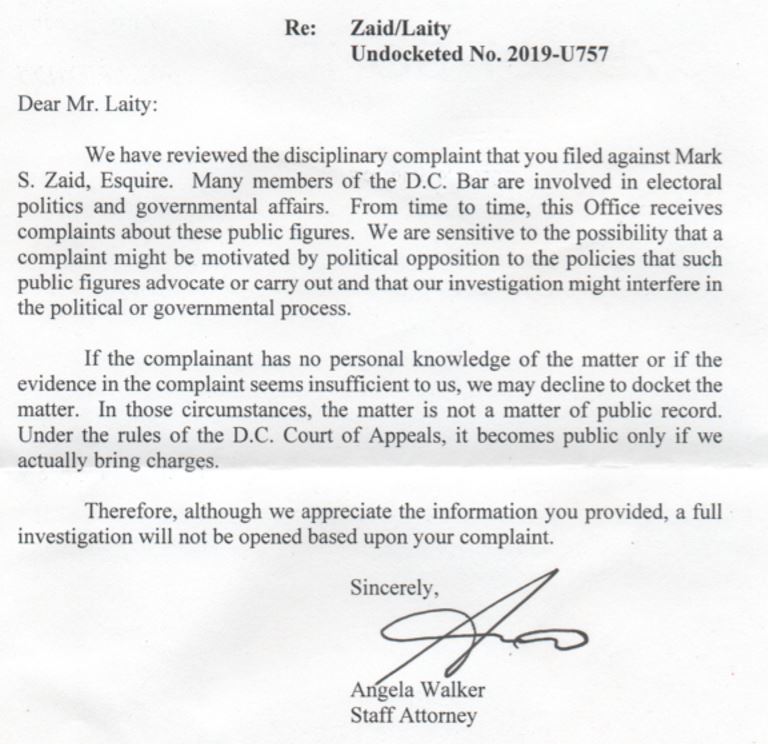 On Wednesday morning, Laity responded to Walker, “While I agree that ‘Many members of the D.C. Bar are involved in electoral politics and Governmental affairs’ I would proffer that a very miniscule number of them are involved in or have publicly advocated that a ‘Coup’ against a sitting President ‘has started’ and is in progress.  You inferred in your letter that my complaint may be one ‘motivated by political opposition to the policies that such figures advocate.’  It goes without saying that any reasonable person who claims to be ethical would be opposed to such activity by a member of the Bar. Indeed, advocating a ‘Coup’ against the Government is Sedition and advocating the overthrow of the lawful government.” (Emphasis Laity’s) 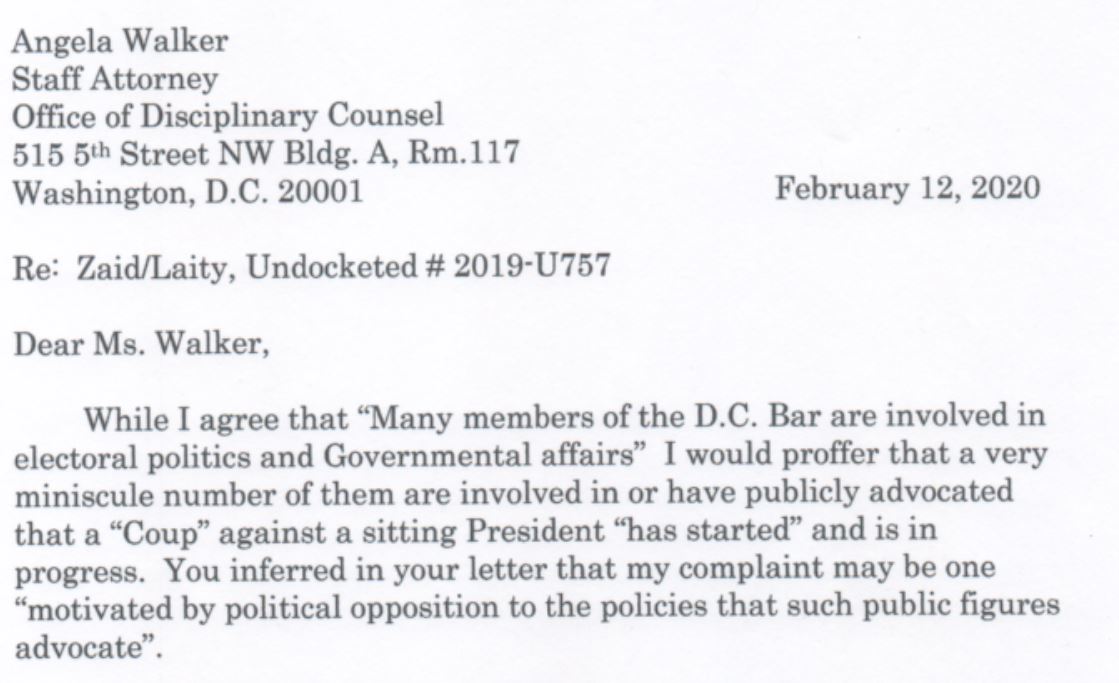 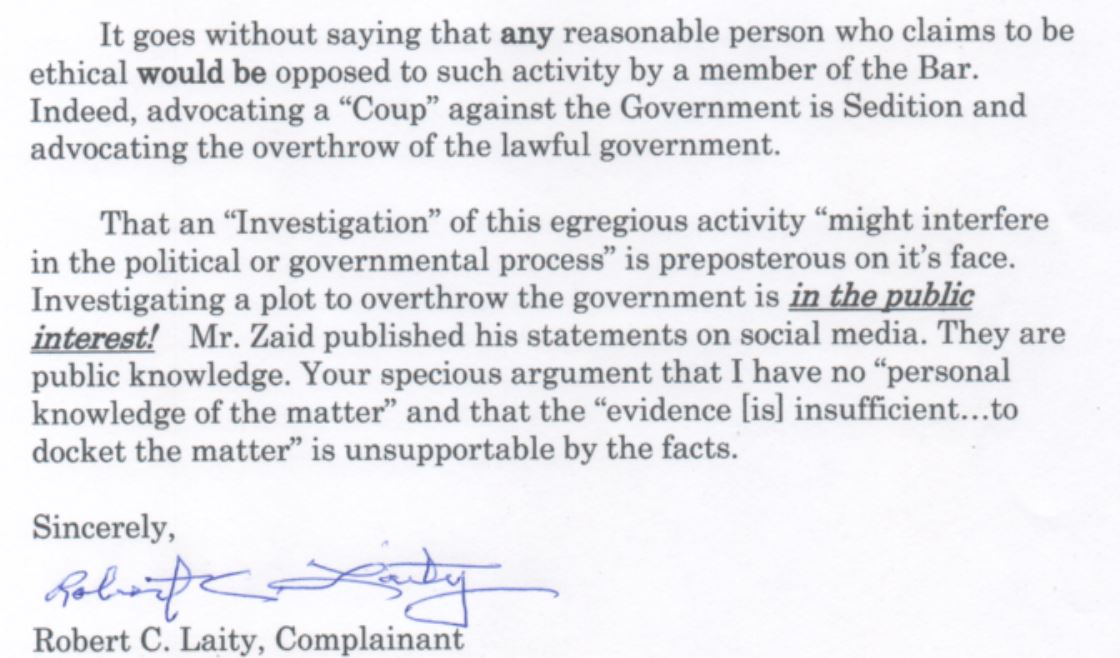