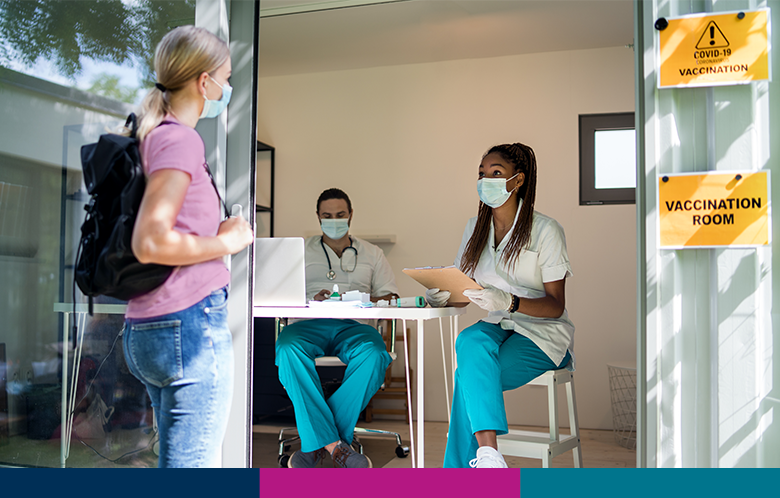 Adenovirus-vectored Vaccines for COVID-19 – How Do They Work? | Health-Notes

With millions of people around the world vaccinated with an adenovirus-vectored vaccine for COVID-19, here’s…

Viruses are genetic material surrounded by a protein shell with the ability to infect cells, highjack cellular machinery, and make copies of themselves. Viruses are also detected by the immune system and stimulate innate and adaptive immune responses and quite often, potent immunological memory that protects the host from reinfection. Therefore, researchers have been using viruses as vectors or carriers of vaccine antigens in order to protect against infectious diseases.

Adenoviruses are nonenveloped DNA viruses with a range of properties making them suitable vaccine vectors. Adenoviruses infect a wide range of cell types, they are easy to genetically modify, and in nature are known to cause mild or asymptomatic respiratory infection (thus, they are relatively safe). Further, gene swapping (replacing an essential adenovirus gene required for replication with the vaccine gene) renders the vectors replication incompetent, further contributing to safety. Many adenovirus-vectored vaccines target viral diseases because the adenovirus mimics a potent antiviral immune response, and its use as a SARS-CoV-2 vaccine is no exception. 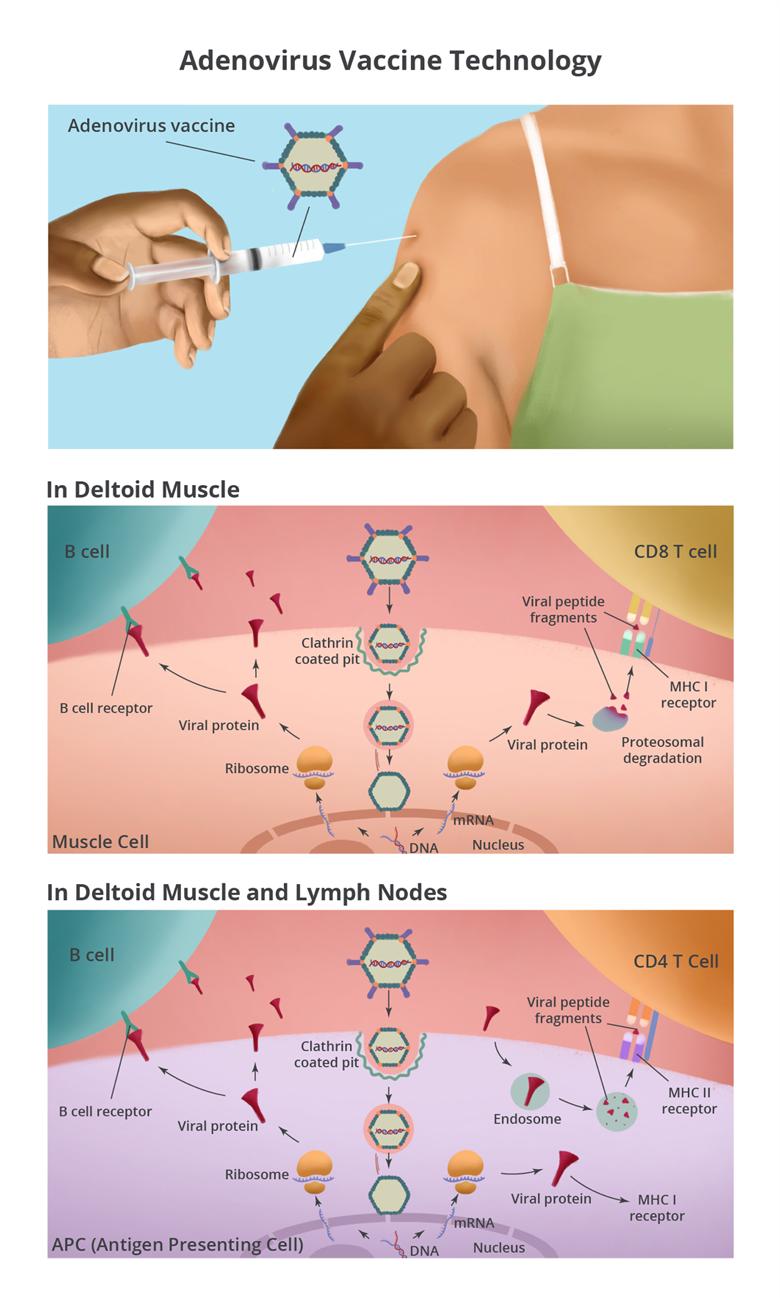 Adenovirus-vectored vaccines are injected intramuscularly into the deltoid muscle where they infect muscle cells via clathrin-mediated endocytosis. The virions escape from endosomes and are transported to the nuclear membrane by microtubules. After docking on a nuclear pore complex, adenoviral DNA is released into the nucleus where the SARS-CoV-2 spike gene is transcribed into messenger RNA (mRNA). The mRNA is transported to the cytoplasm to be translated by ribosomes, making SARS-CoV-2 spike protein. Muscle cells around the injection site make lots of spike protein, which can be detected by immune cells in the tissue.

The injection site is a puncture wound and a bolus of fluid has been injected into the tissue. Together, these cause cellular stress that alerts the immune system of a possible issue. Additionally, adenovirus stimulates an inflammatory reaction that kicks off the immune response. This inflammatory and stress response attracts immune cells into the muscle, which can lead to pain, swelling, and redness of the arm at the injection site.

Antigen presenting cells (APCs) are one type of immune cell that gets attracted to the site. The adenovirus-vectored vaccine can infect APCs and make spike protein (the same way it does in the muscle cells) and stimulate B cells and CD8 T cells. APCs also play another pivotal role in initiating the immune response by picking up extracellular proteins, dead cells, and debris at the injection site. They break down the proteins, including the spike protein, and present peptide fragments to CD4 T cells. Furthermore, APCs are not static. They take antigens from the injection site to the local draining lymph nodes where they have a greater chance of encountering B cells, CD4 T cells, and CD8 T cells with receptors that can recognize the spike protein.

When antigen-specific lymphocytes are activated, they undergo proliferation and differentiation from naïve cells to effector cells. The primary function of effector B cells is to make antibodies, which come in different varieties and perform distinct tasks. An important function of antibodies generated after vaccination is neutralization (binding up the virus and blocking it from infecting cells). Effector CD4 T cells are capable of a wide range of functions, from helping B cells make the most targeted antibodies to quelling the immune response. Effector CD8 T cells are often known as cytotoxic T cells because they survey the body and eliminate infected cells. Sometimes all this immune activity can cause systemic symptoms such as fever, fatigue, and muscle aches. This is a normal response known as reactogenicity after vaccination and is more common after the second dose of vaccine.

The most important consequence of vaccination is that some effector cells persist and retain memory of the SARS-CoV-2 spike protein (these cells are called memory B cells and memory T cells). If a vaccinated person is infected with SARS-CoV-2, circulating antibodies can bind up the virus, and the memory B and T cells initiate a rapid and strong response to clear the virus. For the adenovirus vaccines, this response can prevent symptoms in about two-thirds of people and prevent severe COVID-19 and death in nearly everyone.

Now that hundreds of millions of people have been vaccinated worldwide, it appears that adenovirus-vectored vaccines to COVID-19 are both safe and effective and will be a key weapon in the arsenal to end this pandemic. However, since infection from some SARS-CoV-2 variants may not be as effectively prevented, we still have a lot to learn.