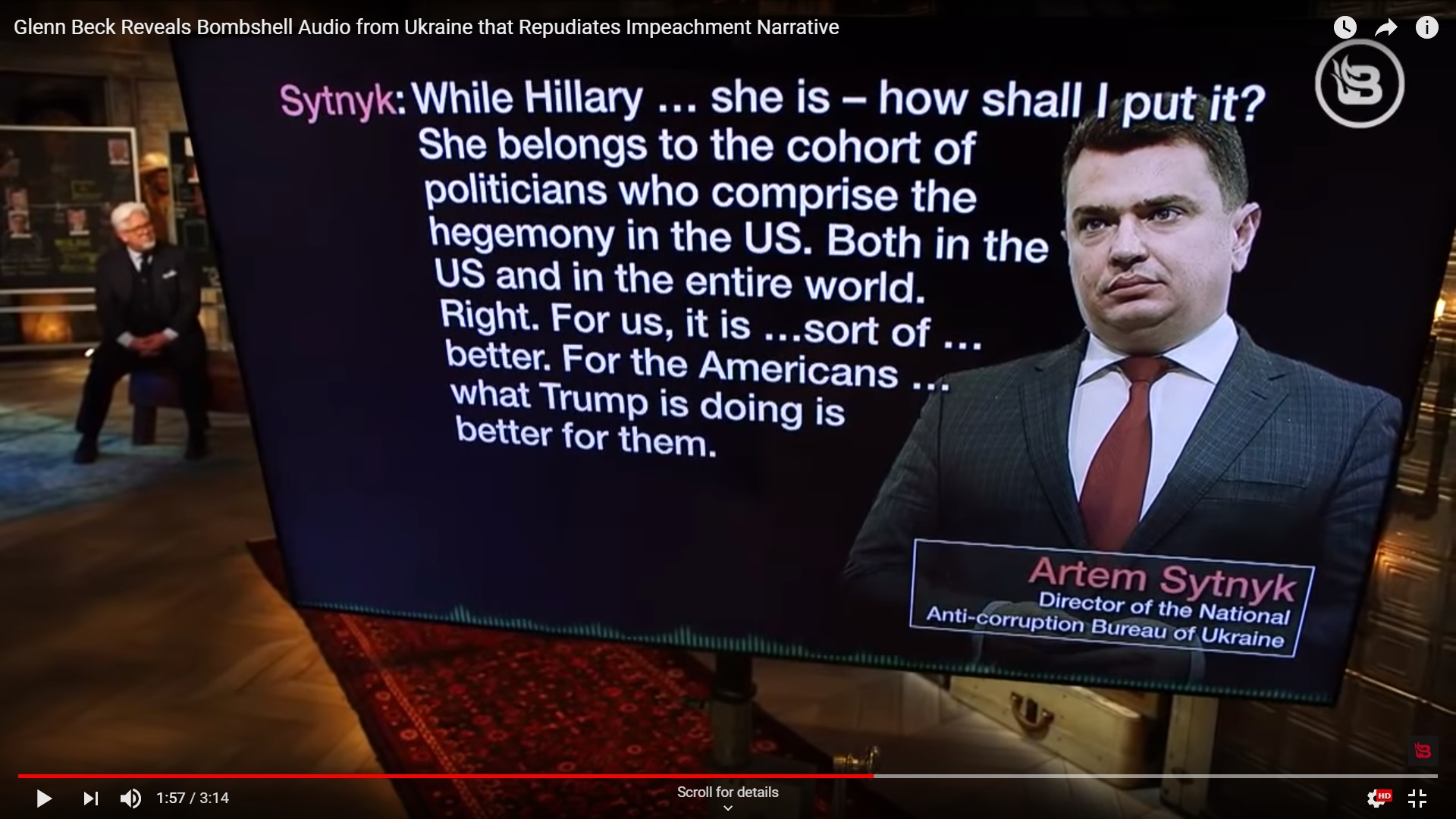 So, to summarize, Sytnyk, the Director of Ukraine's Anti-corruption Bureau,…

Glenn Beck has discovered an audiotape of the Director of the National Anti-corruption Bureau of Ukraine (of all positions) admitting that he tampered with the 2016 US presidential election  to help Hillary Clinton.

Sytnyk is someone who AG Barr and the Republicans in the Senate should be very interested in talking to, as well as the Ukrainian president and his investigators who are trying to end the cycle of corruption that has made Ukraine a laughing stock for years.

Partial transcript of the translated audio….

Kolya: Did they, those Russians, help Trump? Your people?

Sytnyk: I think they did. Yeah. I helped him, too. Not him, but Hillary. I helped her.

Sytnyk: Well, this is how they write about it, right.

Kolya: Well, I’m about … the commentaries. At the time, we were not [indiscernible.]

Sytnyk: Trump … his purely inner problem … issue … they dominate over the external matters. While Hillary, she is — how shall I put it? She belongs to the cohort of politicians who comprise the hegemony in the US. Both in the US and the entire world, right? For us, it’s … sort of … better. For Americans … what Trump is doing is better for them.

Kolya: Well, we have lots of those American experts here now … [indiscernible.]

Sytnyk: Well, there, you see why Hillary lost the elections? I was in charge of the investigation of their “black accounting” records. We made the Manafort’s data available to general public.

Sytnyk: He was imprisoned. Manafort then was the head of the Supreme Headquarter of Trump, right? Then he was dismissed, too, including due to the “black accounting.” After that, he was sentenced to 80 years of imprisonment term. How about Trump? Did he not give a s***. They have their system working there and it works smoothly.

Kolya: Everybody worked smoothly there.

So, to summarize, Sytnyk, the Director of Ukraine’s Anti-corruption Bureau, is admitting on tape that he tampered with the 2016 US presidential election, working for and/or with Hillary Clinton to manipulate the election in Hillary’s favor. Sytnyk was convicted in Ukraine’s highest court.

While all of this is front-page news in Ukraine, our own media is ignoring it. Imagine that! Our media is as corrupt as Sytnyk for not giving this bombshell a second of airtime.

Drain the swamp, Mr. President. Lock them all up!

Published in Clintons, Election 2020, Political News, Ukraine and US News