Electing Biden Would Cede the World to China 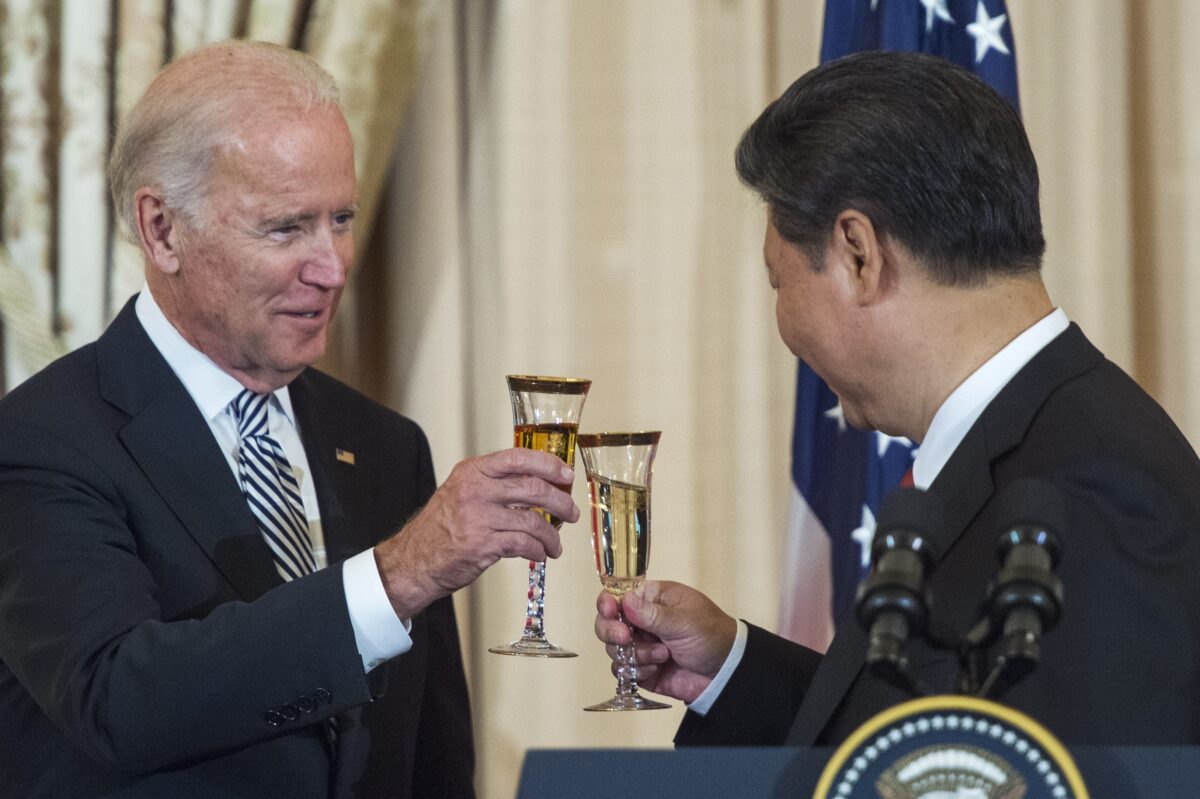 Electing Biden Would Cede the World to China

It might seem overheated to say electing Joe Biden would turn the world over to Communist China, but is it?

We already know that as recently as a year ago the former vice president dismissed any Chinese threat, informing an Iowa gathering “China is going to eat our lunch? Come on, man.”

Since then, via the CCP virus, not only has China eaten our lunch, they have eaten our dinner and breakfast as well, sent thousands of our citizens across the River Styx and left our once-stellar national economy in tatters with millions unemployed. Our children might not even be going to school next year.

But Joe had. He realized an elementary truth about communism as practiced in China, Russia or wherever it takes power—it exists on corruption. Corruption was and is one of the motors of communist, indeed all totalitarian, societies, second only to nepotism.

Biden already knew this (who wouldn’t?) in 2014 when he flew to Beijing on Air Force Two accompanied by his crack-loving, womanizing son Hunter of Burisma fame. We don’t know much of what happened between China and the United States on that trip, but Hunter returned with $1.5 billion investment for BHR Equity Investment Fund Management.

That was a company founded only the year before of which Hunter was listed on the website as a director next to his photograph.The latter was, not surprisingly, almost immediately removed due to what we call these days poor “optics.”

It was a similar impulse that led Joe to reverse, at least on the surface, the view of China he proclaimed in Iowa a year ago—“optics” again.

And speaking of, yet again, “optics,” he definitely had to pull back on calling Trump a “racist” and a “xenophobe” for shutting down flights from China to the United States.

This became especially true as it became clear the degree to which the CCP had lied about the virus, locking things down in China at the same time as they were shunting people off to the rest of the world while claiming human-to-human contact wasn’t dangerous.

Poor Joe. What’s a poor fella to do? And now he’s accused of “unmasking” that creep Mike Flynn who had the temerity to criticize the Iran Deal, that great feather in the cap of the Obama-Biden administration.

And then there’s that nasty John Durham. What’s he got up his sleeve? No doubt whatever it is will appear magically as some convenient “October surprise.”

It’s almost as if Joe should tell the Democrats to postpone the election because of the virus or resign so they can find a replacement.

But he could still win… and that’s the problem.

Because if he does, rollback to that 2014 trip with Hunter. What went on? Well, we don’t know, but we can bet the Chinese do and also bet it’s on a hard drive somewhere, probably more than one.

It’s not hard to imagine what would transpire if Joe were elected, even if there’s nothing on that hard drive or it’s been erased (neither are likely). Joe’s the guy who wanted to go along with the communist Chinese in the first place. “China’s going to eat our lunch? Come on, man.”

Let’s do business with them again. Forget about that “decoupling” stuff. Their penicillin’s just as good as ours, better maybe, and cheaper. Why should our great thinkers waste their time manufacturing computer chips 24/7? They should be creating. Who cares if the Chinese rip off an idea or two? There are more to come.

And soon enough, we’re back where we were. Actually further along. We are manufacturing for them, doing their bidding, just like the rest of the world.

One of Japan’s leaders put it this way during their heyday: “America will be our farm and Europe our boutique.”

That didn’t last long. But with China, with Biden’s acquiescence, it would. It would go further.