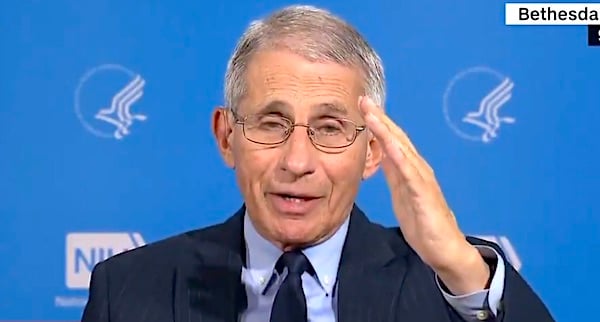 Amid "positive data" emerging from a clinical trial, the U.S. Food and Drug Administration is…

Amid “positive data” emerging from a clinical trial, the U.S. Food and Drug Administration is expected to authorize emergency use of the antiviral drug remdesivir to treat coronavirus patients.

Studies have shown it helped patients go from relying on oxygen to leaving the hospital in two weeks, reported the New York Times.

Dr. Anthony Fauci, the top White House infectious-disease expert, called the results of another study of the drug conducted by the National Institutes of Health results “very optimistic.”

It would be the third drug approved for emergency use by the FDA after it approved the anti-malaria drugs chloroquine and hydroxychloroquine.

The Dow spiked 550 points on news of the treatment.

The study by the National Institute of Allergy and Infectious Diseases, which Fauci has directed since 1984, has reached its primary conclusion, according to Gilead, which means it was found to be effective in the trial.

The Hill noted remdesivir, produced by California-based Gilead Sciences, originally was developed as a potential treatment for Ebola but was found to be ineffective.

Scott Gottlieb, former Food and Drug Administration commissioner under President Trump, expressed a note of caution in an interview with CNBC.

“It’s not going to be a cure, but it is going to be a drug potentially that if you use it particularly early in the course of a disease — you hang it in the emergency room when someone comes in with COVID, especially someone with risk factors that predict they’ll have a worse outcome from the disease — it could reduce their chances of having a really bad outcome,” he said.

Gottlieb said that’s the case with other antivirals used to treat the flu.

Fauci said the trial showed “that a drug can block this virus.”

He compared the finding to the arrival of the first antiretrovirals shown to be effective against HIV in the 1980s.

But he said there’s no timeline of when the FDA might approve remdesivir.

Meanwhile, a study by the Italian Society for Rheumatology indicated hydroxychloroquine is effective as a preventative for the coronavirus.

Among 65,000 patients on longterm hydroxychloroquine for rheumatoid arthritis and lupus, only 20 patients tested positive for COVID-19.