‘Don’t tempt me!’ Hillary Clinton mocks Donald Trump after he invites her to run again in 2020 saying she should ‘steal it away from Uber left Elizabeth Warren’ 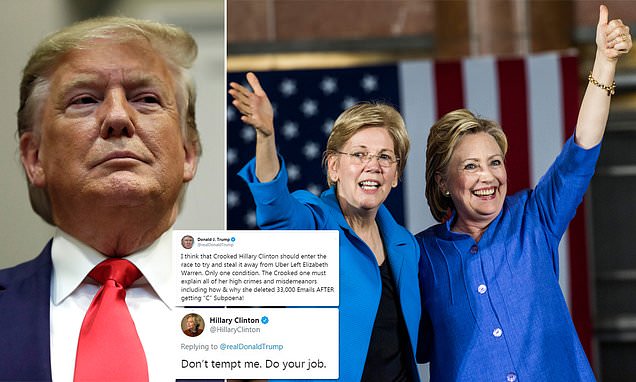 Trump says Clinton should try to 'steal' nomination from Warren

Donald Trump attempted to stir up trouble in the Democratic…

Donald Trump attempted to stir up trouble in the Democratic primary on Tuesday, telling Hillary Clinton she should make a third attempt at the presidency —and earned a prompt response: ‘Don’t tempt me.’

Trump said that she should try to ‘steal’ the nomination from Elizabeth Warren in a tweet in which he said the only ‘condition’ of his offer is that Clinton revisit her email scandal.

‘I think that Crooked Hillary Clinton should enter the race to try and steal it away from Uber Left Elizabeth Warren. Only one condition. The Crooked one must explain all of her high crimes and misdemeanors including how & why she deleted 33,000 Emails AFTER getting “C” Subpoena!’ he said in an apparent reference to former FBI director James Comey.