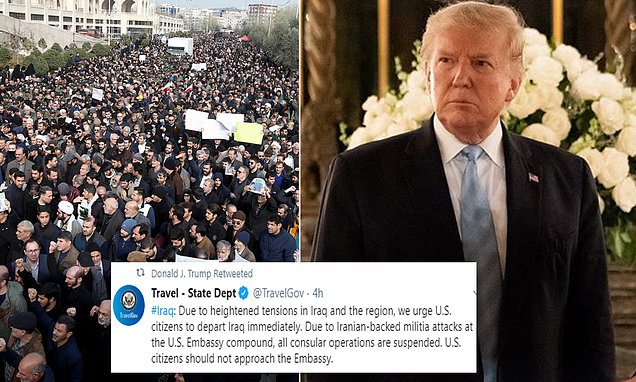 The president retweeted a warning from the State Department on Friday morning that advised Americans to leave the Middle East nation.

‘Due to heightened tensions in Iraq and the region, we urge U.S. citizens to depart Iraq immediately. Due to Iranian-backed militia attacks at the U.S. Embassy compound, all consular operations are suspended. U.S. citizens should not approach the Embassy,’ the tweet read.

Trump’s initial response to reports that an American airstrike killed the Iranian military leader was to tweet a photo of the American flag.

‘Iran never won a war, but never lost a negotiation!,’ he tweeted on Friday morning.

The president has not been seen since the attack but House Republican Leader Kevin McCarthy posted photos to his Instagram account of his time with Trump at Mar-a-Lago Thursday evening.

Iran has vowed ‘harsh retaliation’ for the strike near Baghdad’s airport that killed Soleimani, the architect of its interventions across the Middle East.