Donald Trump pledges to send in the national guard into Washington, California and New York as the hardest hit states are declared disaster zones 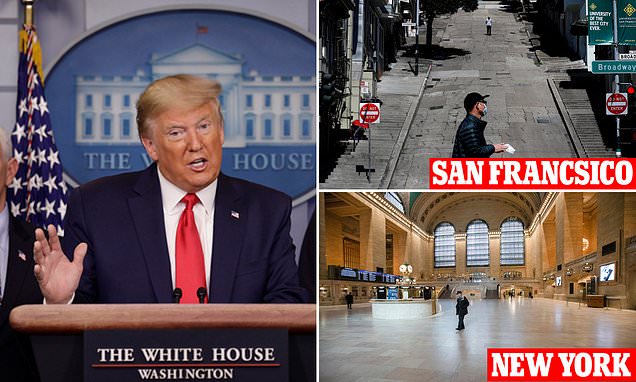 Trump to send in the national guard into Washington, California and NY

The disaster declaration will provide federal assistance for both emergency…

Donald Trump on Sunday pledged to send in the national guard into Washington, California and New York, as the hardest hit states were declared disaster zones.

The disaster declaration will provide federal assistance for both emergency protective measures and crisis counseling in Washington, the White House said.

Trump said Sunday: ‘And through (Federal Emergency Management Agency), the federal government will be funding 100 per cent of the cost of deploying national guard units to carry out approved missions to stop the virus while those governors remain in command.

‘We’ll be following them and we hope they can do the job and I think they will. I spoke with all three of the governors today, just a little while ago and they’re very happy with what we’re going to be doing.’

The president said FEMA will also provide thousands of hospital beds to New York, Califnoria and Washington plus dozens of medical stations which will be with the states in 48 hours.

Two naval hospitals – one the east and west coast – will also be used.

Trump said Sunday: ‘I’m a wartime president. This is a war — a different kind of war than we’ve ever had.’

He added: ‘We’re sort of a backup for states.’

In a statement Inslee said ‘today’s declaration does not unlock many forms of federal assistance we have requested to help workers and families who are badly hurting.

‘We will continue working with our federal partners to deliver the full suite of disaster assistance that is sorely needed in our state, such as expanded unemployment benefits for workers who lose their paychecks as a result of the COVID-19 crisis.’

California gov. Gavin Newsom has earlier written to Trump asking that the state be declared a ‘major disaster’.

He said: ‘Unfortunately, California has been disproportionately impacted by COVID-19.

There were more than 35,000 cases across the U.S. and close to 500 deaths. New York state accounted for 117 deaths, mostly in New York City.

On Sunday, New York passed Washington state, the initial epicenter of the U.S. outbreak, in the number of fatal cases.

New York Gov. Andrew Cuomo had said earlier: ‘I think the federal government should order factories to manufacture masks, gowns, ventilators, the essential medical equipment that is going to make the difference between life and death.’

Published in Coronavirus, Opinion, Trump and US News