Donald Trump 9/11 Proclamation: ‘We Are Reminded that Good Triumphs over Evil’ 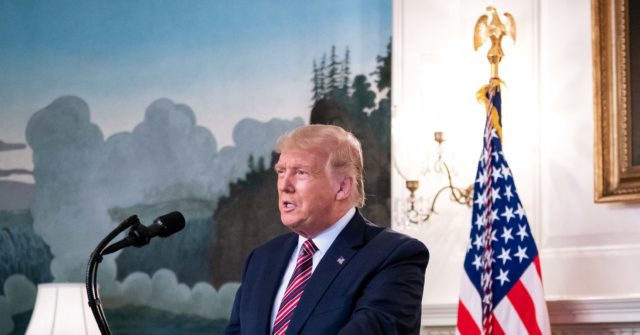 Donald Trump 9/11 Proclamation: 'We Are Reminded that Good Triumphs over Evil'

President Donald Trump remembered the fallen heroes of the 9/11 terror attacks on Friday, urging Americans to do the same.

“In 2001, our Nation, united under God, made an unbreakable promise never to forget the nearly 3,000 innocent Americans who were senselessly killed on September 11,” Trump wrote in his 9/11 proclamation for Patriot Day.

Trump’s statement recalled the heroism of Americans at the World Trade Center, the Pentagon, and those aboard Flight 93 that crashed in a field in Shanksville, Pennsylvania.

“The courage, heroism, and resilience Americans displayed on 9/11, and in its aftermath, are perpetual testaments to the spirit of our country,” the statement continued.

The president spoke about America’s character and how it rose to meet the horrific violence perpetrated on our country.

“Heroes sprang into action in the face of great peril to help save their fellow Americans,” he wrote. “Many laid down their lives.”

He asked Americans to “reaffirm” their dedication to American values of grit, determination, and freedom.

“As we recall the images of our American Flag raised from the ashes of Ground Zero and the Pentagon, we are reminded that good triumphs over evil,” he wrote. “We recommit ourselves to fortifying our cherished American values so that future generations will know in their souls that the United States is the land of the free and the home of the brave.”

In 2001, our Nation, united under God, made an unbreakable promise never to forget the nearly 3,000 innocent Americans who were senselessly killed on September 11th. On this sacred day — Patriot Day — we solemnly honor that commitment. https://t.co/LzAFPe72YX