“Death And Bomb Threats” Made Against China’s Embassy In Washington; Beijing Blames Trump 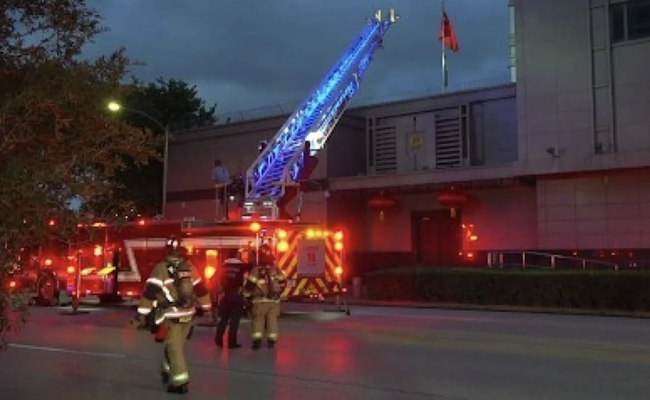 "Death And Bomb Threats" Made Against China's Embassy In Washington; Beijing Blames Trump

China's foreign ministry is trying to leverage the debate about…

Update (0815ET): Sen. Marco Rubio tweeted Wednesday morning that China’s Houston consulate was “a massive spy center”, and that “forcing it to close is long overdue”.

#China’s Houston consulate is a massive spy center, forcing it to close is long overdue.

Following a suspicious document fire that necessitated a visit from the local police yesterday, Washington has turned the tensions with Beijing up to ’11’ by ordering the immediate closure of the Chinese consulate.

Apparently, the incident occurred just as the US was ordering the abrupt closure of China’s consulate in Houston, citing a need to protect American intellectual property and data. The decision, which rattled global equity markets, has been decried as a dramatic escalation in bilateral tensions as Beijing condemned the order as an outrageous violation of international law. Spokespeople for the Chinese government also slammed the decision as outrageous and unprecedented.

Washington’s order, which according to WSJ was issued just yesterday, marks an “unprecedented escalation” and “a political provocation unilaterally launched by the US,” according to Chinese Foreign Ministry spokesman Wang Wenbin, who addressed the issue during his regular press briefing in Beijing.

“China urges the US to immediately rescind its erroneous decision, otherwise China will undertake legitimate and necessary responses.”

Reuters is now reporting that China is considering closing the US consulate in Wuhan in retaliation. Though we suspect those diplomats wouldn’t mind being stationed elsewhere.

Even Hu Xijin, the typically long-winded editor of the Global Times, could only manage a surprisingly brief “that’s crazy”.

The US asked China to close Consulate General in Houston in 72 hours. This is a crazy move.

State Department Spokeswoman Morgan Ortagus didn’t specify which specific actions, if any, inspired Washington’s decision, though she did say: “President Trump insists on fairness and reciprocity in U.S.-China relations.”

“The United States will not tolerate the PRC’s violations of our sovereignty and intimidation of our people, just as we have not tolerated the PRC’s unfair trade practices, theft of American jobs and other egregious behavior.”

Notably, the DoJ unveiled evidence of a massive hack of COVID-19-related research allegedly orchestrated by China.

So far, details from official sources are scant. However, it’s probably worth remembering the scene from yesterday’s ‘document fire’ incident: the Houston police and fire departments responded Tuesday night to a reported document fire at the Chinese Consulate. Footage taken from the building next door shows what appears to be barrels with burning material inside of them.

Seems like a totally normal and non-suspicious reaction to a closure order.

Stocks slumped during the Asian trading session; the offshore yuan also slumped against the greenback.

The Foreign Ministry spokesman continued to hammer the US, saying China has always treated American diplomats ‘with respect’ (including monitoring their every move), while this isn’t the first incident involving China’s diplomatic personnel in the US.

“In contrast, the US put restrictions on Chinese diplomats in June and last October, respectively, with no valid reason. [The US] has seized and opened mail and official supplies,” Wang said.

Back in December, Washington quietly expelled two Chinese diplomats suspected of espionage after they were caught driving to a sensitive military base in Virginia. But Chinese foreign ministry spokesman Geng Shuang rejected the claims when asked about them by reporters.

The HPD said it began receiving reports just after 2000 local time warning about documents being burned at 3417 Montrose Boulevard, where the consulate is located.

The consulate holds a special significance. According to information available online, the consulate “was the first one to be established” in 1979 when the US and China official re-established diplomatic relations. The consulate’s district covers eight southern US states, namely Texas, Oklahoma, Louisiana, Arkansas, Mississippi, Alabama, Georgia, Florida and an unincorporated territory, the Commonwealth of Puerto Rico.