Cops get attack of common sense at last: Katie Hopkins will NOT face charges over allegations that she incited racial hatred in migrant article 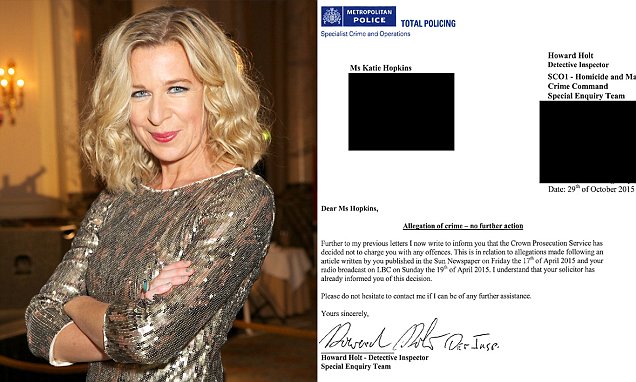 Katie Hopkins will not face charges over 'racial hatred' allegations

EXCLUSIVE: MailOnline columnist Katie Hopkins caused a storm when she wrote a newspaper article in…

Katie Hopkins will not face charges over allegations that she incited racial hatred in a newspaper article calling migrants ‘cockroaches’ and ‘feral humans’, it can be revealed today.

The 40-year-old MailOnline columnist caused a storm after writing a controversial article for the Sun in April entitled ‘Rescue boats? I’d use gunships to stop migrants’.

And three days later she was reported to the Metropolitan Police by Society of Black Lawyers (SBL) chairman Peter Herbert, who complained that her words were ‘offensive’ and ‘xenophobic’.

But Detective Inspector Howard Hold from the force’s homicide and major crime command unit has now written to Miss Hopkins to confirm she will not be charged following the article and her subsequent comments on LBC radio.

And the mother-of-three told MailOnline today: ‘I will not and will never apologise for standing up for what I believe in. People are not really sorry. They are sorry to be disliked.

‘I find it surprising that at a time when police are so undermanned they can’t afford to turn up to burglaries or find cars after a crash, they think a woman with an opinion is their highest priority.

‘I am grateful Scotland Yard enjoys my writing but I would encourage them to focus their energies on those who present a real threat to this country which I love.’

She added that the officers who interviewed her under caution appeared to make it clear there was no case to answer, but that she would be referred to the Crown Prosecution Service because it was the SBL making the complaint.

Miss Hopkins said: ‘During my interview under caution, I delivered a long Hopkins rant about the importance of free speech and how I stood by every word I said and wrote.’

She continued: ‘The police need to spend less time wanting to be seen to be taking action, and more time focusing on those in need of real help.’ 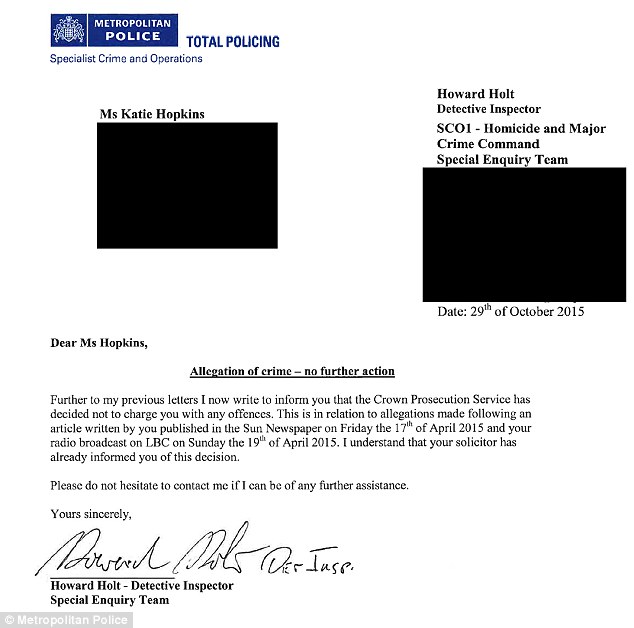