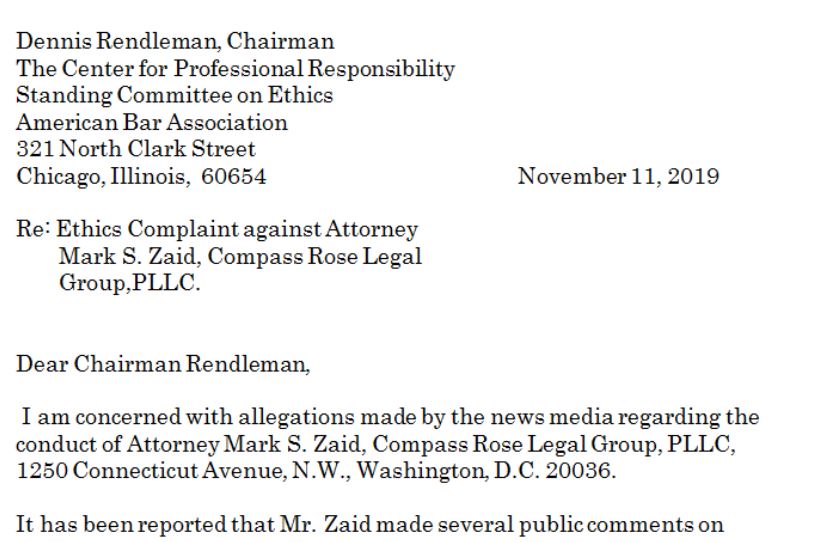 “PREJUDICIAL TO THE ADMINISTRATION OF JUSTICE” by Sharon Rondeau (Nov.…

“PREJUDICIAL TO THE ADMINISTRATION OF JUSTICE”

(Nov. 11, 2019) — On Monday morning, P&E reader and New York State citizen Robert Laity sent a letter of complaint to the American Bar Association (ABA) concerning one of the attorneys representing the Ukraine “whistleblower” whose allegations spurred the current “impeachment inquiry” against President Trump.

The attorney, Mark S. Zaid, tweeted just days after Trump was inaugurated that a “#coup has started.  First of many steps. #rebellion. #impeachment will follow ultimately. #lawyers…”

Zaid is one of two co-counsels assisting lead attorney Andrew Bakaj representing an “intelligence community” individual who filed a nine-page complaint with the House and Senate Intelligence Committees on August 12, 2019 and reportedly received guidance from the office of House Intel Committee Chairman Adam Schiff (D-CA28) before approaching the Intelligence Community Inspector General (ICIG) with his allegations.

One of the co-counsels, “I. Charles McCullough, III Esq.,” was formerly ICIG.  “In this role, he reported directly to then-Director of National Intelligence, the Honorable James R. Clapper,” his biography at the Compass Rose Legal Group, PLLC states.

The law firm has established a fund” to help the Intelligence Community whistleblower.” Bakaj and Zaid have issued a number of other public statements on their client and Trump’s presumed guilt.

Some outlets have reported that the complaint, which was admittedly based on second-hand information, aligned with the transcript of the July 25 phone call between Trump and Ukrainian President Volodymyr Zelenskiy which became the catalyst for the impeachment inquiry announced by Speaker of the House Nancy Pelosi on September 24.

The White House released a transcript of the call later that day.

The complaint alleged that Trump was attempting to use the power of his office to convince Zelenskiy to launch or relaunch an unwarranted investigation into former Vice President Joseph Biden and his son Hunter. 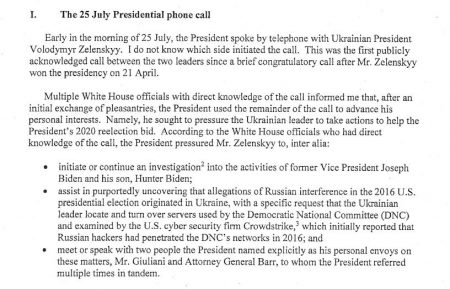 The transcript mentions “Biden” twice and “Biden’s son,” a reference to Hunter Biden, once in the same paragraph.

According to The Washington Examiner, the whistleblower interacted with Joe Biden during his time at the National Security Council and worked on issues related to Ukraine during the latter two years of the Obama regime.  “As an experienced CIA official on the NSC with the deep knowledge of Ukraine that he demonstrated in his complaint, it is probable that the whistleblower briefed Biden and likely that he accompanied him on Air Force Two during at least one of the six visits the 2020 candidate made to the country,” The Examiner reported on October 10.