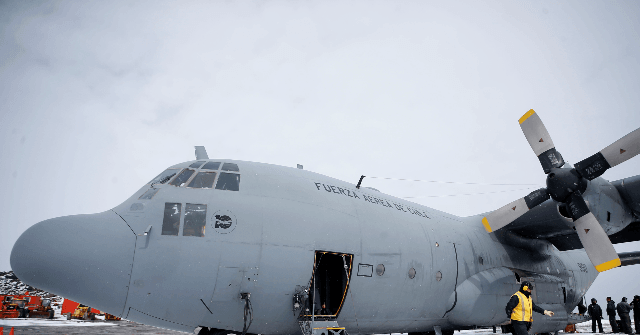 President Sebastián Piñera of Chile confirmed reports of the disappearance…

President Sebastián Piñera of Chile confirmed reports early Tuesday of the disappearance of a Hercules C-130 military aircraft en route to Antarctica, describing the incident as an “accident.”

The Chilean military, with aid from neighboring Uruguay, Argentina, and the United States, has begun a search of what officials consider the likely crash site of the plane. There is not at press time any evidence that the plane crashed, but its sudden disappearance off of military radar and complete lack of communication with the air traffic regulators monitoring it suggests the plane fell somewhere along its path to Chile’s Antarctic scientific research site.

Authorities in Santiago confirmed 38 people, about half members of the crew and half soldiers, were onboard the flight, which departed Punto Arenas, Chile, at 2 p.m. local time on Monday. Three passengers were identified as civilians. It was expected to land at Chile’s Eduardo Frei military base in Antarctica at about 7:30 p.m. local time, the armed forces confirmed in a press release, but disappeared about an hour before. By midnight on Tuesday, military officials declared that the airplane had likely crashed and launched a search and rescue operation in the Drake Passage, the waters in between the southernmost continent and South America.

The Argentina outlet Infobae described the aircraft’s mission as one of “supply and logistics support,” ensuring that the military base was both fueled and properly furbished in light of the difficult conditions on the continent.

President Piñera announced via Twitter that he would cancel his scheduled visit to Argentina Tuesday – to attend the inauguration of leftist President-elect Alberto Fernandez – and that Fernandez had pledged to help in search and rescue operations.

“My thoughts and prayers are with the family of the 38 passengers and crew of the C-130 airplane of the [armed forces],” Piñera wrote, adding that Fernandez also said he would soon visit Chile:

. With the help of many we are making every humanly possible effort in the search tasks of the plane.

My thoughts and prayers are with the families of the 38 crew members and passengers of the Fach C-130 plane. I just spoke with Pdte elect of Argentina Alb Fernández to inform him that I will not be able to attend in exchange for command today. He confirmed that he will soon make an official visit to Chile.

Also offering support, Piñera later added, was conservative Brazilian President Jair Bolsonaro, who confirmed at least one Brazilian military official with experience in Antarctic operations had already been assigned to the mission.

“I have just spoken to President [Jair Bolsonaro] who has offered all of Brazil’s help in the tasks to search for the [armed forces] aircraft,” Piñera said. “With the help of many, we are making every effort humanly possible to find the plane.”

In televised remarks, Piñera reportedly referred to the disappearance as an “accident.” Neither the president nor any senior officials have indicated that any evidence exists that the aircraft was attacked or suffered any foul play. The lack of indication of any partisan or terrorist attack did not stop rumors from spreading online, however. The official Twitter account of the armed forces of Chile debunked an alleged press statement circulating in leftist social media circles indicating that the military would use the missing aircraft to crack down on radical leftists, which have been rioting and burning down a significant amount of the capital for the past month.

Published in Military and World News