Child miners aged four living a hell on Earth so YOU can drive an electric car: Awful human cost in squalid Congo cobalt mine that Michael Gove didn’t consider in his ‘clean’ energy crusade 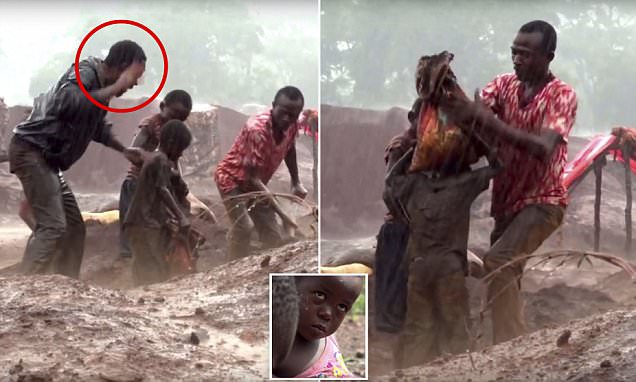 Dorsen, just eight, is one of 40,000 children working daily…

Picking through a mountain of huge rocks with his tiny bare hands, the exhausted little boy makes a pitiful sight.

His name is Dorsen and he is one of an army of children, some just four years old, working in the vast polluted mines of the Democratic Republic of Congo, where toxic red dust burns their eyes, and they run the risk of skin disease and a deadly lung condition. Here, for a wage of just 8p a day, the children are made to check the rocks for the tell-tale chocolate-brown streaks of cobalt – the prized ingredient essential for the batteries that power electric cars.

And it’s feared that thousands more children could be about to be dragged into this hellish daily existence – after the historic pledge made by Britain to ban the sale of petrol and diesel cars from 2040 and switch to electric vehicles.

It heralds a future of clean energy, free from pollution but – though there can be no doubting the good intentions behind Environment Secretary Michael Gove’s announcement last month – such ideals mean nothing for the children condemned to a life of hellish misery in the race to achieve his target.

Dorsen, just eight, is one of 40,000 children working daily in the mines of the Democratic Republic of Congo (DRC). The terrible price they will pay for our clean air is ruined health and a likely early death.

Almost every big motor manufacturer striving to produce millions of electric vehicles buys its cobalt from the impoverished central African state. It is the world’s biggest producer, with 60 per cent of the planet’s reserves.

The cobalt is mined by unregulated labour and transported to Asia where battery manufacturers use it to make their products lighter, longer-lasting and rechargeable.

The planned switch to clean energy vehicles has led to an extraordinary surge in demand. While a smartphone battery uses no more than 10 grams of refined cobalt, an electric car needs 15kg (33lb).

Goldman Sachs, the merchant bank, calls cobalt ‘the new gasoline’ but there are no signs of new wealth in the DRC, where the children haul the rocks brought up from tunnels dug by hand.

Adult miners dig up to 600ft below the surface using basic tools, without protective clothing or modern machinery. Sometimes the children are sent down into the narrow makeshift chambers where there is constant danger of collapse.

Cobalt is such a health hazard that it has a respiratory disease named after it – cobalt lung, a form of pneumonia which causes coughing and leads to permanent incapacity and even death.

Even simply eating vegetables grown in local soil can cause vomiting and diarrhoea, thyroid damage and fatal lung diseases, while birds and fish cannot survive in the area.

No one knows quite how many children have died mining cobalt in the Katanga region in the south-east of the country. The UN estimates 80 a year, but many more deaths go unregistered, with the bodies buried in the rubble of collapsed tunnels. Others survive but with chronic diseases which destroy their young lives. Girls as young as ten in the mines are subjected to sexual attacks and many become pregnant.

Daily Dose Of Straight Talk With John B. Wells Episode 1389