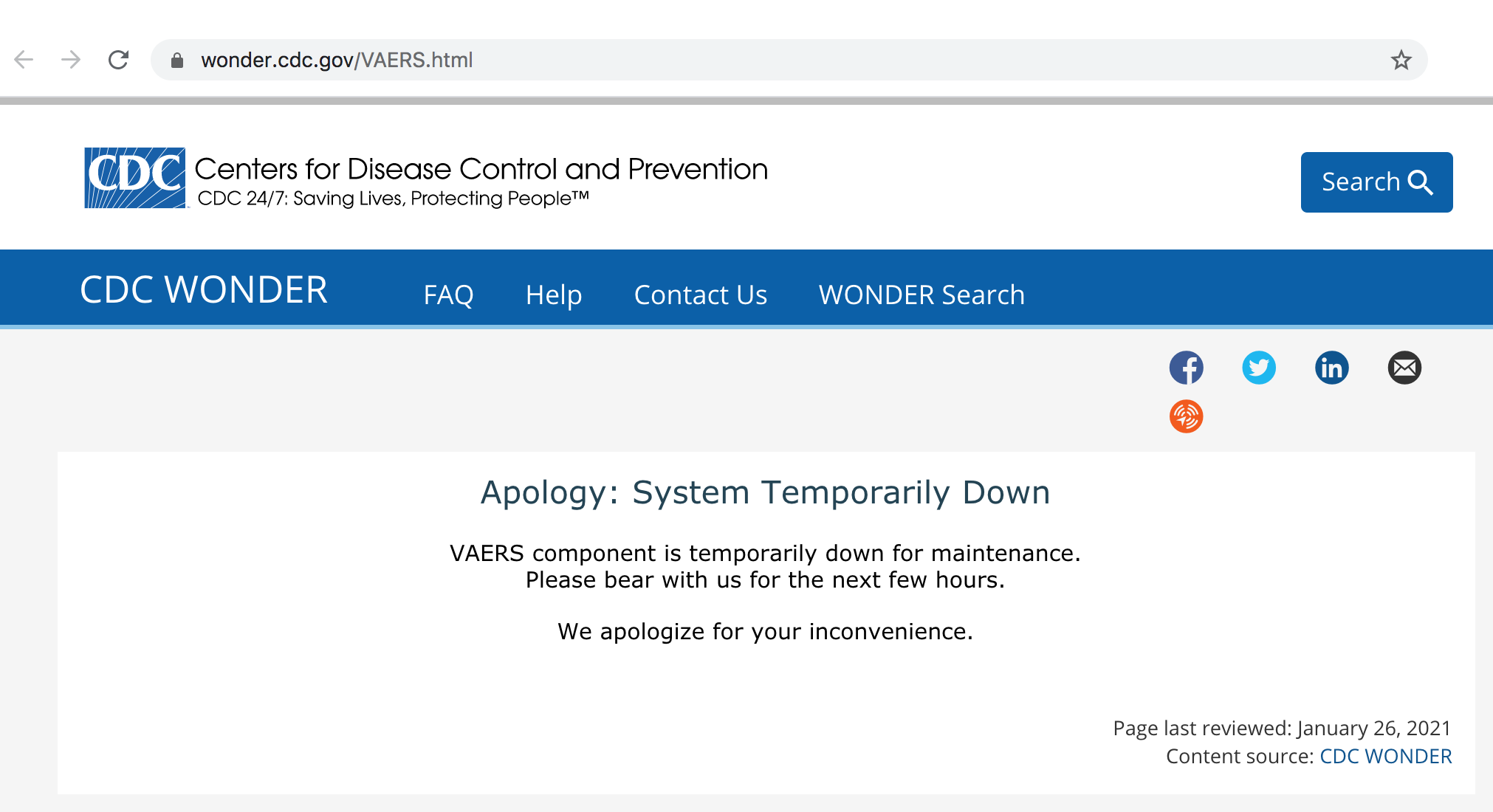 The Defender reached out to the CDC to ask why the system is down, and…

Children's Health Defense
By Children’s Health Defense Team
*
The Defender reached out to the CDC to ask why the system is down, and when it will be working again. We got a recording that said the media department was experiencing an “unusually high volume of calls,” and we should “hang up and try again later.”

Editor’s note: Good news VAERS is up and running. If you’re interested in data related to vaccine reactions to COVID vaccines, visit the VAERS website.

Anyone hoping to find the latest information on vaccine injuries that have been reported to the Centers for Disease Control and Prevention (CDC) is out of luck, at least temporarily.

The CDC’s Vaccine Adverse Event Reporting System (VAERS) allows the public to search the database of vaccine injuries reported to the system. Visitors to the site can search by a number of criteria, including type of injury and vaccine product.

However, The Defender learned today that the search portion of the VAERS website — VAERS WONDER System — has been down since Tuesday. Visitors to the system’s website receive this message:

When The Defender reached out to the CDC’s media department to find out why the system is down, and when it’s expected to be working again, we got a recording that said the media department was experiencing an “unusually high volume of calls,” and that callers should “hang up and try again later.”

So @CDCgov says VAERS went down because it couldn't handle the volume of requests it was getting (this was an email to an academic who asked).

"Starting (Monday) at 7:30 am, the server was overwhelmed by too many incoming queries… We are working to resolve this problem."

Anyone who suspects they’ve been injured by a vaccine can still report the injury here — the reporting part of the VAERS website is still working. Children’s Health Defense also asks that people report injuries to VaxxTracker and file a report on the CHD website.

As of Jan. 15, 181 deaths had been reported to VAERS as possibly being related to COVID vaccines. The system is updated every Friday.

VAERS, along with vaccine injury reporting systems in other countries, has come under fire recently as being inadequate, especially during the rollout of the Pfizer and Moderna mRNA vaccines which were rushed to market, and are still considered experimental by the U.S. Food and Drug Administration.

A 2010 study by the U.S. Department of Health and Human Services concluded that “fewer than 1% of vaccine injuries” are reported to VAERS and experts say the government’s reporting system is “broken.”