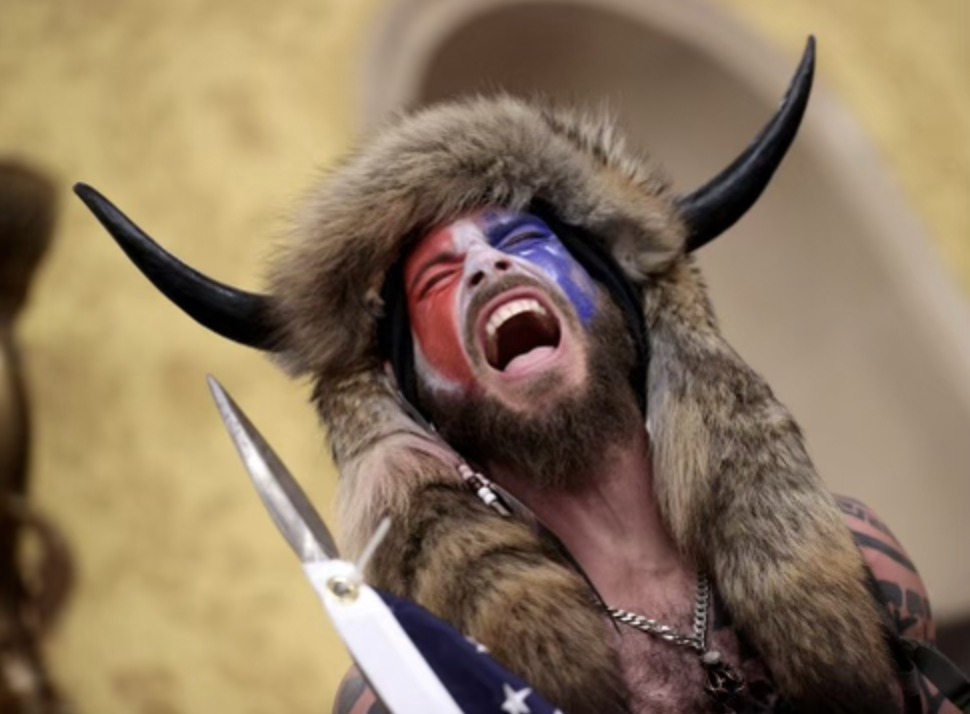 Jake Angeli – recently charged with “violent entry and disorderly conduct on Capitol grounds” by the Department of Justice – has previously participated in climate change protests despite the mainstream media depicting him as a fervent Trump supporter.

AZCentral described Angeli as one of “hundreds march[ing] in Arizona in solidarity with climate strikes around the world” in September of 2019. The article’s collection of pictures contains a total of three actions shots of Angeli protesting the issue captured by two separate photographers.

The images of Angeli passionate participation in the protest are accompanied by the following captions, which describe him “leading the crowd in a yell” and “demanding action on climate change”:

Jake Angeli, shamanic practitioner, leads the crowd in a yell before the march in solidarity with climate activism groups across the country to the Arizona State Capitol Building Friday, September 20, 2019.
Jake Angeli marches from the Maricopa County Courthouse to the Arizona State Capitol on Friday, September 20, 2019, to demand action on climate change.

The image below shows Angeli standing beside a sign insisting “the ice caps are melting”:

The demonstrations Angeli participated in were part of the Greta Thunberg-linked climate change campaign, where “millions of youths around the world” protested to encourage governments to “do more to combat climate change — and do it faster.”

A strike organizer outlined the effort’s goals in a CNN op-ed, virtually indistinguishable from those of far-left Democrats such as Alexandria Ocasio-Cortes.

On Friday, we’re striking for a Green New Deal; for the immediate cessation of fossil-fuel projects on sovereign indigenous land; for environmental justice; for the protection and restoration of nature; and for sustainable agriculture.

Representative Ocasio-Cortez even offered “high-fives” to D.C. students participating in the strike according to Vox. 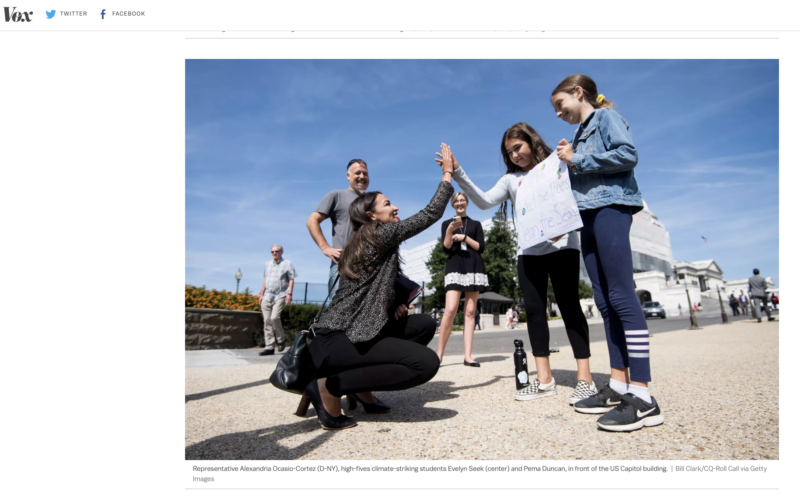 Establishment media outlets – keen on portraying Angeli as a devout Trump supporter – have omitted this belief from their summaries of Angeli.

He described himself as a QAnon digital warrior, a shaman and ordained minister, a published author and former YouTube personality and, above all, a huge fan of President Trump.

CNN’s five-paragraph description of Angeli also failed to mention his climate change activism entirely despite including his involvement at a “pro-Trump” protest “outside the Maricopa County vote-counting center” – the same county Angeli protested the progressive cause in:
The protester, Jake Angeli — known by followers as the QAnon Shaman — quickly became a symbol of the bizarre and frightening spectacle as photos circulated of him roaming the Capitol halls holding an American flag affixed to a spear in one hand and a bullhorn in the other, and even standing shirtless atop the Senate dais. Angeli, who lives in Arizona, couldn’t be reached for comment, but his cousin, Adam Angeli, confirmed that the man in the horns was his relative in a brief call with CNN Wednesday. Adam Angeli said he thought his cousin might be between jobs and that “he’s a patriot, he’s a very big United States of America type of a person. Jake Angeli’s Facebook page is filled with posts evoking the conspiracy theories of QAnon, whose adherents believe in a ludicrous theory that there is a cabal of Satan-worshipping pedophiles who have infiltrated the highest reaches of American government and are being opposed by President Trump. Some of Angeli’s Facebook posts have a violent edge, such as a meme declaring “we shall have no real hope to survive the enemies arranged against us until we hang the traitors lurking among us.” One photo on Angeli’s Facebook page depicts him adorned in the fur and horns, taking aim towards the camera with a rifle. In recent months, Angeli has been a regular presence at pro-Trump protests in Arizona, including demonstrations outside the Maricopa County vote-counting center.