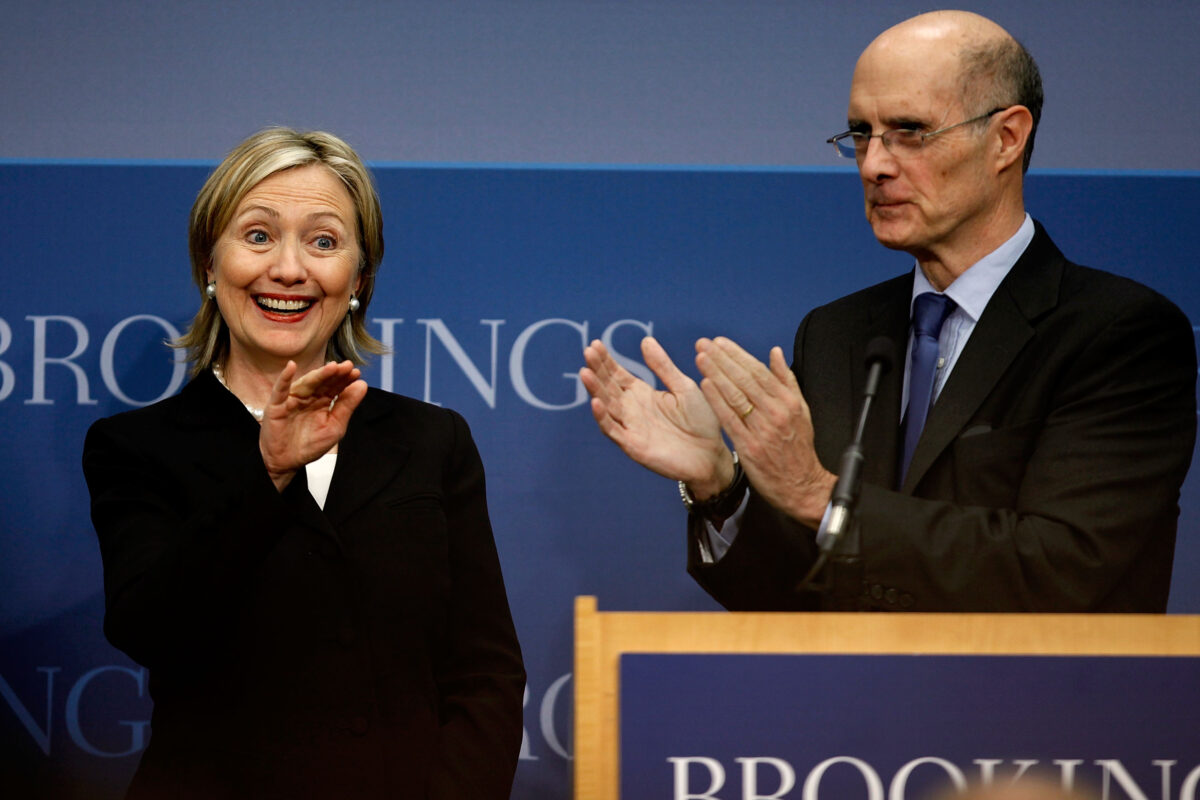 Republicans in the House and Senate are raising new questions…

Republicans in the House and Senate are raising new questions about the involvement of current and former Brookings Institution associates with Christopher Steele, the author of the infamous discredited dossier that alleged collusion between then-candidate-Donald Trump and Russia.

Sen. Chuck Grassley (R-Iowa) and Sen. Ron Johnson (R-Wis.) last week demanded all records regarding the communications between the State Department and Brookings Institution employees in 2016 and 2017 about Steele and the Trump campaign. House Intelligence Committee ranking member Devin Nunes (R-Calif.) said last week that he wants to know why Strobe Talbott, the president of the think tank in 2016, was in touch with Steele and received the spy’s dossier.

The Clinton campaign ultimately funded the dossier, a fact the FBI failed to mention despite using the Steele dossier’s claims to back up an already error-ridden warrant application to spy on a Trump campaign associate. The dossier ended up at the epicenter of the now-debunked narrative of collusion between the Trump campaign and Russia. The U.S. intelligence community included a summary of the dossier in an annex to the consequential January 2017 assessment on Russia’s interference in the 2016 U.S. election.

The focus on the Brookings Institution was prompted by the emergence in the United States and the UK of new evidence on links between the think tank and Steele.

Proceedings in two lawsuits in the UK revealed that Talbott, then president of the Brookings Institution, engaged with Steele in 2016 about his Trump research and received a copy of the dossier. Talbott had also disseminated the dossier to at least one Brookings colleague.

The U.S. government in July declassified the FBI’s interview with Steele’s main source, Igor Danchenko, who worked under Talbott at Brookings from 2005 to 2010. Talbott said he learned about Steele’s election work from a colleague, according to Steele’s testimony.

While there is no direct evidence of a coordinated effort, a number of other current and former Brookings associates were involved with Steele and the dossier. The Brookings colleague to whom Talbott gave a copy of the Steele dossier before it was made public was Fiona Hill. Danchenko and Hill co-authored a paper during Danchenko’s last year at the think tank.

“House Intelligence Committee Republicans are taking a deep look at Brookings’ role in the development and dissemination of the Steele dossier and why they were involved in those activities. Every new revelation shows a deeper involvement than previously known, and we aim to get a full accounting,” Jack Langer, communications director for Nunes, wrote in an email to The Epoch Times.

Talbott led Brookings, one of the top think tanks in the United States, from 2002 to 2017. Its employees donate overwhelmingly to Democrats. The institution’s elite profile and revolving door with the federal bureaucracy in Washington affords it significant influence over policymaking.

In August 2016, Talbott called Steele and told him that he had learned from a colleague about Steele’s work on Trump, according to a transcript obtained by The Epoch Times of proceedings in a UK court. Steele speculated that Talbott learned about his work from either United Nations Ambassador Susan Rice or Assistant Secretary of State Victoria Nuland. Both Rice and Nuland had worked for Brookings before they entered the Obama administration, according to Steele. Nuland returned to the think tank after she left government service in 2017.

“He spoke in fairly cryptic terms, but he was aware that we had material of relevance to the U.S. election,” Steele said of Talbott.

Months later and days before the 2016 election, Steele shared a copy of the dossier with Talbott. After the election, Steele wrote to Talbott asking to discuss what Talbott did with the dossier and how the two should handle the allegations within the document, according to the transcript of remarks in another UK trial obtained by The Epoch Times.

“I know this is not straight forward but we need to discuss the package we delivered to you the other week, and sooner the better. What you thought of it, what you did with it, how we (both) should handle it and the issue it highlights going forward etc.,” Steele wrote, according to Andrew Caldecott, the attorney representing claimants suing Steele.

Talbott is a long-time Clinton associate. He served as the deputy secretary of state in the Clinton administration. Talbott’s wife, Brooke Shearer, is the sister of Cody Shearer, a Clinton operative who compiled an anti-Trump dossier of his own before the 2016 election. Talbott didn’t immediately respond to a request for comment.

In addition to disseminating the dossier to well-connected people such as Talbott in the private sector, Steele gave installments of the dossier to the FBI and to late Sen. John McCain (R-Ariz.) through an associate, David Kramer. McCain spoke at six Brookings events. Kramer co-authored two articles published on the Brookings website.

Steele shrouded the dossier and its sources in mystery. Part of the enduring interest in the document has been the assumption that its sources had deep ties to Kremlin insiders, a facade that has been recently shattered by the identification of Igor Danchenko as the primary sub-source of the dossier.

Despite painstaking steps by the FBI to redact details about Danchenko based on his background and travels revealed from the partly declassified interview released last month, internet researchers triangulated his identity within days of the release of the document. The revelation of the identity struck a body blow to the already-shattered credibility of the dossier because Danchenko wasn’t based in Russia as the dossier implied and as the DOJ inspector general reported in 2019. Instead, Danchenko has spent nearly two decades in the United States. For five of those years, he worked at the Brookings Institution.

Danchenko told the FBI that he sourced his information from childhood friends and acquaintances. He told the bureau he had no idea where some of the claims Steele attributed to him came from. Steele had also presented some of the rumors Danchenko passed on as more substantiated than they really were.

The fact that Danchenko and Hill authored a paper together in 2010 allows for the possibility that the two were in still touch in 2016. Hill was a senior fellow at Brookings as early as May 6, 2016. As one of the witnesses in the impeachment trial against Trump, she told lawmakers that she met Steele in person in 2016 and received a copy of Steele’s dossier from Talbott. Hill said she was shocked to learn that Steele was the author of the dossier and suspected that the document was tainted with Russian disinformation.

Danchenko’s attorney didn’t immediately respond to a request for comment.

Grassley and Johnson specifically named Danchenko in a records request sent to the Department of Justice. The senators also named Nuland and Rice in a separate request to the State Department.

Nuland and Rice, the Obama administration officials who Steele thought had informed Talbott, have their own ties to the Brookings Institution.

Rice was a senior fellow in foreign policy at Brookings from 2002 to 2009, during the tenure of Talbott. The declassification of Rice’s email to herself on the last day of the Obama administration revealed that President Barack Obama himself was involved in the investigation of Trump’s incoming national security adviser Michael Flynn.

According to Steele, Nuland also worked at Brookings prior to entering the Obama administration. She was listed as a nonresident fellow at the institution since at least September 2017.

Nuland’s husband, Robert Kagan, is a foreign policy commentator at Brookings. He authored a number of columns for The Washington Post criticizing Trump and propping up the Russia collusion narrative, including in a column titled “The United States and Russia aren’t allies. But Trump and Putin are.”