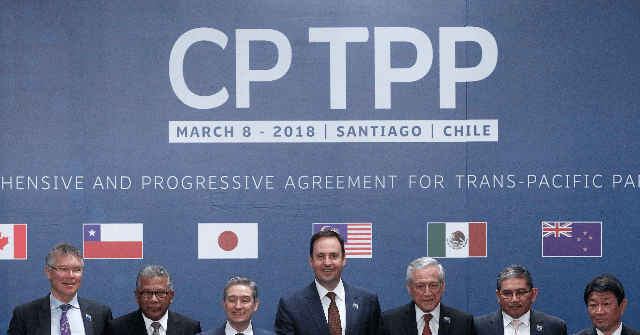 Britain is taking advantage of its newfound autonomy from the EU to apply for membership of the Comprehensive and Progressive Trans-Pacific Partnership (CPTPP).

Before Brexit, Britain could not strike its own international trade deals, with such agreements being the purview of Brussels. This prevented the country from trading freely with many key partners, including the United States, Australia, and New Zealand — as vested interests in other EU member-states felt deals with these countries would not be to their advantage.

This has changed with Brexit, with the Comprehensive and Progressive Trans-Pacific Partnership (CPTPP), comprised of Australia, Brunei, Canada, Chile, Japan, Malaysia, Mexico, New Zealand, Peru, Singapore, and Vietnam being viewed by Boris Johnson’s government as a bloc with a great deal of potential, particularly if the United States joins it in the coming years.

The United Kingdom’s sole remaining outpost in the Pacific is the British Overseas Territory of the Pitcairn Islands, populated by a few dozen people descended largely from the mutinous crew of the HMS Bounty, who settled in 1790.

It has strong historic and cultural links with many of the CPTPP’s existing members, however, several of which were formerly British imperial possessions some of which still retain Queen Elizabeth II as head of state.

Tomorrow we will formally apply to join #CPTPP 🇬🇧

“One year after our departure from the EU we are forging new partnerships that will bring enormous economic benefits for the people of Britain,” said Prime Minister Johnson.

“Applying to be the first new country to join the CPTPP demonstrates our ambition to do business on the best terms with our friends and partners all over the world and be an enthusiastic champion of global free trade.”

International Trade Secretary Liz Truss, who will formally table Britain’s application to join the CPTPP in Japan on Monday morning, added that joining the pact would “create enormous opportunities for UK businesses that simply weren’t there as part of the EU and deepen our ties with some of the fastest-growing markets in the world.”

“It will mean lower tariffs for car manufacturers and whisky producers, and better access for our brilliant services providers, delivering quality jobs and greater prosperity for people here at home,” she added.

Britain does have free trade deals signed or in the works with some CPTPP members individually, however, and some Brexiteers who are concerned that trade deals with low-wage economies could be a recipe for outsourcing may question whether it is a good idea for Britain to pursue free trade agreements with any and all non-EU countries just because it can now.