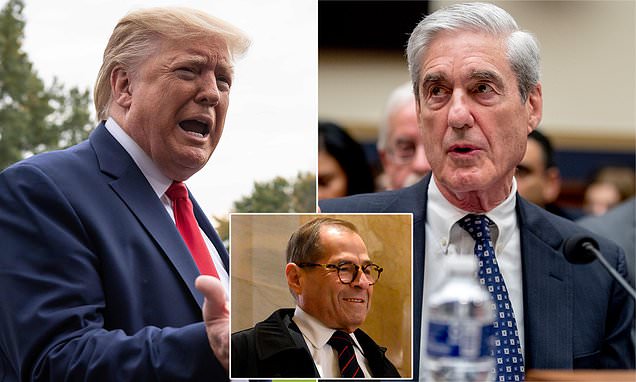 The judge set an October 30 deadline for Trump's Justice…

A federal judge ruled on Friday that House Democrats on an impeachment crusade must have access to the parts of Robert Mueller’s Russia report that were kept from them because of grand jury secrecy rules.

And Judge Beryl Howell, the chief jurist in Washington, D.C.’s federal courts, handed President Donald Trump a broader defeat by ruling that Democrats are engaged in ‘an official impeachment inquiry.’

That could be a game-changer. The White House has refused to obey subpoenas and document requests from House committees engaged in impeachment inquiries, insisting Speaker Nancy Pelosi must first hold a politically fraught floor vote to formally authorize it.

But Howell declared Friday that ‘[e]ven in cases of presidential impeachment, a House resolution has never, in fact, been required to begin an impeachment inquiry.’

‘The Speaker of the House of Representatives has announced an official impeachment inquiry, and the House Judiciary Committee, in exercising Congress’s “sole Power of Impeachment” … is reviewing the evidence set out in the Mueller Report,’ Howell wrote.

He set an October 30 deadline for Trump’s Justice Department to hand over ‘[a]ll portions of Special Counsel Robert S. Mueller III’s Report on the Investigation Into Russian Interference In The 2016 Presidential Election that were redacted pursuant to’ restrictions typically placed on grand jury materials.

Democrats will also get ‘any underlying transcripts or exhibits referenced in the portions of the Mueller Report that were redacted’ for grand jury secrecy reasons.

The Mueller report, the result of 22 months of secretive interviews and testimony, exists in three versions. The complete report is available only to senior federal law enforcement officials like the FBI director and the attorney general.

Congress got a near-complete version, with grand jury materials redacted in black stripes.

The publicly released version included far more redactions, including more than 2,000 lines of text that are unreadable.