BREAKING NEWS: Donald Trump unveils his plan for ‘two-state solution’ to bring peace to the Middle East – with a TUNNEL linking the West Bank and the Gaza Strip 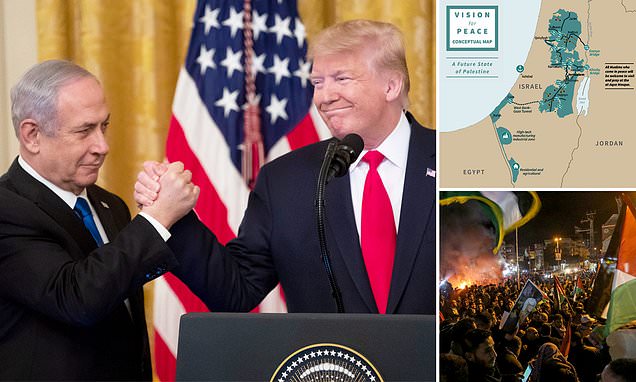 Donald Trump unveiled his long-awaited Middle East peace plan Tuesday afternoon with embattled Israeli Prime Minister Benjamin Netanyahu at his side – saying there would be a ‘two-state solution’ with a tunnel linking the West Bank to the Gaza Strip.

Trump said it was a ‘vision for peace, prosperity and a new future’ for both Israel and Palestine as he spoke in the East Room of the White House, reading from a teleprompter and declining to take questions.

He claimed Israel had a taken ‘a giant leap’ by signing up to a two-state solution and claimed it was a ‘win-win’ for both sides.

The plan unveiled on Tuesday more than doubles the territory currently under Palestinian control, although it also recognizes Israeli sovereignty over major settlement blocs in the West Bank, something to which the Palestinians will almost certainly object.

The Palestinians were not present, nor were Democrats, and neither was Netanyahu’s chief opponent Benny Gantz, who he will face in an election in March. Netanyahu himself had hours earlier given up fighting for immunity from corruption charges and is now indicted on them.

But Trump said: ‘For the first time in many, many decades, I can say: This will work.’

Netanyahu said he backed the deal because it ‘recognized Israeli sovereignty over sections of Judea and Samaria’ – meaning what is currently defined as the West Bank – ‘which are vital to our security.’

He said Trump had recognized that ‘Israel must have sovereignty in the Jordan Valley,’ something which Palestinians have said they will never agree to.

Trump boasted about moving the U.S. embassy to Jerusalem and recognizing the Golan Heights as Israeli territory – reversing decades of U.S. policy – and also boasted about leaving the Iran nuclear deal.

Trump claimed it could be a ‘last opportunity’ for the Palestinians to achieve statehood and gave as the reason the ‘smart team’ who had worked on it, highlighting the role of his son-in-law Jared Kushner, whose wife Ivanka was in the audience.

He said that Britain’s prime minister Boris Johnson was among world leaders who had called him, saying that leaders had offered ‘to do anything to help.’

He also praised Mike Pompeo, his secretary of state, who had been revealed to have threatened, berated and launched an f-word rant at an NPR reporter then complained because he thought she had agreed to keep it secret.

‘You did a good job on her,’ Trump said, a comment likely to be seized on by critics.

There was a standing ovation for Pompeo from an audience which included among others, prominent Jewish American including casino billionaire Sheldon Adelson, and Alan Dershowitz, fresh from defending Trump at his impeachment trial.

The plan, which has been shrouded in secrecy, was revealed as the president’s lawyers prepare to wrap his defense in his impeachment trial in the Senate.

The president said Monday of the plan that ‘we’ll see whether or not it catches hold.’

‘If it does, that would be great, and if it doesn’t, we can live with it, too. But I think it might have a chance,’ he said alongside Netanyahu at the White House on Monday, before he also hosted Netanyahu’s political challenger Benny Gantz.

Netanyahu, praising Trump as ‘the greatest friend that Israel’s had in the White House’, described the plan as ‘the deal of the century’.

Trump, whose team has long been working on the outlines of such a plan, has repeatedly boasted that he is the most pro-Israeli U.S. president in history.

On Monday, Trump also met separately with Gantz, but the limelight fell almost entirely on the incumbent prime minister – as will any political dividends from a peace plan favoring Israel.

No Palestinians have been invited to the White House event. They say they were never included in crafting the plan and they say it fails to address their wish to end Israeli occupation and the expansion, encouraged by Netanyahu, of Jewish settlements on Palestinian land.

Last week, Trump said he had spoken to the Palestinians ‘briefly’ about the plan.

‘We’ve spoken to them briefly. But we will speak to them in a period of time,’ he said. ‘And they have a lot of incentive to do it. I’m sure they maybe will react negatively at first but it’s actually very positive for them.’

Palestinian leaders have dismissed the U.S. peace initiative as one-sided.

And Palestinian prime minister Mohammed Shtayyeh on Monday urged international powers to boycott the plan, which he said was designed ‘to protect Trump from impeachment and protect Netanyahu from prison.’

Netanyahu faces corruption charges in Israel for bribery, fraud and breach of trust.

‘It is not a Middle East peace plan,’ Shtayyeh told a cabinet meeting. ‘This plan gives Israel sovereignty over Palestinian territory.’

Trump has slashed aid to the Palestinians, while making big concessions to the Israelis, including formalizing U.S. recognition of the divided city of Jerusalem as the Israeli capital.

‘It’s very good for them, in fact it’s overly good for them,’ Trump said Monday of the plan’s provisions for Palestine. ‘We think we will have ultimately the support of the Palestinians.’

The Palestinians seek the West Bank as the heartland of a future independent state and east Jerusalem as their capital. Most of the international community supports their position, but Trump has reversed decades of U.S. foreign policy by siding more blatantly with Israel. The centerpiece of his strategy was recognizing Jerusalem as Israel’s capital and moving the American Embassy there. He’s also closed Palestinian diplomatic offices in Washington and cut funding to Palestinian aid programs.

Those policies have proven popular among Trump’s evangelical and pro-Israel supporters and could give him a much-needed boost from his base as the Senate weighs whether to remove him from office and as he gears up for a reelection battle this year.

Kushner, a Trump adviser and the Republican president’s son-in-law, has been the architect for the plan for nearly three years. He’s tried to persuade academics, lawmakers, former Mideast negotiators, Arab governments and special-interest groups not to reject his fresh approach outright.

Trump’s peace initiative was expected in the autumn but has been subject to multiple postponements.

The Palestinians refuse to even speak to Trump, saying he’s biased in favor of Israel, and they are calling on Arab representatives to reject the Tuesday event at the White House.

The Palestinian leadership also has encouraged protests in the West Bank, raising fears that the announcement in Washington could spark a new round of violence. Ahead of the announcement, the Israeli military said it was reinforcing infantry troops along the Jordan Valley.

Published in US News and World Politics