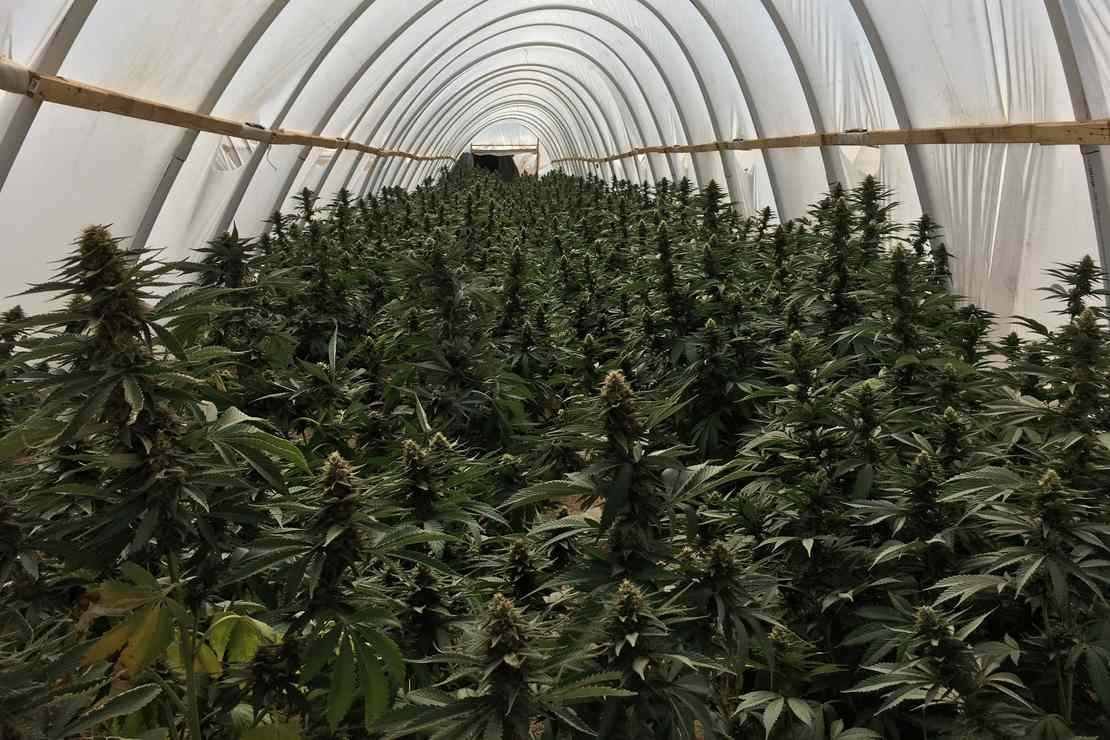 NEW: Bulldozers are now razing the illegal grows to the ground pic.twitter.com/Znhq4nrZCn

Nearly 500 law enforcement personnel worked in teams serving search warrants at numerous locations throughout the valley. Warrants yielded the seizure of five firearms and 23 individuals on various felonies and misdemeanor arrests — including one man who claimed to have come into the United States from the Mexican State of Sinaloa just last month.

Why is Sinaloa significant? According to the DEA, Sinaloa is home to the oldest organized drug smuggling and trafficking organization or cartel in Mexico:

The Sinaloa Cartel controls drug trafficking activity along the Pacific Coast of Mexico. Illicit drugs distributed by the Sinaloa Cartel are primarily smuggled into the United States through crossing points located along Mexico’s border with California, Arizona, New Mexico and west Texas.

This notoriously violent drug cartel has infiltrated deep into California’s high desert and other areas of the country. As I wrote last month, no community is safe from border crime. At a press conference Tuesday, Rep. Garcia made clear this infiltration is due to the Biden administration’s lax southern border security:

What we’ve seen the last few months, frankly, are the result of a lack of law enforcement especially at our southern border.

We end up with disorder and disarray in our local communities.

The Antelope Valley is nearly 300 miles from the southern border and yet, it was home to one of the largest illegal drug operations ever found. The illegal grow site contained over 70 grow houses and cultivated a crop worth an estimated $50 million dollars.

That’s just one site. Authorities believe there are currently over 500 illegal grow sites in the high desert backyard of Los Angeles alone.

Today we made needed progress combating the illegal marijuana grows impacting communities in #CA25. I am grateful for the good work from @LASDHQ and other law enforcement entities today. pic.twitter.com/VEY9akxbOD

Legal marijuana grows are strictly regulated and contained. Illegal marijuana grows cause major threats to the communities they hide in:  violent crime rises sharply, environmental impacts to land and water, and law enforcement resources are stretched even thinner.

Illegal Marijuana grows negatively impact the surrounding communities through the use of toxic and banned pesticides and fertilizers which can seep into the watershed. Residents are intimidated and threatened by cartel operatives. Water is stolen and streams are diverted away from agricultural farms and legal marijuana grows putting them out of business.

With over $380 million dollars of illegal grows bulldozed so far, authorities look to continue this effort until every illegal grow site is eradicated from the Antelope Valley and surrounding counties. That’s a tall order, for sure, in today’s climate of defunding and disrespecting law enforcement.

It’s beyond time for our Border Czar Vice President Harris to stop laughing and actually visit the border. Local law enforcement must be given the respect and resources they need to protect not only the border but our communities within the nation as well.

It’s time for Harris to do her job. Secure the damn border.