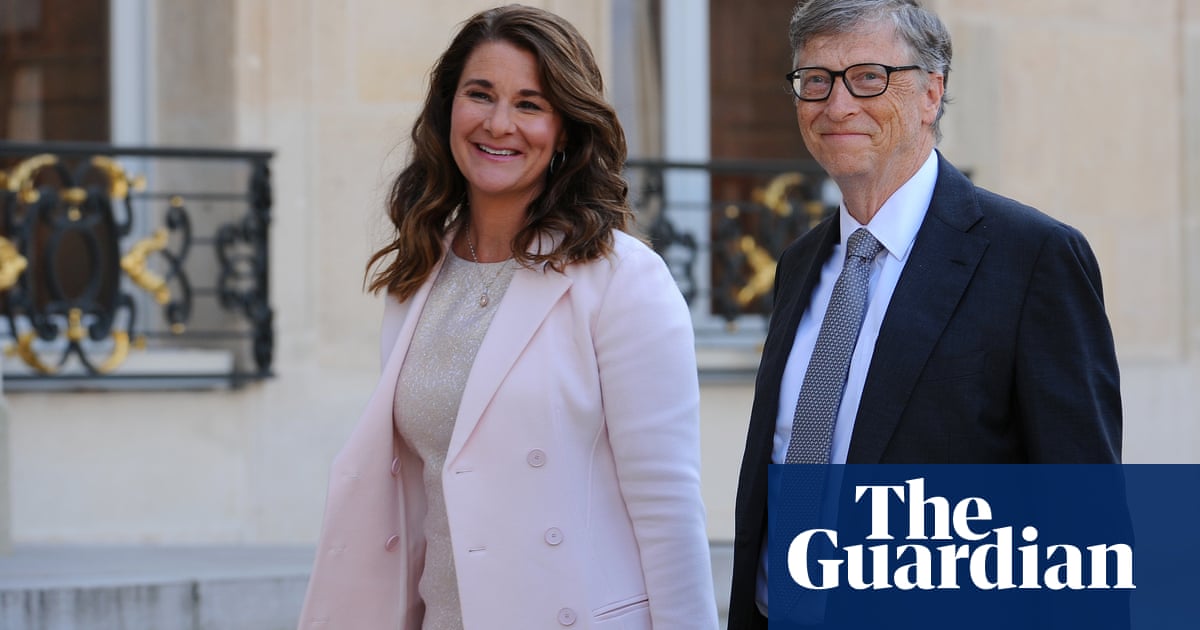 Bill and Melinda Gates to divorce after 27 years of marriage

Pair say in statement ‘we no longer believe we can grow together as a couple’ but will continue to run foundation together.

Bill and Melinda Gates have announced they are to divorce after 27 years of marriage, saying they “no longer believe we can grow together as a couple”.

The Microsoft co-founder turned philanthropist and his wife have built up a combined $124bn (£89bn) fortune, making them among the five richest couples in the world.

“After a great deal of thought and a lot of work on our relationship, we have made the decision to end our marriage,” the pair said in a joint statement posted on Twitter on Monday.

The couple, who jointly run the Bill and Melinda Gates Foundation, a huge funder of global health and disease prevention initiatives, including the fight against coronavirus, said they would continue to run the foundation together.

“We continue to share a belief in that mission and will continue our work together at the foundation, but we no longer believe we can grow together as a couple in this next phase of our lives. We ask for space and privacy for our family as we begin to navigate this new life,” they said.

The pair “will continue to work together to shape and approve foundation strategies, advocate for the foundation’s issues and set the organization’s overall direction,” the Gates Foundation said in a statement.

Jennifer Gates, writing on Instagram on Monday, said it had “been a challenging stretch of time for our whole family”.

“Thank you for understanding our desire for privacy while we navigate the next phase of our lives,” she wrote.

The surprise announcement comes less than two weeks after the pair appeared virtually at an event for healthcare workers fighting the pandemic.

Melinda, 56, has in the past said their marriage has been “incredibly hard”, saying that Bill, 65, regularly works 16-hour days and can find it hard to make time for the family.

“Believe me, I can remember some days that were so incredibly hard in our marriage where you thought, ‘Can I do this?’” she said in an interview with the Sunday Times in 2019 to mark their 25th anniversary.

Melinda said Bill spent weeks debating whether or not they should marry, and even made a list of pros and cons for marriage on a whiteboard.

“When he was having trouble making the decision about getting married, he was incredibly clear that it was not about me, it was about, ‘Can I get the balance right between work and family life?’” she said.

Bill is the world’s fourth-richest person with his estimated $124bn (£90bn) fortune, but he would have been even more vastly wealthy if he had not committed to giving away at least half of his fortune before he dies.

Since 1994, he has donated at least $40bn to the Bill and Melinda Gates Foundation, which funds IT education in the US and healthcare and poverty initiatives around the globe – including funding large-scale projects tackling HIV and malaria. Their foundation has more than $51bn in assets, according to a tax filing.

In 2010 the couple and Warren Buffett created the Giving Pledge, a promise to give at least half of their wealth to charity, and called on other billionaires to join them. More than 170 of the world’s richest people, including Mark Zuckerberg, Mike Bloomberg and George Lucas, have so far signed up.

Bill said the pledge was “about building on a wonderful tradition of philanthropy that will ultimately help the world become a much better place”.

He told ITV’s This Morning in 2016 that giving his children huge sums would not be “a favor”. “It distorts anything they might do, creating their own path,” he said. “This money is dedicated to helping the poorest. They know that, they are proud of that, they go on trips with us to see the work that’s being done.”

The Gates Foundation was one of the earliest and biggest funders of research into vaccines and treatments for coronavirus. Bill has said he is prepared to spend billions on preventing the spread of the virus. “It’ll be a few billion dollars we’ll waste on manufacturing for the constructs that don’t get picked because something else is better,” he said. “But a few billion in this, the situation we’re in, where there’s trillions of dollars … being lost economically, it is worth it.”

At least one critic of billionaire benefactors cited the Gates’ split as a cautionary tale in the wisdom of concentrating so much sway over global humanitarian issues under the control of super-wealthy individuals.

“The Gates divorce will do more than upend a family’s life. It will ramify into the worlds of business, education, public health, civil society, philanthropy, and beyond,” Anand Giridharadas, author of the book Winners Take All told Reuters. “That is because our society has made the colossal error of allowing wealth to purchase the chance to make quasi-governmental decisions as a private citizen.”

It is the second divorce among the super-rich in recent years, following the Amazon chief executive Jeff Bezos’s 2019 separation from his wife, MacKenzie Scott.

Their divorce turned Scott into the world’s fourth-richest woman, with a $38bn fortune. It was by some distance the largest divorce settlement in history. The previous record was $2.5bn paid to Jocelyn Wildenstein when she divorced the art dealer Alec Wildenstein in 1999.

Scott has promised to give away all of her fortune, and gave away almost $6bn last year, thought to be the largest sum ever given in a single year. Bezos is the only member of the five richest people in the US not to have signed up to the Giving Pledge initiative to give away at least half of his fortune.

Published in Bill Gates, Q Twitter Threads and US News