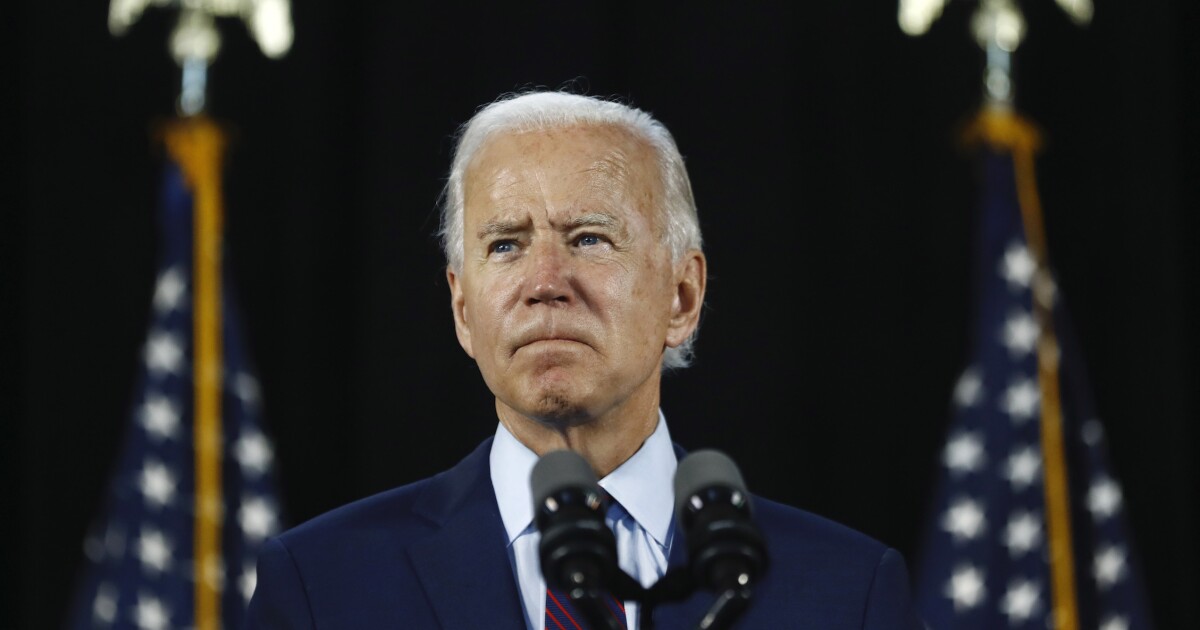 Joe Biden said he is putting Russia “on notice” about…

Joe Biden said he is putting Russia “on notice” about election meddling on Monday as Democrats in the House and Senate revealed that they had asked the FBI for a full congressional briefing on an alleged “foreign interference campaign” targeting Congress.

Biden, the former vice president and presumptive 2020 Democratic nominee, released a lengthy statement proclaiming that “foreign interference in the U.S. electoral process represents an assault on the American people and their constitutional right to vote.” This followed comments by the candidate on Friday when Biden said he had started getting intelligence briefings and asserted the Russians “are still engaged in trying to delegitimize our electoral process” and China “and others” are “engaged as well in activities that are designed for us to lose confidence in the outcome.”

“Today, I am putting the Kremlin and other foreign governments on notice. If elected president, I will treat foreign interference in our election as an adversarial act that significantly affects the relationship between the United States and the interfering nation’s government,” Biden said on Monday, adding, “Russia is not the only foreign actor seeking to interfere in our democracy. Increasingly, other states have shown an interest in copying Russia’s tactics.”

Hours earlier, congressional Democrats revealed that on July 13 House Speaker Nancy Pelosi of California, Senate Minority Leader Chuck Schumer of New York, House Intelligence Committee Chairman Adam Schiff of California, and Senate Intelligence Committee Vice Chairman Mark Warner of Virginia sent a letter to FBI Director Christopher Wray requesting that the FBI “provide a defensive counterintelligence briefing to all Members of the House of Representatives and the Senate regarding foreign efforts to interfere in the 2020 U.S. presidential election.” The Democrats claimed, “Congress appears to be the target of a concerted foreign interference campaign” related to the 2020 election.

“Gang of Eight (and others impacted) were already briefed. Weeks ago. This request is a CYA,” tweeted Richard Grenell, the former acting director of national intelligence.

DOJ Inspector General Michael Horowitz’s lengthy December report criticized the DOJ and the FBI for at least 17 “significant errors and omissions” related to the Foreign Intelligence Surveillance Act warrants against Trump campaign associate Carter Page and for the bureau’s reliance on Steele’s unverified dossier. Steele put his research together at the behest of the opposition research firm Fusion GPS, funded by Hillary Clinton’s presidential campaign and the Democratic National Committee through the Perkins Coie law firm. Declassified footnotes now show that the FBI was aware that Steele’s dossier might have been compromised by Russian disinformation.

Biden said on Monday that “in spite of President Trump’s failure to act, America’s adversaries must not misjudge the resolve of the American people to counter every effort by a foreign power to interfere in our democracy.”

Trump’s critics claim he has been reluctant to proclaim that Russia interfered in 2016, including during a July 2018 summit in Helsinki with Russian President Vladimir Putin. But the Trump administration has repeatedly sanctioned Russia and Russian officials for election meddling and other malign activities, as well as provided large amounts of offensive weaponry to Ukraine as it deals with incursions by Russian forces. Trump signed an executive order in September 2018 that called for the imposition of sanctions in the event of foreign interference in elections.

Trump confirmed to the Washington Post earlier this month that he had ordered a cyberattack against troll farms operated by Russia’s Internet Research Agency, the group which special counsel Robert Mueller concluded conducted a social media disinformation campaign during the 2016 election. Trump criticized former President Barack Obama’s own inaction, saying, “He knew before the election that Russia was playing around … And he said nothing. And the reason he said nothing was that he didn’t want to touch it because he thought [Hillary Clinton] was winning.”

The Senate Intelligence Committee released a bipartisan report in February criticizing the Obama administration for fumbling the response to Russian meddling, finding that “the U.S. government was not well-postured to counter Russian election interference activity with a full range of readily-available policy options.”

The book Russian Roulette, written by journalists Michael Isikoff and David Corn, said Obama’s national security adviser Susan Rice told Obama’s cybersecurity team to “stand down” and not carry out an offensive cyber response against Russia, and Obama cybersecurity coordinator Michael Daniel testified to the Senate in June 2018 that “those actions were put on the back burner, yes.”

Obama, Biden, and the Democratic Party harshly criticized then-candidate Mitt Romney for his warnings about Russia and Putin in 2012, but Democrats blamed the Kremlin as one of the culprits for Trump’s victory four years later.

Obama made headlines when he criticized Romney over Russia in an October 2012 debate, saying, “Gov. Romney, I’m glad you recognize that al Qaeda is a threat, because a couple of months ago when you were asked what’s the biggest geopolitical threat facing America, you said Russia. And the 1980s are now calling to ask for their foreign policy back.”

Romney, now a junior senator representing Utah, held his ground. “Russia, I indicated, is a geopolitical foe. And I said in the same paragraph that Iran is the greatest national security threat that we face,” he said. “I have clear eyes on this. I’m not going to wear rose-colored glasses when it comes to Russia or Mr. Putin.”

Biden also derided Romney during the campaign, claiming he was “mired in a Cold War mindset” and calling him a “Cold War holdover” with an “apparent determination to take U.S.-Russian relations back to the 1950s.”

After Obama and Biden defeated Romney and won a second term in 2012, Putin’s Russia annexed Crimea and made military incursions into eastern Ukraine, among other malign actions.

In March, officials from the Office of the Director of National Intelligence told lawmakers rejected a stream of media reports based upon classified briefings on election security.

“The IC has not concluded that the Kremlin is directly aiding any candidate’s reelection or any other candidates’ election. Nor have we concluded that the Russians will definitely choose to try to do so in 2020,” the ODNI’s declassified fact sheet read. “This is not a Russia-only problem. China, Iran, other countries like North Korea and Cuba, and non-state actors all have the opportunity, means, and potential motive to interfere in the 2020 elections.”

Last week, the United States, United Kingdom, and Canada jointly accused Russian intelligence of likely attempting to hack into groups conducting COVID-19 vaccine development in all three countries in an effort to steal their research.

Mueller’s two-year investigation concluded, “the Russian government interfered in the 2016 presidential election in sweeping and systematic fashion” but “did not establish” any criminal conspiracy between Trump and Russia.