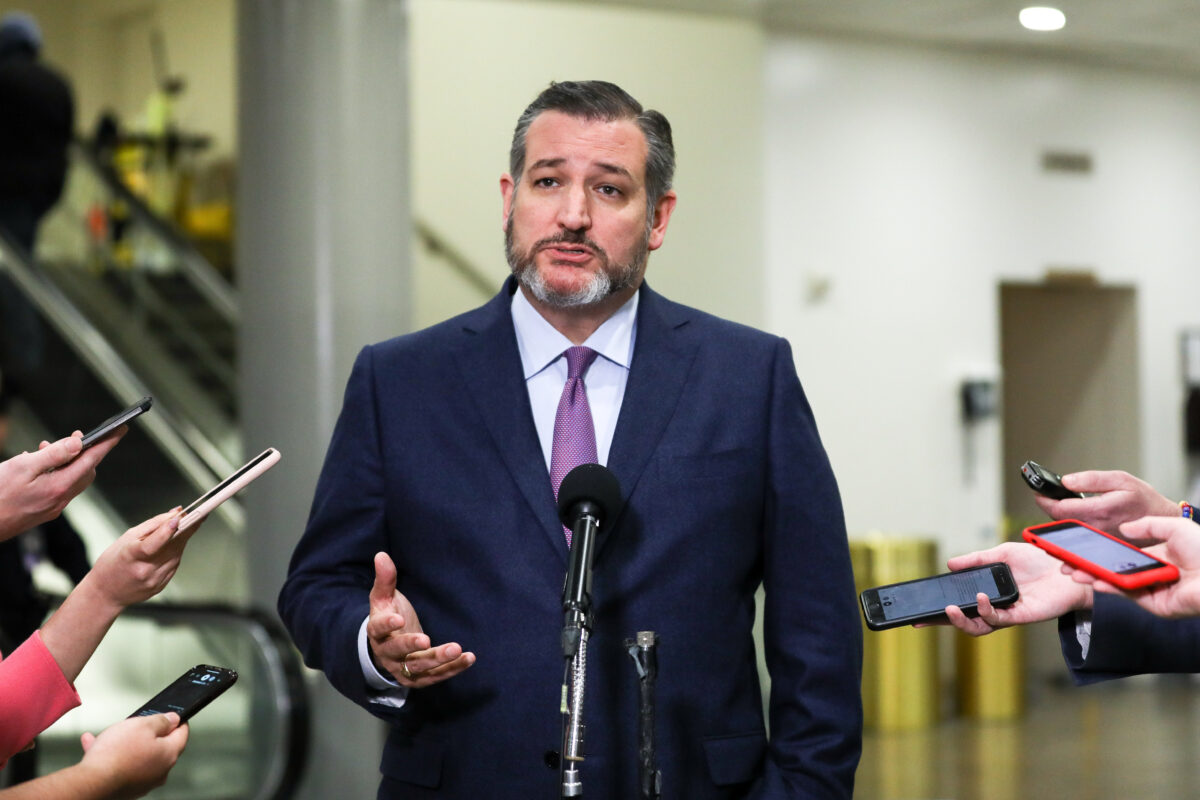 The Biden administration is rushing to embrace the Chinese Communist Party (CCP)—a policy strategy Sen. Ted Cruz (R-Texas) called “dangerous” in a video he posted that seeks to bring attention to comments made by the president’s cabinet nominees.

The warm relationship—which has already emerged in the beginning weeks of the administration—threatens to undo years of efforts to counter the CCP. Under the Trump administration, the United States began responding to Beijing’s “unrestricted warfare” strategy by ratcheting up its war of words and escalating its countermeasures.

Cruz told The Epoch Times via email that China “poses the single greatest geopolitical threat to the United States over the next century.”

“We need serious, clear-eyed policymakers to confront that threat,” he added. “One of the really disturbing patterns we’ve seen with Biden nominee after Biden nominee is their rush to embrace the worst elements of the Chinese Communist Party. I will continue working with my colleagues to protect our national security.”

The Epoch Times reached out to the Biden administration for comment but did not immediately receive a response.

On his first day full day on the job, Secretary of State Antony Blinken—who has a decades-old relationship with Biden—told reporters the U.S.-China relationship was “arguably the most important relationship that we have in the world.”

Blinken said he favored cooperation with China on climate change and other issues of shared concern, while also endorsing the determination that the previous administration made that China is committing genocide against Muslims in Xinjiang.

Meanwhile, Governor Gina Raimondo, Biden’s nominee to be Secretary of the Department of Commerce, has refused to commit to keeping Huawei Technologies on the Commerce Department’s Entity List, which would stop it from acquiring American technology.

China’s Huawei has received bipartisan scrutiny over security concerns, Beijing notably requires its companies to share its information with the Chinese Communist Party’s intelligence sector. Washington has repeatedly stated that Huawei—founded in 1987 by a former People’s Liberation Army engineer—is an extension of the regime.

Another nominee, Linda Thomas-Greenfield, is Biden’s nominee for Ambassador to the United Nations. She received criticism over her 2019 remarks at an event sponsored by the CCP-backed Confucius Institutes. Cruz recently joined three of his colleagues on the Senate Foreign Relations Committee to vote against advancing Linda Thomas-Greenfield’s nomination to the full Senate floor.

At the 2019 event, Greenfield spoke positively about China, telling the audience that the country has invested in Africa in a number of ways, including railway projects and other infrastructure development. Africa would not benefit from competition between the United States and China, she added, saying the United States could “learn from China and its recent success on the continent.”

“The U.S. should be focused on building a strong partnership with Africa which is based on shared values of peace, prosperity, sustained economic growth and development, and a firm commitment to good governance, gender equity, and the rule of law. I see no reason why China cannot share in those values. In fact, China is in a unique position to spread these ideals given its strong footprint on the continent,” she said.

Senate Foreign Relations Chairman Jim Risch (R-Idaho) said the biggest issue with her speech “was the lack of acknowledgment of the malign activities of China.” Greenfield defended herself, telling senators that she has a long track record of acknowledging those activities, and expressed regret for accepting the invitation to speak at the Savannah State University Confucius Institute.

Alejandro Mayorkas, the recently confirmed Secretary of the Department of Homeland Security “allegedly abused his power to provide special government favors to benefit well-connected Democrats, which resulted in a high-level official at Huawei obtaining an EB-5 visa,” according to a press release from Cruz’ office. Cruz opposed the nomination of Mayorkas.

In 2013, Mayorkas, then a nominee under the Biden administration, was under investigation based on allegations he personally intervened to win an approval for Gulf Coast Funds Management, a financing company that was headed by the late Anthony Rodham, the brother of former secretary of state Hillary Clinton. Emails obtained by the office of Sen. Chuck Grassley (R-Iowa) show that “after winning approval to participate in the foreign visa program, at least one of the visas sought by Rodham’s firm was for a vice president of Huawei Technologies.”

Aside from the comments by some of Biden’s nominees, the president’s administration is also carrying out a number of actions that would be beneficial to the CCP.

Under Biden’s hand, the United States is rejoining the Paris Climate accord. China is the world’s largest financier and builder of both fossil fuel and renewable infrastructure worldwide, according to the Climate Action Tracker. It is the largest emitter of CO2 emissions in the world.

The United States is also now rejoining the World Health Organization. Former President Donald Trump accused the WHO of refusing to act on reforms recommended by the United States, including providing proof of its independence from the CCP. Since the pandemic first broke out in Wuhan, China, WHO repeated the Chinese regime’s talking points. It initially parroted the Chinese regime’s official statements that there was little or no risk of human-to-human transmission of the virus.

The new administration is also delaying a Chinese military-related investment ban. In China, certain companies have names similar, but not identical to, communist Chinese military companies. Under Biden, the U.S. Treasury Department is temporarily allowing American investment into those companies.

Robert Gates, the defense secretary under the Obama administration, told CBS in an interview last year he believes Biden has “been wrong on nearly every major foreign policy and national security issue over the past four decades.”

Published in Biden, China, Political News and US News