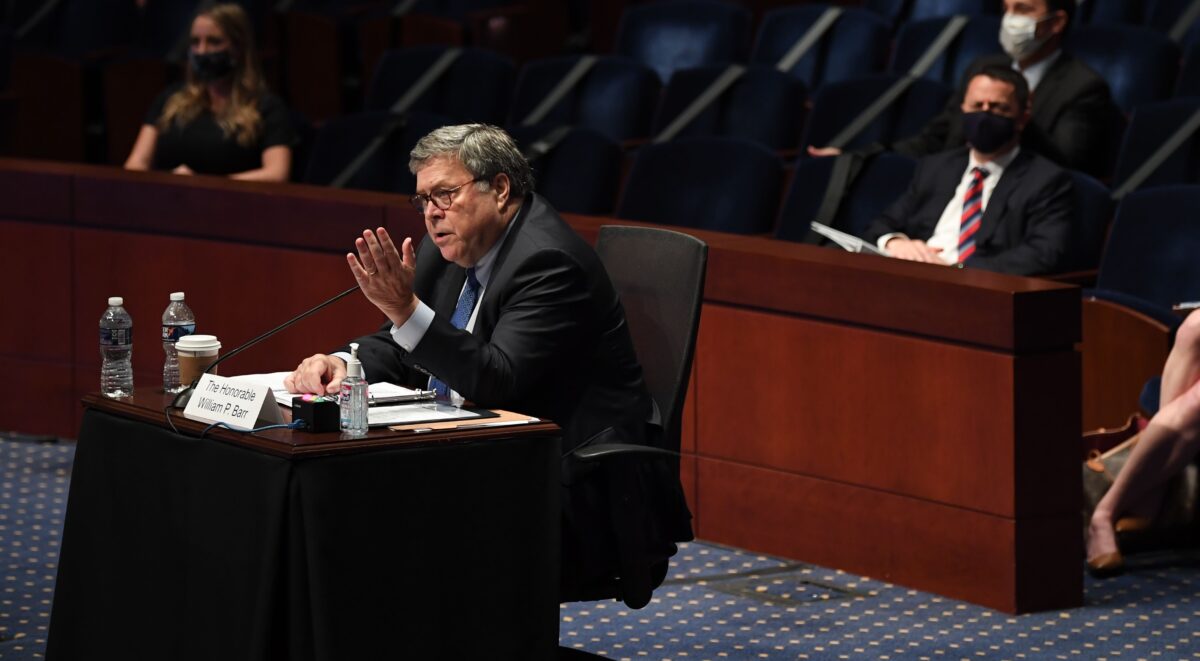 Attorney General William Barr on Aug. 9 defined Antifa as a revolutionary group intent on establishing socialism or communism in the United States.

Barr delivered a scathing critique of Antifa in an interview with Mark Levin on Fox News, noting that the group’s organization and tactics make it a difficult phenomenon to deal with.

“They are a revolutionary group that is interested in some form of socialism, communism. They are essentially bolsheviks. Their tactics are fascistic,” Barr said.

Barr made the comments in response to a question about Antifa’s apparent focus on removing the administration of President Donald Trump. He noted that the extremist group has been engaged with this goal since the first day of the Trump administration.

“They were trying to impeach him from day one. They have done everything they can. They have shredded the norms of our system to do what they can to drive him from office or to debilitate his administration, and I think that’s because of the desire for power,” Barr said.

“The left wants power because that is essentially their state of grace in their secular religion. They want to run people’s lives so they can design utopia for all of us. That’s what turns them on—it’s the lust for power.

“They weren’t expecting Trump’s victory and it outrages them,” he added.

Trump has said that the United States will declare Antifa a terrorist group, but the administration has not taken the formal step of doing so.

Barr had previously said that “the violence instigated and carried out by Antifa and other similar groups in connection with the rioting is domestic terrorism and will be treated accordingly.”

Antifa and other extremists groups hijacked peaceful protests in the wake of the police custody death of black American George Floyd. The extremists provoked violence, vandalism, and looting. Despite the apparently coordinated activity, the Department of Justice has been mum about whether the many arrests made since the riots began are focused on Antifa as an enterprise.

Barr explained that the group’s tactics make it a difficult phenomenon to deal with.

“It’s a new form of urban guerrilla warfare,” Barr said. “They are essentially shielding themselves or shrouding themselves in First Amendment activity. They go into the demonstrations, which are exercising First Amendment activity, and they insinuate themselves in there to shield themselves. That’s where they swim. And what they do is they hijack these demonstrations and they provoke violence and they have various tiers of people from the sort of top provocateurs down through the people who are their minions and sort of run the violent missions.”

“It’s a difficult phenomenon to deal with,” he added. “They’re highly organized at these demonstrations.”

Barr noted that legacy media outlets are lying to the American people by intentionally not showing the violence taking place at the riots.