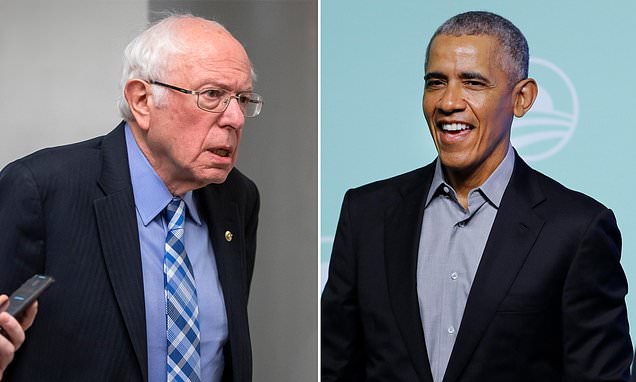 Obama 'thinks Bernie Sanders is unfit to be the Democrat nominee'

Obama, who has remained notably silent during the Democratic primary,…

Former President Barack Obama is growing concerned about avowed socialist Senator Bernie Sanders‘ rise in the primary polls, and may even speak out publicly against the Democratic candidate, according to a new report.

Obama, who has remained notably silent during the Democratic primary, could soon change that policy due to his concern over Sanders’ increasingly far-out leftist proposals, friends and associates of the ex-president tell Fox Business Network.

Obama has told people in private that Sanders is both temperamentally and politically unfit to beat President Donald Trump in the 2020 general election, these people say.

Adding to Obama’s reported concern is Sanders’ ‘strident’ and ‘confrontational’ approach to politics, and his track record of shunning compromise in the Senate, according to Fox Business.

Obama is said to be concerned that Sanders’ far-left proposals would alienate large segments of the Democratic base.

While it’s unclear what Sanders proposals Obama might specifically abhor, his ‘Medicare for All’ policy would dismantle Obama’s signature healthcare reforms, and according to some estimates would add $19 trillion to the national debt.

Other Sanders proposals include free college and student loan forgiveness, all funded by significant tax increases.

If Obama did speak out, it would be a sharp departure, in a campaign in which he has so far refused to endorse any candidate, including his former VP Joe Biden.