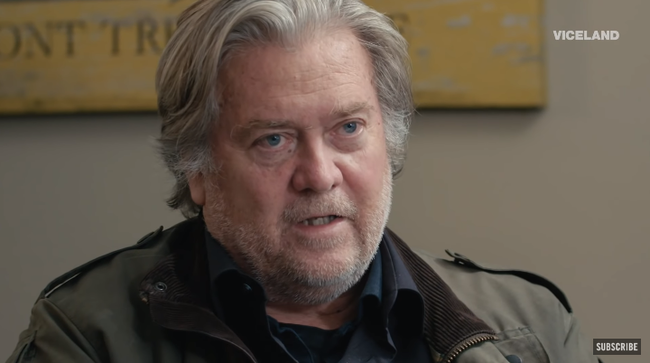 "...people around him were suspicious about his leaking, and that’s…

Former White House chief strategist Steve Bannon said in a Friday interview that in 2017, he was involved in an effort to remove alleged whistleblower Eric Ciaramella from the National Security Council over concerns about leaks.

“When I was in the White House there was a number of people in the National Security Council — the named individual eventually got let go, I believe because people were suspicious, not me, but other people around him were suspicious about his leaking, and that’s why he was let go,” Bannon told VICE in an interview which published Friday.

Bannon served in the White House until August 2017, while Ciaramella – who became former National Security Adviser H.R. McMaster’s personal aide in June 2017, was called out as a leaker by journalist Mike Cernovich that same month.

The whistleblower, who is reported to be a CIA analyst, filed a complaint on Aug. 12 accusing President Donald Trump of abusing his office in his dealings with Ukraine.

“I don’t think the individual naming of the whistleblower is important, although there was a story in The Washington Times … that tied me to the efforts to get, at least, the gentleman who was named out of the National Security Council,” said Bannon, who left the White House on Aug. 18, 2017.

“Is that true?” a VICE reporter asked Bannon.

“The individual that was named, absolutely true,” he replied. –Daily Caller