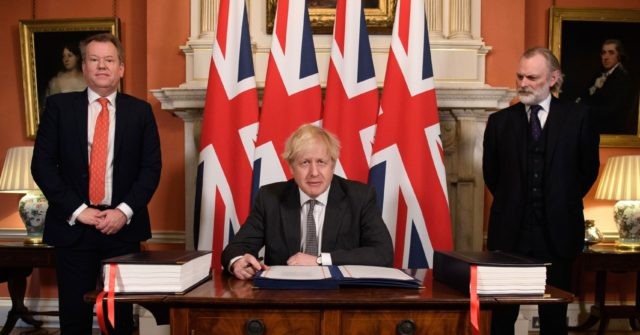 Parliament has ratified Boris Johnson's deal: the new treaty will be law when the country…

Both chambers of Britain’s Houses of Parliament have ratified Boris Johnson’s European Union trade deal, meaning the new treaty will be British law when the country ends the Brexit transition period on December 31st.

Boris Johnson’s EU trade deal passed the final stage late on Wednesday night, having passed back and forth between the Commons and the House of Lords — skipping the committee stage altogether — in near-record time. While Parliamentary bills, especially major ones, can take weeks and months to get through the scrutiny of the two Houses, the Parliamentary authorities pulled out all the stops to allow today’s Brexit bill to pass all stages in just one sitting day.

In all, the bill passed Parliament in just 13 hours.

Having received the final confirmation of the Houses, the bill will now go to Her Majesty the Queen, who will give it Royal Assent, the final constitutional stage which transforms the paper into British law.

Royal Assent was granted to the European Union (Future Relationship) Bill by Her Majesty the Queen a little after midnight, meaning the bill is now UK law. The deal is done.

Read more about the Brexit deal below:

The bill will now govern the future relationship between the United Kingdom and the European Union from the end of this year, the text having been agreed between British and European negotiators on Christmas Eve.

By signing this deal, we fulfill the sovereign wish of the British people to live under their own laws, made by their own elected Parliament. pic.twitter.com/FQDj1Nnqan

While the United Kingdom left the European Union in name at the start of 2020, there were very few practical changes, as the country remained tied to the bloc as a non-voting member through the so-called “transition” period, during which the trade deal was negotiated.

The United Kingdom will officially fully leave the European Union’s structures at the end of this week — but the new EU treaty devised by EU and Westminster negotiators has tried to make the withdrawal as unlike a full Brexit — known as a ‘no deal’ Brexit — as possible.

Indeed, for fishing, the transition period will continue for five-and-a-half more years, after France and other European coastal states lobbied hard against Britain being able to take back control of its own waters. While that extension will expire in 2026, it looks from the text of the deal as though it is quite possible the first so-called transition will be replaced by another, rather than British waters reverting to British fishermen, as many have been led to believe.

The deal passed the first stage earlier in the day with ease — an inevitability given the two major Westminster parties, the Conservatives and Labour, backed it — with only a handful voting against. Others abstained, marking their opposition to the text of the deal without actually opposing it — a simulacrum for supporting a no-deal Brexit, an outcome hated by almost all in Westminster.

Former Labour leader — now expelled from the Parliamentary party over Labour’s ongoing reckoning with antisemitism under his leadership — Jeremy Corbyn abstained on the bill, but his successor Keir Starmer gave it qualified support.

Making clear he was not happy with Boris Johnson’s deal but nevertheless voting for it in preference to no-deal — a position distancing himself from the agreement — Starmer said: “A thin deal is better than no deal, and not implementing this deal would mean immediate tariffs and quotas with the EU which would push up prices and drive businesses to the wall… leaving without a deal would also show the UK is not capable of agreeing the legal basis for the future relationship with our EU partners.

“…[I]t’s imperfect, it’s thin, and it’s the consequence of the prime minister’s political choices, but we only have one day before the end of the transition period, and it is the only deal that we have. It is a basis to build on in the years to come, and ultimately voting for this treaty is the only way to prevent no-deal.”

The bill then went to the House of Lords. The unusually short time allotted to Parliamentarians to scrutinise the Brexit bill — not an inconsiderable document at 1,200 pages — was a frequent comlaint among those broadly against it. One Liberal Democrat peer railed against the process, noting that the House of Lords’ involvement in the process was purely that of a “rubber stamp” exercise, calling it an outrage against Britain’s unwritten constitution.

While the deal has now passed — and convincingly — through Parliament, it remains the case that several key Brexit stakeholders have raised doubts about the treaty, including the Conservative Party’s own internal Eurosceptic faction the European Research Group (ERG), the veteran conservative think tank the Bow Group, and 30-year Brexit leader Nigel Farage himself.

While the government had repeatedly insisted that no deal would be better than a bad deal — an idea dismissed by Mr Farage as nothing more than a negotiating position and never a serious idea — many Conservative Brexiteers today voted for a deal they clearly had reservations about.

Chairman of the Bow Group, Ben Harris-Quinney, told Breitbart London that Tory MPs may have in fact now decided that a bad deal is better than no deal — a reversal of months of government claims — at this late stage. He said: “Theresa May was forced out of office on the basis her Brexit deal was unsatisfactory. Since then, we have consistently heard from the government that no deal is better than a bad deal.

“I don’t believe the government ever had any intention of opting for no-deal however, and clearly the EU didn’t believe they did either. They have contrarily opted for a policy of any deal being better than no deal.

“The Bow Group has today released 10 points of serious concern with this deal, and we believe over time these concerns will become apparent to all.”

Among the concerns raised by the conservative Bow Group, which at one time — and particularly during the Thatcher years — was very close to the Conservatives, but which has watched the party drift leftwards in recent years — was a lack of time devoted to scrutinizing the bill, and the fact it will likely lead to an increase, rather than a decrease, in net immigration.

Dr Jon Stanley, a senior research fellow at the Bow Group, said far from the Brexit fight being over — as some have said in response to the Boris deal — the new treaty is inadequate and unstable, and will “require revision as the political reality becomes apparent”.

Far from Brexiteers being able to lay down arms, the war won, this time for Eurosceptics to regroup “should not be wasted”, he said.

‘No Deal Is Better Than a Bad Deal’: Farage Predicts Boris Will ‘Sell Out’ Brexit, as Crunch Talks Are ‘Paused’ https://t.co/0jKc1T8gzd