‘Anonymous’ author taunts Donald Trump and warns president ‘will hear from me, in my own name’ before 2020 election—and reboots guessing game by saying Navy will beat Army in football rivalry game 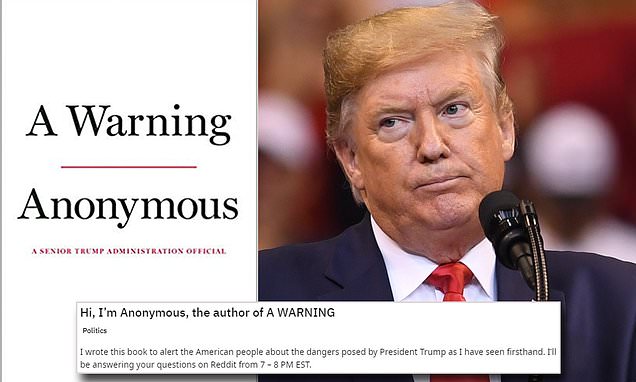 'Anonymous' taunts Trump: President 'will hear from me in my own name'

The Anonymous author of ‘A Warning’ used an ‘ask me anything’ post on Reddit that revealed the writer will directly confront Donald Trump before the 2020 presidential elections.

‘Trump will hear from me, in my own name, before the 2020 election,’ Anonymous responded on Reddit when a user accused the author of having ‘so little integrity’ not to ‘come out publicly and speak.’

On Tuesday night, the author answered questioned for a full hour on Reddit.

‘I wrote this book to alert the American people about the dangers posed by President Trump as I have seen firsthand,’ Anonymous posted to the subreddit IAmA.

A link to Amazon’s page where ‘A Warning’ can be purchased was included in the Reddit post, as well as a link to the book’s publisher, 12 Books’ tweet confirming Anonymous would be answering questions on Reddit.

On the post, a moderator admitted Reddit wasn’t able to verify the original poster – or OP – by its usual standards, but said publishers of ‘A Warning’ assure them ‘it’s the same guy and we have no reason not to believe them.’

While there were plenty of clues of Anonymous’s identity in the Q&A, the mysterious power player’s name was still not revealed.

On user simply asked: ‘Will Navy beat Army this year?’

Anonymous also authored a New York Times op-ed last September detailing a resistance within the Trump administration, using the word ‘lodestar’ in the piece – sparking speculation over who the writer is.

Lodestar either refers to a star used to guide a ship’s course or something that serves as inspiration.

The definition could indicate the author is someone within the Defense Department, which a New Republic writer suggested in a Monday report of a former Navy commander who went to serve in the Pentagon under Trump’s administration.

Backing Navy in the Army-Navy game would add credence to that theory.

But others at the time of op-ed’s publication thought the use of ‘lodestar’ led the trail back to Vice President Mike Pence, who often uses the uncommon word.

It appeared Anonymous was playing with those trying to guess the identity, because the word ‘lodestar’ was used in one response, even though Pence has vehemently denied that he is the author described only as a ‘senior official’ in the Trump administration.