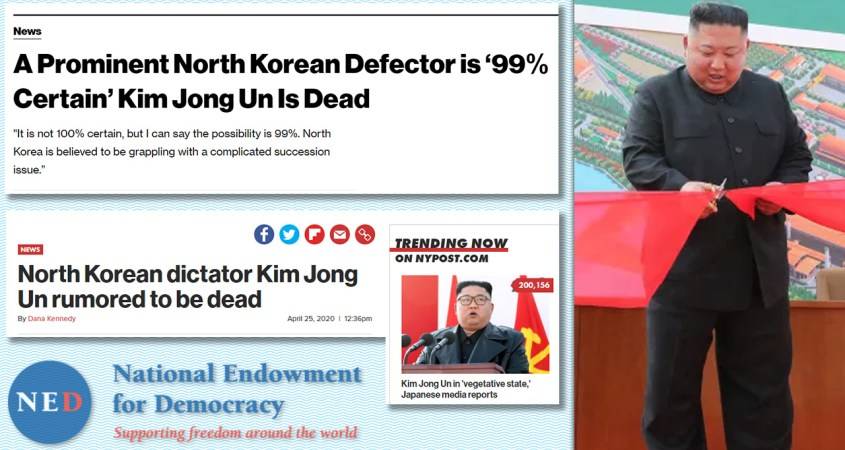 There may be no other country on Earth lied about…

There may be no other country on Earth lied about more than North Korea. Western corporate media outlets have absolutely zero editorial standards when reporting on the country.

Absurd lies are routinely treated as newsworthy stories, from the cartoonish claim that Kim Jong-un executed his uncle by feeding him to pack of starving dogs (fake news), to the notion that all North Koreans are drones forced to choose from state-mandated haircuts (racist-tinged fake news), to the assertion that state media swore it uncovered a unicorn lair (insanely stupid fake news based on a mistranslation).

But these lies are not just innocuous errors that come out of nowhere; they are part of an insidious pattern, and a decidedly political one. They are a form of information warfare aimed at destabilizing North Korea’s government, known officially as the Democratic People’s Republic of Korea (DPRK), which has an independent foreign policy and geo-strategic location — and just so happens to be sitting on trillions of dollars worth of mineral wealth.

Many of these fake news stories originate with Korean opposition groups that are funded to the hilt by the US government’s National Endowment for Democracy (NED), a CIA cutout created by the Ronald Reagan administration to push regime change against foreign countries that don’t sufficiently kowtow to Washington.

The Grayzone editor Max Blumenthal published a documentary demonstrating how the NED bankrolls a global network of regime-change activists, whose unsubstantiated accusations against the DPRK, China, Russia, Venezuela, Nicaragua, Iran, and other nations targeted by the US are spun into unquestionable truths. North Korean defectors are a particularly unreliable source of information, and many of their claims have been proven to be false. They are highly incentivized, however, with offers of nearly $1 million to continue cranking out the disinformation.

This April, we saw another textbook example of how NED-backed South Korean outlets notorious for spreading fake news are amplified by the international press corps to the point that their deceptions dominate the news cycle for days.

For nearly two weeks, dozens of major news networks across the globe provided a megaphone to unsubstantiated rumors that North Korean leader Kim Jong-un was dead.

The disinformation campaign kicked off on April 20, when a little-known US government-backed media publication called the Daily NK ran a report claiming North Korean leader Kim Jong-un had just undergone heart surgery and was in bad health.

This story was later expanded into a shocking claim: Kim had died, at the young age of 36.

The Daily NK followed up with an article stating that a video confirming that the supreme leader was dead had been going viral inside North Korea.

These reports unleashed a firestorm. Dozens of media outlets across the globe published story after story claiming Kim was either dead or incapacitated after a botched surgery.

The anatomy of this fake news campaign is dissected below.

And it all began with the Daily NK. But what exactly is this obscure publication?

The Daily NK is a South Korea-based propaganda outlet funded by Washington to conduct information warfare against the government in the north. It was founded by anti-DPRK activists who coalesced around the Network for North Korean Democracy and Human Rights.

This network has received millions of dollars in grants from the National Endowment for Democracy, the CIA cutout.

NED funding for the Daily NK itself goes back well over a decade, to when it was founded. A search of the NED grants database shows that the Daily NK received $400,000 in US government funding in 2019 alone, and at least $1.2 million in American tax dollars between 2016 and 2019.

Ho Park, the head of North Korean research at Daily NK and one of the publication’s co-founders, is a grantee who has been publicly honored by the NED.

The US-backed Network for North Korean Democracy and Human Rights is also linked to another major grantee called the Unification Media Group, which was given at least $2.4 million from the NED between 2016 and 2019.

The NED notes on its website that the South-Korea based Unification Media Group consists of the Daily NK, Radio Free Chosun, and Open North Korea Radio.

In other words, the US government has over the course of several decades carefully cultivated a cadre of anti-DPRK propaganda outlets in Seoul, using them to grease the wheels of a disinformation machine that regularly spreads fake news and rumors from North Korean defectors. This media apparatus is the spearhead of the US government’s campaign of hybrid warfare against the DPRK.

Anatomy of a fake news campaign

Birthed from the belly of the US-funded disinformation network in Seoul, the global press corps enthusiastically adopted the fake news and delivered it to the Western public.

The New York Post followed with a stunning headline: “North Korean dictator Kim Jong Un rumored to be dead.” (Like many other outlets, the Post later edited this headline, as it became clear that the story was unconfirmed, but the original titles of many of these false reports can be seen in their URLs or through internet archives.)

The New York Post based its claims on a report from a Hong Kong broadcast network (later identified as HKSTV – Hong Kong Satellite Television), which claimed it had a “very solid source” that Kim was dead.

The Post also amplified an article in a Japanese magazine insisting the North Korean leader was in a “vegetative state.” It even claimed that “senior Community Party sources in Beijing” had confirmed the rumor that Kim died in a botched surgery.

After the New York Post article, the fake news spread like wildfire through tabloids from TMZ to the Daily Express, to Metro, to The Sun (UK), to the Toronto Sun, to the Irish Post, and finally, The Mirror.

It was then picked up by numerous local media networks in the United States and other countries.

Neoconservative American politicians pounced on the rumors in predictable fashion. Republican Lindsey Graham, the most fanatically militaristic member of the Senate since the death of his friend John McCain, told Fox News with an air of confidence, “I pretty well believe he [Kim] is dead or incapacitated.”

Graham continued, “I’d be shocked if he’s not dead or in some incapacitated state, because you don’t let rumors like this go forever or go unanswered in a closed society, which is really a cult, not a country, called North Korea.”

Americans’ gut instincts that the fake news just “feels true,” after decades of consuming a steady diet of loony regime-change rumors, was taken as proof that it must be true.

On Twitter, the hashtag #KimJongunDead went viral as well, and millions of users swallowed the fake news whole.

Next, a photoshopped picture went viral on social media purporting to show Kim dead in a glass coffin. The image was reported on by Western media outlets like The Sun, a tabloid owned by the same right-wing Rupert Murdoch-owned media group that controls the New York Post.

As the fake news spread across the media ecosystem, Western journalists and professional Korea watchers began mulling the possibility that the presumably dead North Korean leader’s sister, Kim Yo-jong, was being groomed to replace him.

Without any solid evidence, dozens of outlets ran stories confidently asserting that Yo-jong was preparing to take her brother’s place. The Daily Beast even published a piece purporting to explain why she is so “feared” in the country.

The Washington Post printed an op-ed by Jung H. Pak, a former senior analyst at the CIA and senior fellow at the Brookings Institution, with the title, “Why we shouldn’t rule out a woman as North Korea’s next leader.”

The Guardian, Foreign Policy, the BBC, the New Yorker, TIME, Deutsche Welle, The Australian, and Newsweek all added to the baseless speculation.

While some of these outlets amplified the phony story while feigning a tone of skepticism, VICE News threw all caution out the window. The “hipster arm of the empire” published an article trumpeting, “A Prominent North Korean Defector is ‘99% Certain’ Kim Jong Un Is Dead.” Its source was a defector trained and funded by the NED.

Days before, the US government-funded Daily NK had also praised VICE for producing a slick documentary that effectively amounts to fawning PR for the disinformation outlet, in a perfect circle of propaganda.

For more on what Daily NK does, check out a short documentary by VICE NEWS on the organization – including an interview with Editor-in-Chief Lee Sang Yong. https://t.co/duipZm3925

Yet another “dead” foreign bogeyman shows up on TV

Then on May 1 – the same day VICE News claimed there was a 99 percent chance Kim was dead – the house of cards came crumbling down, as DPRK state media published photos of the leader cutting a ribbon at a fertilizer plant.

Another US regime media fail https://t.co/AeyNBEfDXg

Now that it is indisputable that the rumors they amplified were totally unfounded, some of the aforementioned news outlets have scrambled to edit their headlines and leads to soften the language, noting there was still confusion at the time. But archived links do not lie.

And the fact of the matter is it was apparent from the beginning, to anyone with a brain, and the capacity to think critically outside of the corporate media bubble, that the rumors should not be trusted.

Actual experts, or even just expats in Korea who tweet in English, could tell from the get-go that this campaign was bogus.

In 2019 alone, Unification Media Group and its Daily NK affiliate took in $1,000,000 from US taxpayers via @NEDemocracy.

To stay on the gravy train, they must deliver sensational "scoops" for the Empire. When their sources are compromised, we Americans have a hand in their fate. https://t.co/psSke2VUHe pic.twitter.com/6agF1Y1ZZk

Critics also pointed out out that “Hyangsan Hospital – the hospital where Daily NK said Kim had undergone heart surgery – ‘is similar to a community clinic and isn’t a facility where operations or surgeries can be performed.’”

Why I was right about Kim Jong-un:

1. Daily NK isn't a reliable source.
2. Kim was seen walking in Wonsan between April 15th and 20th.
3. There was no buildup of PRC troops along the DPRK border.
4. Hyangsan Hospital is unequipped for surgical operations.
5. I'm unowned.

But one didn’t need to be a Korea specialist to recognize the pattern of disinformation. Anyone who is even mildly familiar with the practically non-existent standards of media reporting on North Korea knows how these fake news cycles work, and knew not to jump to conclusions.

In a refreshing albeit rare example of cautious skepticism, the media watchdog Fairness In Accuracy and Reporting (FAIR) called out corporate media outlets for spreading these rumors without any solid evidence, even before Kim appeared on state TV.

And while impressionable Western journalists were heavily circulating the fake news, South Korea’s government made it clear, “Kim Jong Un is alive and well. He has been staying in the Wonsan area since April 13. No suspicious movements have so far been detected.”

Chinese media outlets also emphasized from the beginning of the disinformation campaign that it was clearly false. But their insistence was dismissed as “Chinese propaganda.”

This was not even the first time that rumors went viral claiming Kim Jong-un had died. Back in 2012, a strikingly similar similar fake news frenzy erupted when social media posts alleging Kim had passed away were momentarily amplified by mainstream outlets.

The latest paroxysm of propaganda was hardly the only regime-change disinformation campaign blown out of the water in recent weeks. In April, The Grayzone documented the wave of bogus corporate media stories claiming Nicaraguan President Daniel Ortega was dead – before he, too, appeared on TV very much alive.