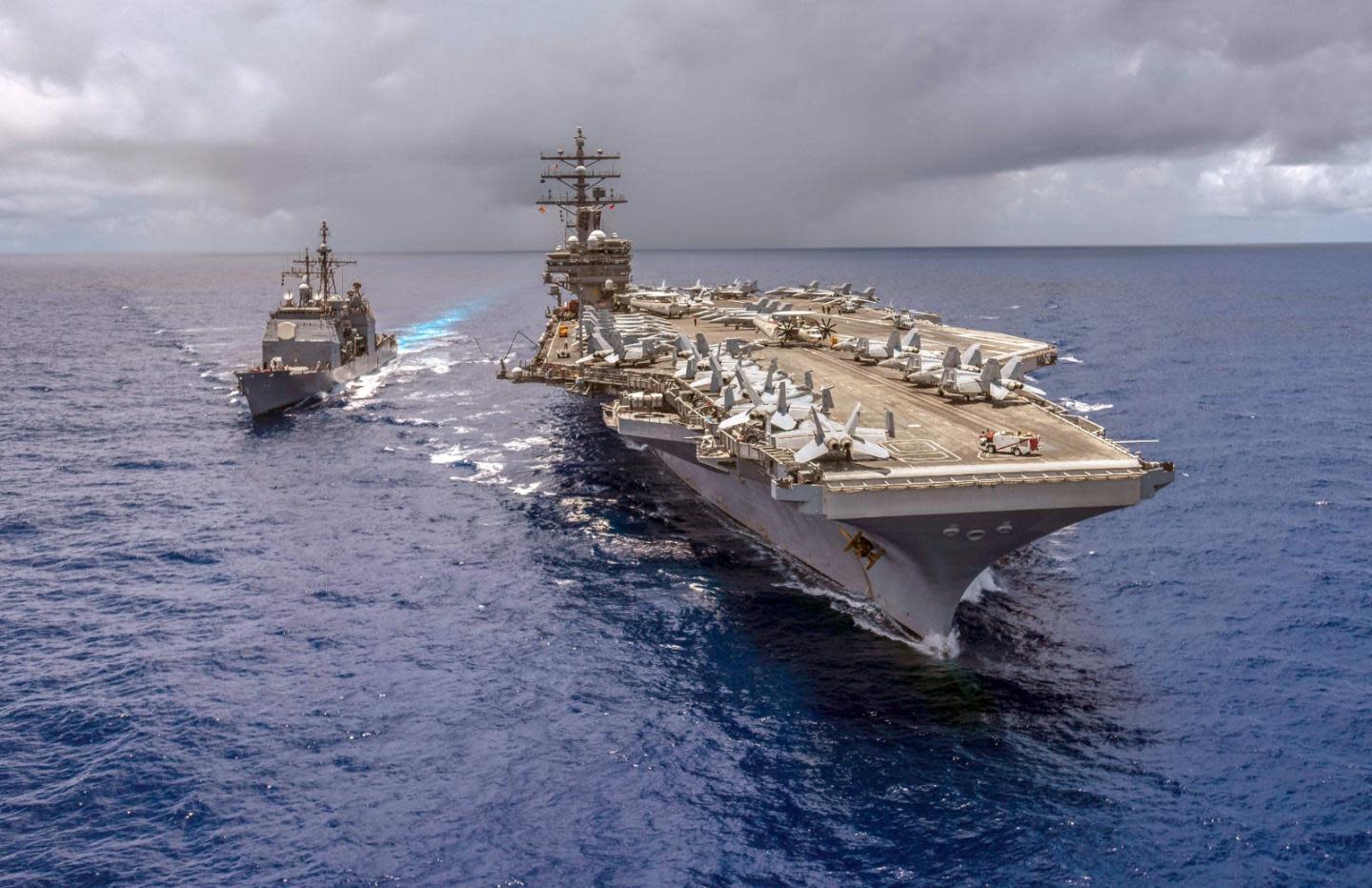 Is leasing an option?

Key point: In some ways, leasing British warships to America would revive an old relationship.

To offset a shrinking defense budget, the British military is considering whether to lease a carrier to the Americans, according to British media. The instigator of the scheme? The British Army, which considers carriers to be expensive floating targets. So if the budget demands sacrifices, let it fall on the Royal Navy.

“The army hates aircraft carriers, which they have always seen as a white elephant, but the Americans love them,” a government official told the British press. “They are cutting edge because they can operate with far fewer crew than U.S. carriers.”

Once leaders in carrier aviation during World War II, Britain’s last aircraft carrier was scrapped in 2016. But Britain’s carrier force is now back, with HMS Queen Elizabeth scheduled for its first deployment in 2021, followed by the Prince of Wales.  Each of the nearly $8 billion vessels can carry up to 36 F-35Bs, the naval short-takeoff and vertical landing variant of the U.S. F-35 stealth fighter also flown by the U.S. Navy. At 65,000 tons each, the gas-turbine Queen Elizabeths are smaller than America’s 100,000-ton Ford-class nuclear-powered carriers, but are also highly automated. The British ships have a crew of about 800 sailors, not counting the carrier’s air wing, compared to 2,600 for a Ford-class vessel.

The Royal Navy is pushing hard to integrate its carriers with their U.S. counterparts. “As she has demonstrated already, we can successfully field a combined U.S., U.K. carrier strike group,” said Admiral Tony Radakin, Chief of Naval Staff, during HMS Queen Elizabeth’s visit to the U.S. East Coast this month. “I look forward to this developing further, moving to the point where we are not only talking about interoperability, but we are looking for interchangeability. ”

But just how interchangeable would a British carrier be in the U.S. Navy, which has different equipment, policies and traditions than their British counterparts? “I’m not aware of any recent precedent for the U.S. Navy leasing combatant ships from other navies, and there would be difficulties that begin with the challenge of providing logistics support from two completely different logistics systems,” Bradley Martin, a naval expert for the U.S.-based RAND Corp. thinktank, told the National Interest. “The aircraft support and maintenance have common items between the U.S. and UK, but the ships are in a different world.  I also have a hard time thinking that the manning could be anything but U.S. Navy manning.  The U.S. NCA [national command authority] ordering British citizens into harm’s way based solely on a leasing arrangement seems unlikely, and if the U.S. is to man it, the U.S. Navy already has problems manning all its at-sea billets.”

“From the U.S. Navy, the idea doesn’t really make sense,” Bryan Clark, a naval expert with the Washington-based Center for Strategic and Budgetary Assessments thinktank, told the National Interest. “ The U.S. already has 10 larger carriers and 10 carriers – LHA and LHD amphibious assault ships — that are slightly smaller than the Queen Elizabeth class. The U.S. Navy is increasingly using LHAs and Ds in places like the Middle East in place of a larger CVN [nuclear-powered carrier] to support counter-terrorism operations with F-35Bs. And the U.S. Navy has operations and maintenance cost challenges of its own, so is unlikely to want to pay to lease another ship from those funds.”

In addition, the lease arrangement could leave the Royal Navy without an operational carrier. “Initially, the Royal Navy planned to only operate one carrier at a time, and swap part of the crew between ships,” he told the National Interest. “When one went in for maintenance, the other would deploy and the crew, or their billets, would be transferred to it. Although that approach would not save the maintenance and operations costs of having two carriers, it could yield manpower savings and manpower that is likely the fastest-growing part of the Royal Navy’s expenses. Leasing a carrier to the U.S. Navy could bring in revenue to help pay for carrier upkeep and operations, but presumably the Royal Navy will eventually have the carriers operating in alternating cycles – when one is in maintenance the other is operational. As a result, if one is leased to the U.S. Navy, the RN will be without an operational carrier for up to a year when the carrier they keep goes into the shipyard.”

In some ways, leasing British warships to America would revive an old relationship. During World War II, Britain received billions in Lend-Lease aid, including the 1940 deal in which 50 American destroyers were loaned to the hard-pressed Royal Navy in return for the right to establish U.S. naval bases on British overseas territories. The destroyers were old and of negligible value against Nazi U-boats, but to a Britain standing alone against Hitler in the autumn of 1940, they felt like a lifesaver.

Clark actually suggests a reverse arrangement where the Royal Navy’s two carriers alternate deployment and maintenance periods, but then embark U.S. Navy and Marine Corps planes and crews on the deployed carrier. “This could reduce the number of Royal Navy personnel deploying on the ships, give U.S. personnel additional operational opportunities when their ships are in maintenance, and promote alliance interoperability.”

Martin sees the idea of leasing a British carrier as having merit, but not enough merit. “This is not a wholly fanciful proposal in the sense that the U.S. could use aircraft carriers less capable than CVNs but still highly capable in some scenarios. And, leasing a ship is likely cheaper than building a new one.  But it’s unprecedented and I think likely difficult to execute from a sustainment perspective.”