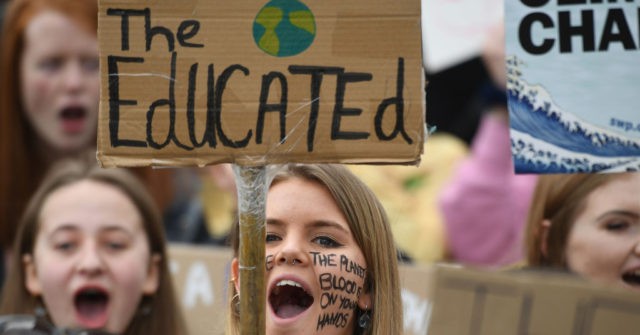 Climate change alarmists are pushing for a change in vocabulary to scare people into taking global warming more seriously, starting with terms like “global meltdown” and “climate collapse.”

Writing for AdAge this week, Aaron Hall argues that in order to get people to “take action” against climate change, “rebranding” is crucial, since people have gotten too used to the idea that climate is changing and need to be shocked into the notion that the world as we know it is ending.

“Is there a better way to convey the urgency of the situation, while also encouraging folks to take action? Could the tools of branding and brand naming create a more resonant, powerful name?” Mr. Hall asks.

What he and his marketing team came up with was a series of much more frightening labels to stick on climate change in the hope of jolting people into meaningful engagement.

The terms “Global Meltdown” or “Global Melting,” for instance, deliver a more negative image than mere “Global Warming,” he contends. “The names signal that ice caps are melting, but also create a more visceral image in the mind — that real feeling of ‘melting’ when it’s too hot outside. A meltdown is a disastrous event that draws from the ultimate terror of a nuclear meltdown, an apt metaphor for global destruction.”

“Climate Collapse” and “Climate Chaos,” on the other hand, “instill a clear message or even a direct call to action,” Hall notes, adding that “there’s nothing neutral about collapse or chaos.”

To up the rhetoric even more, Hall proposes the weaponized term “Scorched Earth.”

“Sometimes a brand name needs to be hyperbolic to truly capture hearts and minds. If we don’t take massive action now, Earth will be uninhabitable — an irreversible barren wasteland,” he insists. “‘Scorched Earth’ paints the direst picture of what’s to come and what we must avoid and is likely the edgiest brand name from our exploration.”

“Whatever we call it, impending climate doom is upon us if we don’t act quickly,” Hall concludes. “Perhaps a new name will shift the needle, even if just a little.”

Mr. Hall’s contention that it does not matter if what is said is true as long as it elicits the necessary response is reminiscent of similar assertions by leaders of the Extinction Rebellion (XR) movement.

Spokespersons of the movement have acknowledged that their claims that billions of people are going to die from climate change have no basis whatsoever in scientific fact but are necessary to provoke the kind of response that is needed to cut back on greenhouse gas emissions.

Pressed last month on what the basis was for predictions of mass deaths, XR spokesperson Zion Lights acknowledged there is no real ground for these predictions, but contended that such incendiary language is necessary to motivate people, confessing that “alarmist language works.”

While it is clearly true that “alarmist language works” in some cases, it is also true that people tend to resent being lied to and manipulated.

Like Aesop’s fable of the Boy Who Cried Wolf, climate alarmists may wake up one fine day to find that nobody believes them anymore.

Such is the price of lying.

Voices from the other side – John B Wells Live