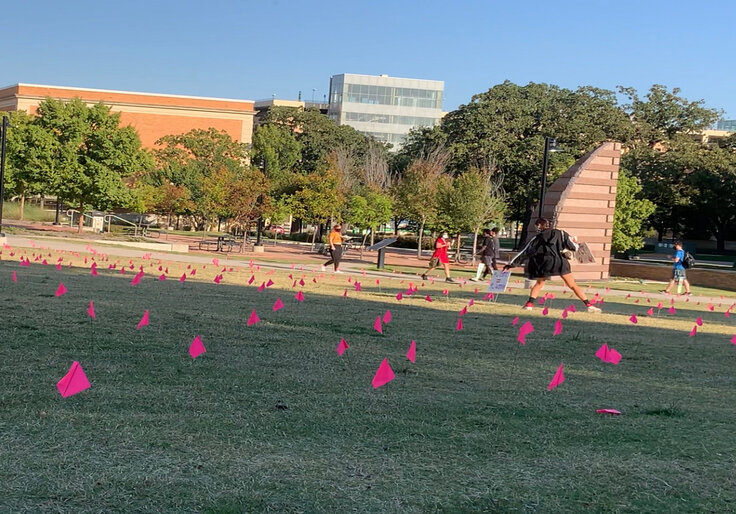 Activists at the University of North Texas staged a game of capture the flag to vandalize a pro-life memorial for the unborn.

The Young Conservatives of Texas (YCT) held its first-ever Memorial for the Unborn—a dedication to the lives lost to abortion and miscarriage built entirely out of flags—only for it to be torn up by pro-abortion activists. Freshman Dale Bautista, who goes by the online name “I cried having sex,” called on students to play capture the flag with flags from the memorial. The activist tapped three other left-wing students—one of whom identifies as an Antifa member—to act as team captains for the game.

In video footage obtained exclusively by the Washington Free Beacon, activists can be seen ripping flags out of the ground. In one video, a stand-alone activist jumps with glee after capturing a single flag.

YCT president Kelly Neidert told the Free Beacon that activists showed up to take down the flags within an hour of the memorial’s completion. Though she called campus police after repeated confrontations with the activists, law enforcement did not arrive until after the capture the flag game was underway.

“We alerted campus police earlier in the day, but it took them 30 minutes to show up after we called them twice,” Neidert said. “They did issue a citation for one student who stole 180 flags, but aside from that, there were no ramifications for the students.”

Bautista, the game’s ringleader, told the Free Beacon he initially called on students to steal flags because he believed YCT had flouted COVID social distancing and mask-wearing guidelines, not because of its pro-life stance. Bautista claims that the university has told student groups they cannot meet in person and said he was “infuriated” that YCT members did not wear masks at all times.

“The reason I did this is not necessarily for the reason of going against abortion, but for the reason of social distancing and COVID,” Bautista said. “I want COVID regulations to be strict with club meetings, and I can’t stand by and watch them break enough rules and try to justify it.”

The university had approved the memorial, and YCT members reportedly wore masks when they could not adequately social distance.

Another video shows a male student holding a handful of flags while condemning female YCT members for not “allowing” him to have a choice in a woman’s abortion.

“We should let women choose. But no, you don’t let them choose, you just do all this dumb s—t and then decide that I can’t have a choice either. I don’t have a say, but okay,” the student said.

Pro-life students have routinely seen their memorials for the unborn destroyed. At Marquette University, an abortion advocacy group vandalized a pro-life memorial three times. Activists at Miami University in Ohio vandalized a Cemetery of the Innocent display three times as well. Earlier this year, the Young America’s Foundation group at the University of Florida caught and recorded students who destroyed their pro-life memorial.

Following YCT’s event, pro-abortion students created a donation fund for Planned Parenthood that they plan to make in the conservative group’s name. One student posted her Venmo information and encouraged students to contribute to YCT’s fake Planned Parenthood donation. According to recent tweets, the students raised $35.

YCT’s executive director Madison Mills told the Free Beacon she was “appalled” that students would try to donate to Planned Parenthood on the group’s behalf.

“These people are taking time out of their day to try and ruin someone else’s,” she said. “I honestly thought about contacting Planned Parenthood and telling them that the donation under our name was not from us… I can tell you that if the tables were turned we would never do [this].”