A TALE OF TWO HEROES 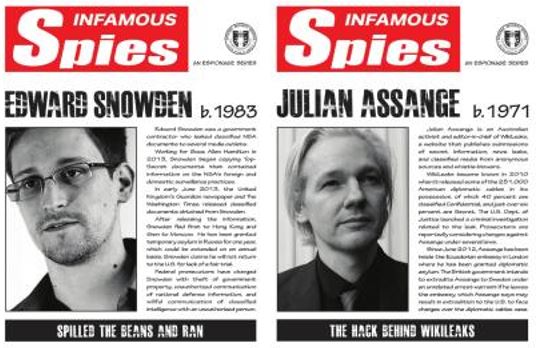 A TALE OF TWO HEROES

Snowden and Assange blew the whistle on deep state corruption…

The Deep State Version of Events

The term ‘Deep State’ did not exist beyond a handful of Conspiracy Theorists when these two men, Eric Snowden and Julian Assange took the globe and shook it from its slumber.

“Wake up!” they shouted to us all. “You are not free people! Look!” and they showed us we were little more than lab rats.

We are under constant observation by secret U.S. agencies illegally spying on and collecting data from every soul on the planet.  Not just some data – all of it.

Within nanoseconds of their information dumps proving these things, the Deep State criminals they exposed started ripping their lives apart, inventing crimes and tales that were not only unlikely but impossible.

Assange, for example, was immediately accused of rape (these charges were found to be fraudulent by a Swedish court and dropped only yesterday).

Meanwhile, Snowden was disowned by his nation and corrupt President (Obama) and left nowhere to flee but Russia. This, of course, improved the NSA and CIA’s hastily contrived narrative.

So, What Really Happened?

They failed to mention that Mr. Snowden was already on a plane to Moscow from Hong Kong for a layover at Sheremetyevo Airport in 2013 when the Obama State Department cancelled his passport, mid-flight.

He and Wikileaks’ advisor, Sarah Harrison – who came to Hong Kong to rescue him after he fled the U.S. – were detained by the FSB (Russia’s FBI, but perhaps less corrupt) which offered him a job.

To Mr. Snowden’s credit – he rejected that and all future ‘offers’.

Snowden’s attorney in Russia, Anatoly Kucherena, told TASS (Russian News Agency) that Mr. Snowden refused to cooperate with Russian intelligence agents, and by refusing, his life has been less than pleasant ever since.

Wouldn’t it be sweet justice if Eric Snowden were invited home and tasked by President Trump with dismantling the spy programs he helped create as his ‘punishment’?

While this real ‘Whistleblower’, Edward Snowden, is being harassed and chased by CIA hacks, the same Deep State operatives he exposed are doing their best to take down a duly elected President in his Homeland.

So, why is Eric Snowden still in Russia?

The same reason I’m still in Poland. When corrupt U.S. officials are after you for telling the truth about what they do, it’s a grand idea to seek a place that still has a rule of law – such as Eastern Europe today.

Sadly, this is one of the few places that still have it.

As crazy as it sounds, Snowden says Russia is the only country with a foreign policy which is independent enough to shelter him.

I disagree with that; but only because I would add Poland. This country sheltered me and gave me permanent residency when I had to flee under threat of re-imprisonment by the Obama cult.

They did this simply because I was writing and speaking the truth about their system of ‘justice’.

My story is no secret as I’ve written 8 books, including Gułag Amerika in Polish telling all that happened to me. My story was also made into a short documentary (Justice Denied below) yet they let me stay – permanently.

But that’s why I consider Julian Assange and Eric Snowden to be my brothers.

They were not imprisoned for years without being convicted by any court of jurisdiction like me, but they will be eventually unless President Trump does the right thing by them.

Why Trump was Elected

Exposing the Deep State that is undermining everyone’s lives prompted the cry for a complete ‘outsider’ to come to Washington and drain the Swamp.

Enter one Donald J. Trump, who surprised everyone – except the 63 million of us who voted for him.

That is why I say, that without Snowden and Assange waking us up, Donald Trump would never have become President.

Snowden and Assange were right, Mr. President, which is why we elected you instead of Queen HRC

These unconstitutional agencies need to be defunded and euthanised. They almost took you down, Mr. President, and may still kill you.

Yes.  I know they tried to poison you just last Saturday, prompting that visit to Walter Reed Hospital, but they will not stop, Sir. You must shut down the Deep State before they succeed in taking you out.

That’s also why we chose you to destroy this Deep State – though we appreciate the fact that you did not need this job. Snowden and Assange are the two people who could help you finish it.

Julian Assange, can set the record straight for you, Mr. President

He is the one who knows that the the Democrat National Committee e-mails published by his Wikileaks Group were not hacked by Russians.

He also knows that they were not hacked by Republicans, so please keep him alive and safe from the Deep Staters.

In fact, you should pardon him of any allegations and invite him to America to be your Czar of Transparency.

He can help you dismantle the Shadow Government working to destroy you, by putting everything they have done out for the public to see.

He can expose these people and show that it was not you, your people, or even ‘the Russians’ (as the FBI co-conspirators have claimed), who hacked the DNC – it was an inside job.

It was just 49.1 megabytes downloaded onto a USB flashdrive. The speed of the download has confirmed this. The information was not hacked from outside. That means that it was downloaded by someone working there – and I think we all know who.

Seth Rich Turned on Hillary – Just before his Unexpected Murder

Seth was very angry that the Clintons took over the DNC’s finances and intentionally starved his candidate, Bernie Saunders, out of the race.

And why did the FBI not even look at the server before making their outrageous claim that it was ‘the Russians’? They let ‘Crowdstrike’ take the servers and now they’re in Ukraine

The police called Seth Rich’s murder ‘a robbery gone wrong’ but isn’t it odd that the thief did not take anything after executing him – from behind?

Assange knows – and after Seth’s murder, he publicly stated – that it was not Russia, or in fact any government, but rather an individual working at the DNC who provided Wikileaks with the thumb drive.

But we will never know, because the FBI let their comrades at the Democrat National Committee hide the server with a private company, Crowdstrike. They didn’t even do a rudimentary investigation of the server and the ‘hack’ – or the murder.

So, who the hell is this Crowdstrike?

Well at least there you can find a Russian – the guy above, Dmitri Alperovitch. He is also a Senior Fellow at the infamous Left-leaning Atlantic Council with close ties to the Clintons; Ukraine billionaire, Viktor Pinchuk, and other sleazy characters with deep ties to (or actual members of) the Deep State.

So, the server is flown out of the country to Dmitri Alperovitch’s Eastern European hideaway. How handy is that?

But we know that this is a wholly false narrative intended to be part of the story to take down Donald Trump.

It was revealed by Julian Assange – the man who received the DNC e-mails from its Chairman, John Podesta, and the Queen herself, Hillary Clinton.

And unless FBI Director, James Comey, was braindead and/or part of the scam, why would he

1) allow a private Russian contractor with the Atlantic Council to investigate the ‘hack’ of America’s largest political party instead of the FBI, and

2) let that evidence then fly off to be hidden in Ukraine?

I think the questions answer themselves.

It’s men like these who can help you dissemble the rogues who are destroying America and undermining your Presidency, Sir.

Imagine the sheer panic that would ensue in the Swamp just by pardoning Assange and Snowden!

And think how many others might bring illegal government activity to light if you showed that you are on the side of law and transparency!

It’s the right thing to do, Mr. President!  Let my people go, then harness their brilliance to help you finish off the deep state!

The International Centre for Justice