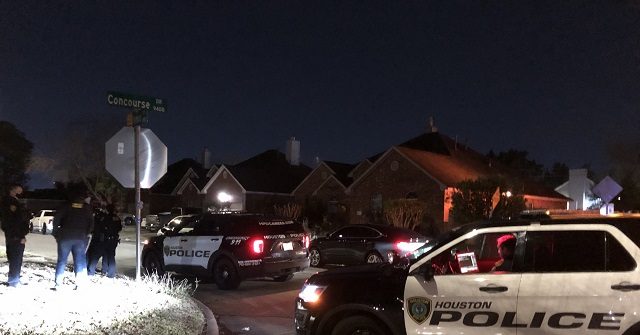 “Nine males escaped from a house where they were being held for money to pay back their traffickers,” Houston Police Assistant Chief James Jones said in a press conference shortly after midnight Sunday morning. “They ran to a local business and restaurant to get help.”

Jones said officers responded to the restaurant and got help for the escaped migrants who had been smuggled more than 350 miles into the U.S. interior. The officers then turned their attention to trying to find the location of the suspected human smuggling stash house.

The migrants, all male, advised there were approximately 15 other victims being held at the stash house in southwest Houston. The hostages include women and children, the migrants advised.

When police located the stash house, the remaining migrants and the human smuggler were gone, Jones stated. The house is located in far southwest Houston near Beltway 8 and Interstate 69 (Southwest Freeway).

“We have no suspects in custody,” Jones continued. “There are approximately three to four people we believe to be involved in this.”

Jones said investigators gathered evidence at the scene that could lead them to the alleged human smugglers.

Police officials did not disclose what they did with the nine men who escaped from the human smuggling stash house.

Breitbart Texas reports extensively on the abuses of migrants in these stash houses along the border and deep into the United States. Houston is frequently the scene of these types of operations after smugglers move their human cargo across the border and past interior immigration checkpoints.

Published in Crime, Human Trafficking, Political News and US News