US Convoy In Syria Attacked By Turkey-Backed Militants: Russian MoD

Russia’s Ministry of Defense announced Sunday that a US military convoy came under attack by Turkey-backed militants in Syria.

“American troops heading toward the Iraqi border have been attacked from land held by Turkish-backed militants in northern Syria, Russia’s Ministry of Defense has claimed,” according to a breaking report by RT.

Russian military sources, who have this week been seen in close vicinity with US troops amid a Pentagon draw down from border areas, reported no casualties as a result of the alleged incident.

Though the Pentagon did not immediately confirm the report, there’s been increasing tensions between Washington and Ankara over proposed Congressional sanctions on Turkey, also as the ‘US withdrawal’ from northern Syria became in reality a mere ‘partial’ draw down with American forces redeployed to ‘secure’ oil fields in partnership with the Kurdish-led SDF.

According to details from the Russian Defense Ministry (MoD), the American convoy was attacked near the town of Tell Tamer on the M4 highway, which runs parallel to the Turkish border near areas captured by pro-Turkish forces as part of ‘Operation Peace Spring’.

An official statement from the Russian MoD reads as follows:

“As part of deconfliction exchange, information has been received from the US side that on November 3 a convoy of American servicemen…was fired upon from the territory controlled by the pro-Turkish Syrian National Army.”

This follows an incident last month which involved American troops in the Syrian Kurdish town of Kobani coming under Turkish artillery fire.

Since Trump’s declared US withdrawal from the border areas due to Erdogan’s Turkish military incursion, American and Russian convoys have been seen passing each other on the roadways.

Picture pretty much sums up situation in N. Syria: Encounter of U.S and Russian military convoy on M4 highway pic.twitter.com/iiedQFJUzY (via @OmerOzkizilcik) 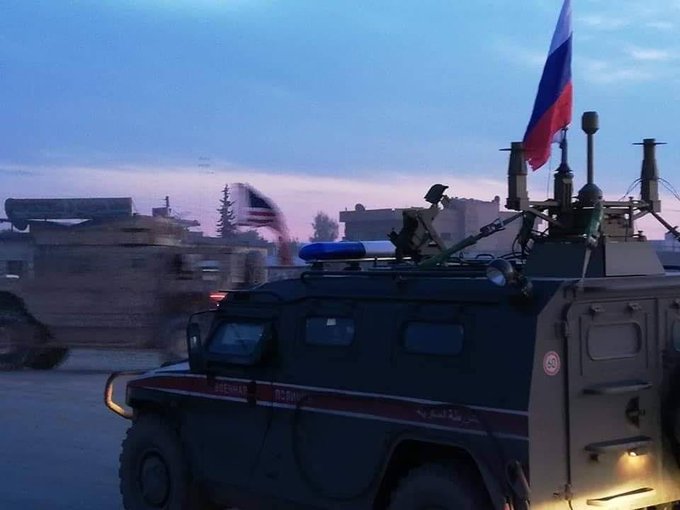 Subsequent to that mid-October incident Defense Secretary Mark Esper told reporters that US forces had permission to fire back if fired upon.

Published in Military, Syria, US News and World News